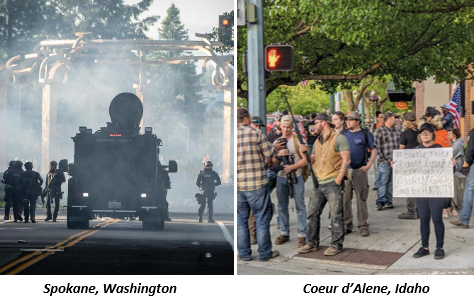 Seeing the front-page article about “Moms Demand Action for Gun Sense in America” caused me to consider what action they are demanding. The local leader said it was a coincidence of this campaign (orange ribbons on downtown trees) being immediately after the threats of violence Coeur d’Alene faced from protests. For those who thought the armed citizens downtown was an over-reaction, check “YouTube” about violence in downtown Spokane, since there was no news of it in the local paper. For those who felt protesters being bussed into our area were rumors, ask the Apple store in Spokane if it was rumors who vandalized and looted their store. Spokane is less than one hour away from us.

Local law enforcement can handle local issues, but Spokane PD could not handle their bussed in protesters and rioters. Peace prevailed in Coeur d’Alene because of citizens who stood with our community and law enforcement to maintain peace. No one’s right to free speech was thwarted and there was no violence. For those who objected to our citizens acting to defend their community, visit the looted and vandalized stores in Spokane and feel free to shop there when they reopen.

Thank you citizens of North Idaho who supported our police department and helped maintain the peace. As far as Black Lives Matter and their protests, I wonder why they do not protest in Chicago where 18 black men were killed in one recent 24-hour period or the abortion clinics where thousands of black babies are killed annually.