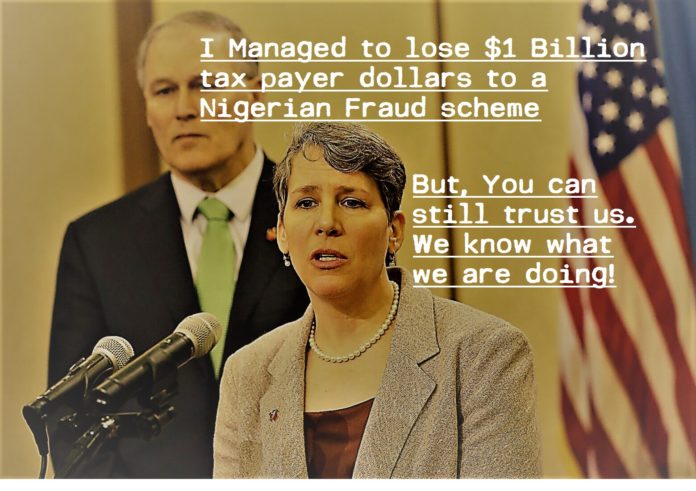 With “professionals” like Suzi Levine running state government for Governor Inslee, what could go wrong?

Washington State’s recent admission that a Nigerian fraud scam was able to extract almost a billion dollars out of Washington State’s Employment Security Department should surprise nobody.  Stories like this (and more to come in the future) are partly a result of Washington State Governor Inslee’s appointment of unserious and incompetent people to run/manage/destroy these state agencies.  This is nothing new.  However, when these clowns are in charge, circus acts are sure to follow.  Serious and competent people are rare in the Inslee administration. 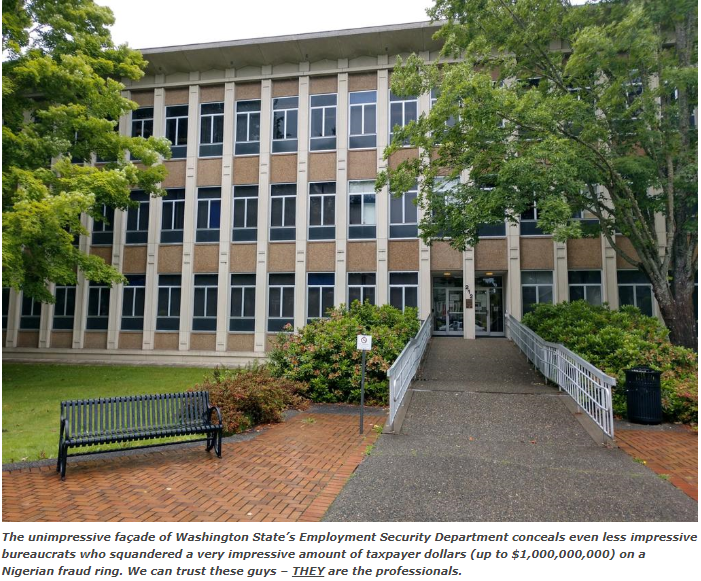 Many of us who have studied these agencies for years now are aware of the widespread, bumbling incompetence that plagues every corner of Washington State government.  The unfortunate truth is there are even more poorly run local governments to be found in Washington State.  The cities of Seattle, Olympia, and others provide plenty of examples of additional epic failures of local governance.  This race to the bottom has been in process for years.  Regardless of who “wins,” we all lose in the end. 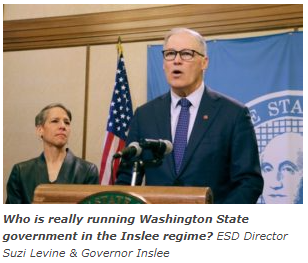 The Seattle Times recently committed an accidental act of journalism and looked closer at the appointed agency director, Suzi Levine, for the Employment Security Department.  It was clear from the article that she was underqualified, over her head, and entirely clueless about the disaster she is purportedly “managing.” She is just watching the disaster unfold just like the rest of us, and carefully drip, drip, dripping the bad news out over time, hoping that the tame media loses attention.  Her pre-disastrous tenure at ESD was a stint as a United States Ambassador to Switzerland and Liechtenstein in the Obama administration. Levine earned that prestigious position by being a successful political fundraising bundler (at least $2.4 million for Team Obama), and a frequent donor to Governor Inslee and his political friends.  She and her husband are no strangers to scams, having reportedly lost almost a million dollars to Bernie Madoff’s investment ponzi scheme a few years ago. Effective fundraising is a useful skill, but is poor preparation to run a dysfunctional and incompetent state agency.  This is true and obvious to most people, but skills and relevant abilities are low priorities for Washington State Governor Jay Inslee.  Inslee’s priority is political group think, political purity, and campaign contributions.  Hopefully, the Seattle Times will start looking at some of these other agencies and who “runs” them as well. 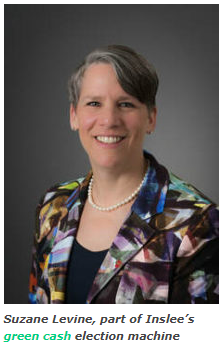 For now, however, the Nigerian fraud scam has mocked Washington State’s Employment Security Department and blown another billion dollar hole in Washington State’s budget.  Many state workers will be laid off directly as a result of this incompetence, and the clowns “in charge” will move on to some other plum political appointment.  This is how it works in the political monoculture of Washington State. Keep in mind, there are also tens of thousands of green reasons Governor Inslee will NOT fire Suzi Levine for exposing the circus of clowns at the State Employment Security Department. Here are just a few local green reasons (Suzi Levine and her husband Eric made the following local political contributions over the past 12 years):

Yeah, Governor Inslee is not going to discipline this green money train for him and his friends, no matter how incompetent they are or how much tax payer dollars they waste. 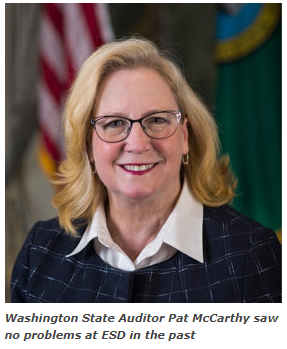 Of course, this fiasco wasn’t entirely the result of incompetence.  As I’ve said before, an ocean of incompetence can easily conceal  a mountain of corruption.  A significant challenge faced by voters who demand accountability in Washington State is the bureaucracy itself which is entirely incapable of policing itself.  Bob Ferguson, Washington State’s hyper-partisan Attorney General focuses state resources on suing political enemies and his office will be defending the corrupt state employees who enabled the theft of a billion dollars from the state taxpayers.  The State Auditor, Pat McCarthy, ran for office on a policy of cooperation with these agencies (we don’t want to step on anyone’s toes).  Her office signs off every year on their “audits” of ESD.  The State Auditor today functions as window dressing and part of the costume set for bureaucrats to claim they were “audited” and “passed without findings.”  The State Auditor will see no evil, hear no evil, and denies that any evil ever existed in the first place.  The group-think political coverup on this circus is business as usual – and the tame media will give them a pass every time.

This has not been the first act in the Inslee clown show of government.  Earlier warm up acts included crowd favorites like these: 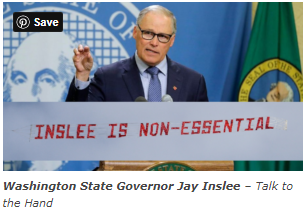 Governor Inslee has never shown much concern about the harm he has inflicted on the state.  Few consider him a policy wonk or even very knowledgeable about what the State of Washington is doing under his “administration.”  I have interviewed state employees who were required to make reports directly to state Governors.  They have told me, first hand, that when they would make policy presentation updates to former Governor Gregoire, she would look at them, engage, and ask questions.  When they made presentations to Inslee, he would just sit there, ignore them, and play with his phone.

The state bureaucracy is, at best, running on autopilot, and at worst creating the perfect environment for more incompetent clown shows like sending $1,000,000,000 to Nigerian fraud rings while stiffing genuinely unemployed workers in the state.  In Olympia, the circus is always in town. Governor Inslee has many more clowns in the upper echelon of state government sure to entertain us in the future with more performances to follow. 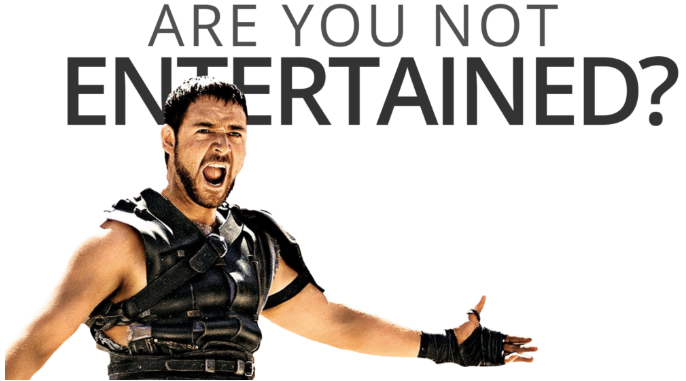