STOP THE COVID-19 TRACE ACT. TELL TRUMP TO VETO IT! 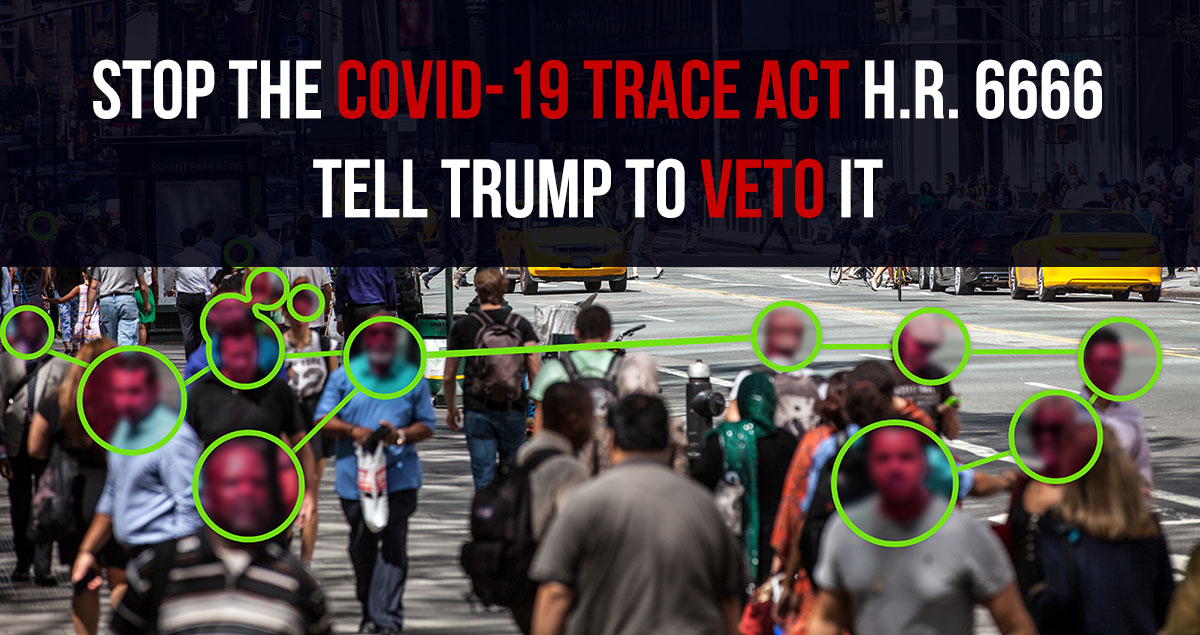 STOP THE COVID-19 TRACE ACT. TELL TRUMP TO VETO IT!

You and I are living in perhaps the most dangerous times in American history. Certainly we are experiencing the most concentrated attacks on our American liberty.

That’s why I’m asking you to sign this urgent email to President Trump to call on him to stand strong against these forces of tyranny who are relentless in pushing their agenda to destroy our way of life.

Specifically, the email urges him to veto the TRACE Act (H.R.6666) if it passes Congress and reaches his desk. TRACE stands for Testing, Reaching And Contacting Everyone.

H.R. 6666 is the beginning of a major effort to enforce mandatory vaccinations, and it means government may come to your home and demand that you take a COVID-19 test. And, according to some experts on the issue, if you test positive, that could mean that government will make sure you stay at home.

What is not clear is how this would be enforced. And that should give you chills.

The TRACE Act is sponsored by Illinois Congressman Bobby Rush, a former member and founder of the Illinois chapter of the Black Panthers in 1968.  Rush’s mentor was 1960’s radical Stokeley Carmichael, who coined the phrase “Burn Baby Burn” to incite violence in ghetto neighborhoods.

And the bill currently has 64 co-sponsors – all Democrats, and it’s rushing though the House of Representatives.

The TRACE Act will provide federal grants to agencies and states for Contact Tracing and the creation of teams to carry it out.

The bill calls for $100 billion to be controlled by the Health and Human Services and the Centers for Disease Control and Prevention. Those agencies will then distribute the money to local governments to carry our COVID-19 testing. Specifically the money will be spent to hire, train, and pay Contact Tracing teams to run mobile testing units going door to door.

Right now, even before the bill is law, several states, including Texas and Washington, are rushing to create their own Contact Tracing teams that may well number up to as many as 4,000 members in a state.

An ARMY of TRACERS!  A “Germ Gestapo”!

A Texas-based technology company called MTX Group is leading the way to create Contact Tracing apps to be used by health officials, airports, schools, and government officials to track our movements and our interactions with others.

Just as the name of the bill says, Testing, Researching and Contacting Everyone. It is the destruction of personal freedom and privacy rights, all in the name of a virus panic that has proven to be less dangerous than first thought.

And the forces behind it intend to keep it going as long as they can in a blatant power grab that affects every part of our lives.

One major push now is the possible creation of “Immunity Passports.” This is already being seriously considered by the major airlines. The International Air Transportation Association (IATA) said “We foresee the need to collect more detailed passenger contact information which can be used for tracing purposes.”

The IATA report went on to clearly say …”the data should be collected in electronic form and in advance of the passenger arriving at the airport including through eVisa and electronic authorization platforms.”

And the MTX Group will lead the way in creating this technology. How long will it be before such a document is required for your kids to enter their school, for you to enter your place of work, or to get inside any store or salon?

And it will all be funded under Former Black Panther Bobbie Rush’s Bill, H.R. 6666!

That’s why President Trump must stand strong to block this destruction of American Freedom. He needs to know that you and I will support his veto.

With thousands of signed petitions to President Trump we can show a force of resistance to Nancy Pelosi and the Democrats behind this outrageous Bill. In that way we can possibly stop both the House and Senate from passing the Bill – because they will know President Trump has the support to veto it..

That’s why he needs to know you and I are behind him. Please let him know by signing this petition calling on him to veto H.R. 6666. I hope you will do it right now!

I intend to do everything I can to stop this outrageous Bill and expose these forces of tyranny who are using this Covid-19 to destroy our precious American freedoms.