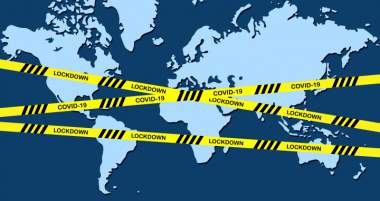 Are politicians now continuing the lockdowns because admitting error — that they’re guilty of advancing one of American history’s greatest blunders — would mean political destruction? Are they continuing to destroy the careers of millions to save their own (when, perhaps, something more sinister is not at work)? Many may now draw this conclusion after yet another study, this one by establishment company JP Morgan, has found that the lockdowns have done nothing to alter the Wuhan coronavirus pandemic’s course.

As the Daily Mail reports:

Falling infection rates since lockdowns were lifted suggest that the virus ‘likely has its own dynamics’ which are ‘unrelated to often inconsistent lockdown measures’, a report published by the financial services giant said.

Denmark is among the countries which has [sic] seen its R [infection] rate continue to fall after schools and shopping malls re-opened, while Germany’s rate has mostly remained below 1.0 after the lockdown was eased.

The report also shows many US states including Alabama, Wisconsin and Colorado enjoying lower R rates after lockdown measures were lifted.

Author Marko Kolanovic, a trained physicist and a strategist for JP Morgan, said governments had been spooked by ‘flawed scientific papers’ into imposing lockdowns which were ‘inefficient or late’ and had little effect.

‘Unlike rigorous testing of new drugs, lockdowns were administered with little consideration that they might not only cause economic devastation but potentially more deaths than Covid-19 itself,’ he claimed.

The JP Morgan report includes graphs [below] showing that ‘the vast majority of countries had decreased infection rates’ after lockdowns were lifted.

JPMorgan has a devastating piece arguing that infection rates have declined — not increased — in states where lockdowns have ended, “even after allowing for an appropriate measurement lag.” (Kolonavic)

Same goes for various countries, adds JPM. “This means that the pandemic and COVID-19 likely have its own dynamics unrelated to often inconsistent lockdown measures that were being implemented..”
(2/x)

Note that the mainstream media and Left in general have either pilloried or praised states for “opening” too soon, too rapidly, wrongly, or for being “cautious.” Yet the above pattern holds regardless.

NBC journalist Quintanilla also points out (tweet below) that study author Kolanovic has a solid, albeit possibly short, track record.

… shifting the pandemic blame to China and the WHO, and .. shifting the blame for economic pain to large blue states that are perceived to be slowing down the reopening of the economy. Indeed, allowed economic activity across the country is now largely following partisan lines”

Kolanovic’s track record is certainly better than that of Imperial College’s ever-wrong Neil Ferguson, who helped spark the worldwide lockdown hysteria with now disproven doomsday predictions; and our Dr. Anthony Fauci, who never made a prescription he was unwilling to change at the next media interview, the latest example being how he’s now against lockdowns’ perpetuation after being for it a week ago.

Where Kolanovic goes wrong is in also saying in his study, as the Express reports, “In the absence of conclusive data, these lockdowns were justified initially.” Now, perhaps the researcher is simply trying to give pro-lockdown politicians a face- (and career-) saving way to end the insanity, but the truth is revealed with a simple question:

What do you do in the face of inconclusive data, go with the default or with some grand, untried experiment? The devil you know or the devil you don’t know?

We went with the latter and now, the Express also writes, “Economists have predicted a global recession to rival that of the Great Depression of the 1930s and already millions of workers have lost their jobs” due to the lockdowns. And something was overlooked.

One of the most outrageous and oft-repeated pandemic-related lines — reflecting stupidity at best and demagoguery at worst — is “The choice is between lives and the economy.” The vicious, ad hominem version is, “You care about money more than people’s lives!” But that was never the choice.

It is and always was, at worst, a choice between lives lost to a pandemic on one hand, and the economy and (perhaps far more) lives lost due to economic distress on the other.

Yet there’s also a third possibility: that there were actually more pandemic-caused deaths because of the lockdowns. How?

Remember, dispersing your resources and focus among everyone — even those not needing them — means there won’t be as much focus where necessary. For example, approximately 30 percent of America’s virus deaths have occurred in New York, and 58 percent of those have been NYC nursing home residents (in Minnesota, 70 percent of the deaths occurred in nursing homes).

Is it possible that this number could be lower if — instead of trying to quarantine the whole population and acting as if everyone was at high risk — we applied laser-like focus on the vulnerable groups?

But common sense reveals the main reason why lockdowns were never justifiable. Consider: Imagine your child is sick and doctors say that, given how what ails him is a new disease, they’re not sure how to proceed. If you had to choose, would you select the tried and true treatment?

Or something new with no track record at all?

Forgotten here is that nationwide lockdowns were — much like Marxists’ collective farms — a big experiment. We’d never tried such a thing before. Given this, robust debate was necessary.

Instead, as with the Marxists, dissenters were called names, shouted down, and silenced. Even a popular video featuring Dr. Knut Wittkowski, who counseled against the lockdowns, was removed by YouTube. Never mind his status as former longtime head of the Department of Biostatistics, Epidemiology, and Research Design at the Rockefeller University in New York City (YouTube techies should control health policy, I guess).

Really, this is all reminiscent of what happens with moral issues today. People will argue, let’s say, about school sex education and contrast the explicit, prurient variety with abstinence programs. What ensues is endless debate about pregnancy rates, STD prevalence, this, that, and the other thing, with people talking till blue in the face. Yet something is forgotten about what to do when in doubt, when statistics and data don’t tell the tale:

You go back to the tried and true — to basic principles.

With sex education, you return to the dictates of chastity, a virtue.

And with respiratory disease, you lean on the principles of epidemiology. You allow people to behave normally and establish “herd immunity” while isolating and protecting vulnerable groups, and the virus can then be “exterminated” in weeks, as Dr. Wittkowski put it when discussing our pandemic. You don’t stop life cold.

To be frank, it’s tiresome hearing that lockdowns were initially justifiable because we “couldn’t have known.” I and many others counseled against these drastic measures all along. Moreover, scientists tell us that thousands more Wuhan virus-like pathogens lie in wait in nature. We will be confronted with similar future pandemics, and the only way to avoid repeating our historic blunder is to expose it for what it is.

An “Oops, sorry, we couldn’t have known” doesn’t cut it.