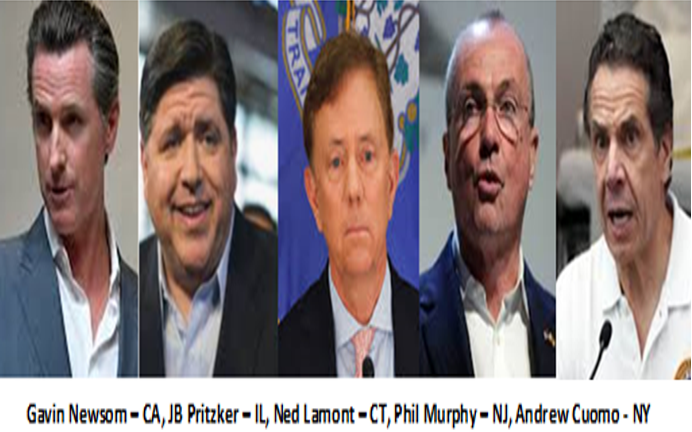 I want to report a robbery in progress. Be on the lookout for the governors of California, Illinois, Connecticut, New Jersey, and New York.  They are attempting 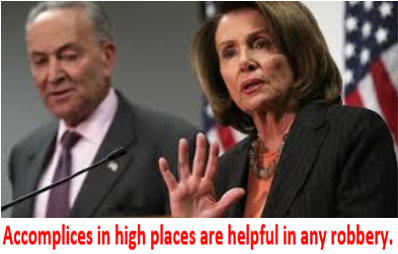 to steal from the federal treasury in order to make up for decades of unfunded liabilities.  Known associates include Nancy Pelosi and Chuck Schumer.  They should be considered manipulative and dangerous and likely to stab innocent Americans from behind.  Caution is advised.

I only partially jest.  Right now, most Americans think the biggest story in the country is a virus from Wuhan, China that has shut down their places of business and forced their families into house arrest.  That’s only part of the story. There’s another part being actively gamed out by shady political operatives in the smoke-filled back rooms of every “dark blue” statehouse, city hall, and precinct captain pool hall around the country: how they can turn this once-in-multiple-generations “black swan” economic catastrophe into a goldmine that gets them out of hock with their many creditors.  The Democratic Party is attempting to cash in on the nation’s current pandemic fears so that they may finally dig themselves out from the mountains of debt they’ve created through vote-buying schemes and interest group bribes that have kept them in continuous power of their state and city governments while creating the most financially insolvent treasuries in the nation.

The truth is that our present pandemic nightmare has set in motion an event that has been fermenting for over fifty years.  Corrupt Democrat politicos have been fraudulently using the tax-and-spend powers of their offices to keep their natural constituencies financially beholden to their electoral success for generations and generations with no immediate plan for solving their growing financial albatross except the ephemeral hope that one day, somehow, they’d be able to offload the cost of all that graft and corruption onto the federal government’s tab for the national taxpayers from faraway states to pay.  Great-granddaddy Democrats who paid off dock workers or butchers or ice vendors for their votes by robbing from the treasury taught the lesson from one generation of grifters to the next, who used the same neat trick with ethnic groups and public unions and anybody else who saw no problem with getting rich and powerful in the present day while leaving the bill for future generations to settle.

Along the way, those same “ballot-harvesters” let each generation in on a dirty little secret: the outrageously generous pension plans and health benefits and other financial perks they handed out over the years had grown so big that they could never be paid down without the federal government’s help.  Since Uncle Sam would never let them go bankrupt and destroy the financial health of American citizens trapped behind blue state lines, their state and city money pits were simply “too big to fail.”  Someday, some public emergency would set off a cascading economic calamity that would finally allow them to sweep up all the “debt for votes” Democratic Party deficits into one giant, inscrutable, and byzantine federal bailout.  And young Democrats are today calling up their old corrupt grand-pappies or toasting the ones who have long since departed and saying, “Here at last, all our great sins will be washed away, so that we may begin buying votes again with a clean slate.”

Think how excited these liars are right now.  They’ve been planning this great train robbery since the time that masked men on trains meant something else entirely from today.  Now that the moment has come to wipe generations of debt clean, they must be beside themselves.

There is simply no way the Democrats can afford to let this crisis go to waste.  It has been built into the pricing of their political calculus for too many years.  They may never have another chance to so masterfully settle all their accounts in one fell swoop.  So when Senator McConnell publicly suggested a couple weeks back that states in financial distress should consider utilizing the nation’s bankruptcy laws, Senator Schumer’s fire-and-brimstone reaction came not from some deep legislative wariness that doing so might open up a Pandora’s box of unintended consequences for the United States, but rather from an understanding that the creditworthiness of blue states would be so effectively destroyed that their tradition of using the treasury as a piggy bank for buying votes would come to a sudden and unavoidable end.  Right now, the Democratic Party’s model of doing business is on the line.

It is also why Gavin Newsom will continue to hold California’s economy hostage, and why J.B. Pritzker and Phil Murphy and Andy Cuomo and Ned Lamont will continue to do the same with their states.  They have viewed this national shutdown as simply an opportunity to sink America into another Great Depression that wipes out President Trump’s re-election chances.  (In fact, those ambitious Democrats stand a better chance at winning the White House in 2024 if the Republican president stays in office and they can avoid having to mount campaigns against Biden or his heir apparent.)  Instead, blue states are playing a dangerous game of “chicken” right now in which they sacrifice their own state economies and the futures of all their residents in an attempt to force President Trump and Senator McConnell into giving them what they so desperately crave — the financial salvation of their political party.  It does not matter how few cases of the virus continue to show up on the West Coast; Newsom will make sure California stays closed.  It does not matter how many Americans or their businesses continue to suffer along the Acela corridor; the blue states will hold out for their government bailouts.  Their offer to President Trump is as simple as it is crude: fund our past corruption or try winning in November without the help of our economies.  It’s a Faustian bargain that only the Democrats could see fit to propose.

In plain sight and in broad daylight, the Democratic Party is right now extorting the president and attempting to rob the country blind. Except quite a few Americans refuse to look the other way and become their accomplices.  Let’s not swap temporary peace today for the Democrats’ promise to make future generations their new economic hostages down the road.  The blue state model of graft and political cronyism must finally die.