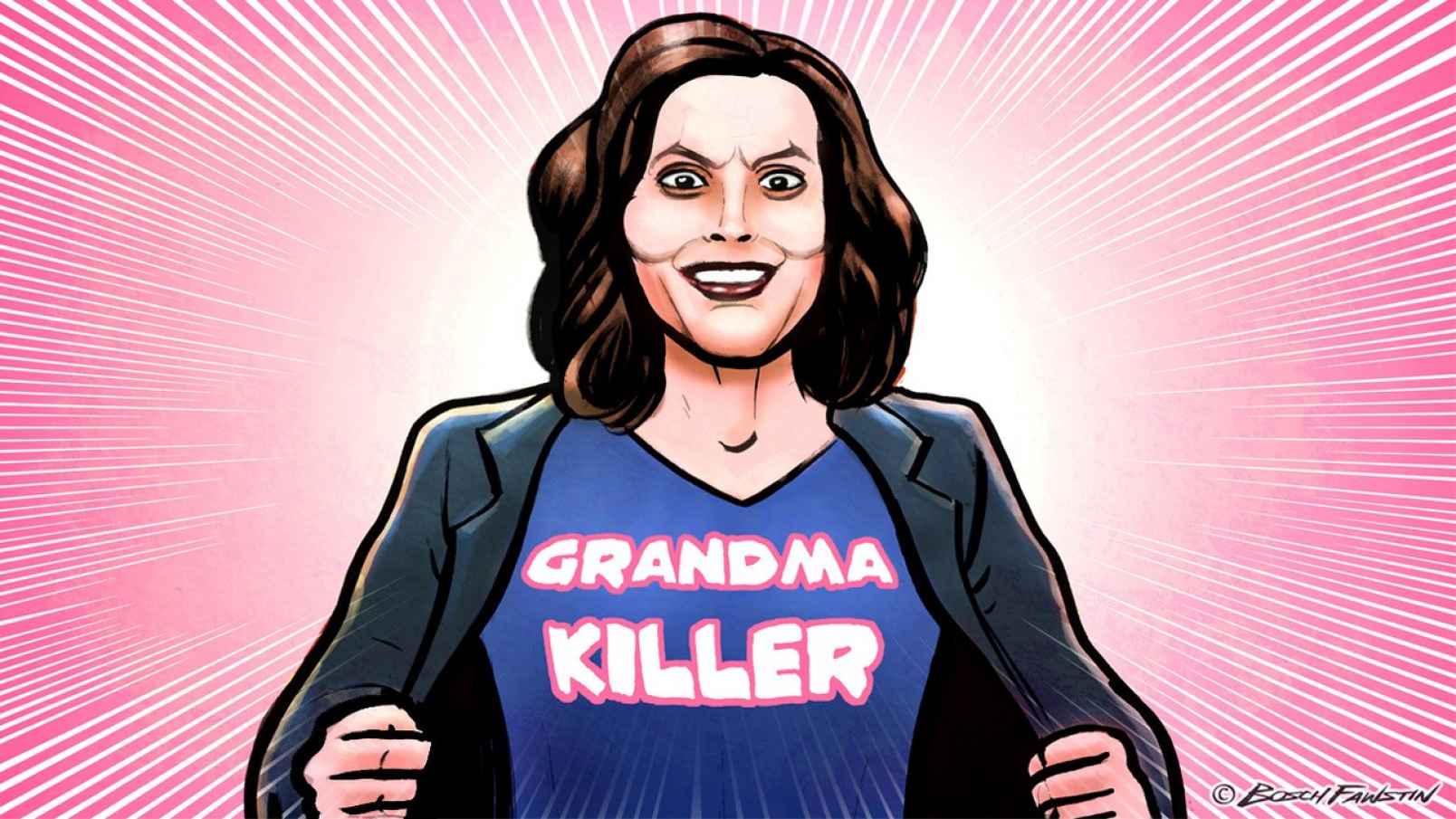 When the lives of thousands of grandmas matter less than the shooting of one thug.

In April, Governor Gretchen Whitmer posed and primped on The Daily Show in a “That Woman from Michigan” t-shirt as a narcissistic slam at President Trump. That same month, that woman from Michigan issued an executive order, that the Daily Show and SNL didn’t mention, “protecting” residents of long-term care facilities, by forcing nursing homes to admit patients infected with the coronavirus.

Her order dictated that a “long-term care facility must not prohibit admission or readmission of a resident based on COVID-19 testing requirements or results” and told hospitals to discharge coronavirus patients back to the homes they had come from. Some nursing homes were designated as ‘hubs’ and coronavirus patients were transferred into them, even though these facilities had uninfected residents.

Despite claims that these ‘hubs’ would carefully separate infected and uninfected patients, that didn’t always happen. While there had been a plan to move coronavirus seniors to the 1,000 bed TCF Center in Detroit which was being used as an overflow hospital for coronavirus patients, they were instead sent to nursing homes. The TCF Center only ended up treating 39 patients before being mothballed.

As of now, at least 687 nursing home residents in Michigan have died in the pandemic and 290 coronavirus patients have been placed in Michigan nursing homes. These numbers are incomplete.

Next time, Governor Whitmer goes on the Daily Show, she can wear a new t-shirt, “Grandma Killer”.

In New York, Governor Cuomo’s Health Department had issued an order on March 25th to “expand hospital capacity” by forcing nursing homes to “comply with the expedited receipt of residents returning from hospitals to NHs” and warned facilities that, “no resident shall be denied re-admission or admission to the NH solely based on a confirmed or suspected diagnosis of COVID-19.”

Cuomo has argued that no one should be prosecuted for nursing home deaths because they would have died anyway. “Older people… are going to die from this virus,” he argued, dismissing the outrage of the families of the dead. “I don’t think there’s any logical rationale to say that they would be alive today.”

“We’ve tried everything to keep it out of a nursing home, but it’s virtually impossible,” he falsely claimed.

On March 31st, New Jersey Commissioner of Health Judith Persichilli issued an order stating that in order to achieve “the expedited receipt of patients/residents discharging from hospitals”, “no patient/resident shall be denied re-admission or admission to the post-acute care setting solely based on a confirmed diagnosis of COVID-19.” It was a virtual copy of the earlier New York State order.

But before New York and New Jersey had even made their move, Governor Tom Wolf’s grandma-killing administration had ordered Pennsylvania nursing homes to accept “readmissions for current residents who have been discharged from the hospital” in order to “alleviate the increasing burden in the acute care settings” including “patients who have had the COVID-19 virus.”

Wolf’s Secretary of Health, Dr. Richard (Rachel) Levine, had transferred his own mother out of a nursing home and to a hotel.

“Dr. Levine has done a phenomenal job of making sure that we do what we need to do in keeping Pennsylvanians safe,” Governor Wolf insisted.

That phenomenal job amounts to 2,529 coronavirus deaths in nursing homes or 68% of the state’s deaths.

On March 30th, Governor Newsom’s administration warned skilled nursing facilities that they “shall not refuse to admit or readmit a resident based on their status as a suspected or confirmed COVID-19 case.”

“I’m not taking in a COVID-positive patient for the sole purpose of emptying one hospital bed. In two weeks, I’m sending them back 20 new patients,” Dr. Noah Marco, the Chief Medical Officer of the Los Angeles Jewish Home, said. Half of California’s deaths, or 1,276, have occurred in nursing homes, though not all are the SNFs that were ordered to accept coronavirus patients.

Whitmer, Cuomo, Wolf, and Newsom have been widely praised by the media, even though their disastrous policies likely led to the deaths of thousands of senior citizens in nursing homes. There were states that got it right, protecting senior citizens by barring the transfer of coronavirus patients to nursing homes, requiring negative tests before a transfer, and creating separate facilities.

5% of the residents in New York nursing homes are dead, that’s grandma-killing on a genocidal scale.

While New York had banned testing as a basis for nursing home admission, in Florida, a “COVID-19 test must be negative prior to transfer to a post-acute facility”.

The media falsely claims that after at least 12,000 dead grandmas and grandpas Cuomo, Whitmer, Murphy, and Newsom did a wonderful job, and DeSantis did a terrible one. Their measure of success isn’t in grandmas saved, but in small businesses shut down, people terrified, and government power made absolute.

And if the media gets to write the history of the pandemic, that is what our children will be taught.

They will learn that in an emergency, wise governors listening to learned experts deprived people of their civil liberties and stopped a catastrophe that could have been much worse. That revisionist history will become the model for handling future crises. A big lie paid for in countless thousands of lives.

The big lie must not be allowed to stand and the truth must shake our political system until it rings.

“Who can we prosecute for those deaths? Nobody. Mother Nature, God?” Cuomo asked rhetorically.

Governor Cuomo says that no one should be prosecuted for the nursing home deaths. He’s wrong. The prosecutions should begin with him and tear through the bureaucrats who made and implemented those decisions. Millions of people trusted Cuomo and other Democrat officials to keep them safe. Instead they seized power, abused their authority, and killed enough grandmas to fill miles of cemetery.

The grandma-killing governors must be brought to justice.

When a violent thug was shot by a police officer in a small city in Missouri, the Obama administration came down on Ferguson with an iron fist. How is it possible that thousands of nursing home residents can die, that grandmothers and grandfathers, that 127 veterans in New Jersey’s state-run nursing homes, that 5% of New York’s nursing home population can perish with less care than the concern about a thug?

What do we amount to as a country if we not only let that happen, but let them get away with it?

Thousands of men and women who worked all their lives and paid their taxes, who raised families, who wanted to watch their grandchildren grow up, died in large enough numbers that their bodies piled up in sheds, and the same nation that ground to a halt for Michael Brown and Freddie Gray shrugs. Where is even a fraction of the outrage that has been lavished on Ahmaud Aubrey for those thousands of wrinkled men and women, black and white, gasping out their last breaths in nursing home beds?

Cuomo, Whitmer, Murphy, and Newsom did not believe that they were worth saving. If we do not speak the truth, if we do not fight for justice for them, then are we as a nation really worth saving?