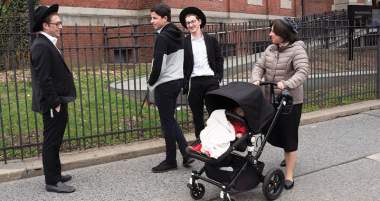 Big Brother has been calling the shots on school kids for decades. Is the next step a mandate for all?

Major media assure us that help is on the way. “There are reasons to be optimistic about a coronavirus vaccine,” declares The Guardian, “but it will take time.” Public health officials give a 12- to 18-month window, though an experimental version for high-risk groups is said to be on the fast track. Worldwide, as media primes a quarantine-weary public with promises of a quick fix, some see red flags.

Recalling what happened in the 1970s when Congress helped speed a swine flu vaccine to rapid approval, former Texas Congressman Ron Paul, a medical doctor, says he voted against the measure. “They rushed the vaccine through,” he told Dan Dicks in an April Press for Truth interview. “The vaccine was not properly made…. It caused a lot of harm. More people ended up dying from the inoculation than died from the flu that year,” while others suffered serious complications from the faulty med. “But that’s what happens when governments get involved and you do things for political reasons.”

There is even more cause for alarm about a premature coronavirus vaccine because, instead of simply making it available for those who want it, government may force it on everyone. As Dennis Behreandt reveals in the cover story of this edition of The New American, officials are now considering a federal mandate and national immunity ID cards. Those who refuse would forfeit their freedom to shop, travel, attend school or work, etc. Disturbed at plans in the works, Attorney General Bill Barr told Fox News, “I’m very concerned about the slippery slope in terms of continuing encroachments on personal liberty.”

Unfortunately, most Americans are already desensitized to such encroachments in regard to vaccines. Though federal mandates are unprecedented, compulsory vaccines for schoolchildren are the law of the land in every state and are based on recommendations of the U.S. Centers for Disease Control (CDC). It started with only one vaccine for a truly dangerous killer: smallpox. In the 1920s, some states began requiring that children receive it in order to attend school. Kids in the 1940s began getting DTP (diphtheria, tetanus, pertussis) shots, and to the relief of many parents, polio inoculations joined the fray in 1955. Eight years later an MMR (measles, mumps, rubella) vaccine made its debut. Smallpox was eradicated in the 1970s, but the remaining seven medications, given in 23 doses, held steady for roughly two decades. Research and development exploded, beginning in the late 1980s, and vaccine requirements predictably ballooned. Since 2014, children have been receiving 69 doses of 16 inoculations starting the day they are born. Many doctors and parents question the need for them all.

Even chickenpox makes the required list in all states, though before development of the money-making vaccine, the only way chickenpox made TV ratings was on PBS Kids where government downplayed this common childhood malady. (On Caillou, the four-year-old’s mom told him, “They’re just little itchy spots. Nothing to worry about.” And on Arthur, the main character recovered in a few days, enjoying extra attention he got in the meantime.) Now CDC says chickenpox is dangerous “even in healthy children,” and vaccine sales are booming thanks to a government mandate. Cha-ching!

The agency is far less vocal about the officially reported 4,000 serious adverse events and 200 deaths associated with the chickenpox vaccine since its introduction, most cases involving children under six. News such as that spoils the party line that vaccines are safe — the inevitable response to skeptics. The reality is that, like all pharmaceutical medications, vaccines can cause harm and even death. For instance, the whole-cell pertussis vaccine was axed in the 1990s because it inflicted severe permanent brain damage. Health officials pulled the Rotashield rotavirus vaccine only one year after FDA approval because of so many severe reactions in children, including the death of an infant. Another blot on the record is LYMErix, a vaccine for Lyme disease, which lasted less than four years before class-action lawsuits linking it to rheumatoid arthritis forced it off the market.

As for the remaining vaccines, “There are no rigorous safety studies of sufficient power to rule out” complications, warns a 2019 statement to Congress from the Association of American Physicians and Surgeons (AAPS), a pro-vaccine organization that opposes government mandates. Likewise, there has never been a comprehensive investigation of the safety of the combination of drugs in the U.S. vaccination schedule.

Manufacturers have no incentive to test vaccine safety because the federal government protects them from virtually all liability when their products kill or injure patients. Federal law passed in 1986 prevents vaccine-injured victims from suing pharmaceutical companies, forcing them instead to petition the U.S. government’s National Vaccine Injury Compensation Program (NVICP), in a process that disillusioned claimants have discovered to be heavily weighted against them. In its 34 years, NVICP has paid out nearly $4.1 billion in claims but has denied far more. Through fedgov’s cozy relationship with Big Pharma, U.S. taxpayers incur the liability costs, while big drug companies reap the profits.

Acknowledging the reality of risks, states have historically allowed medical, religious, and philosophical exemptions to vaccination requirements. As regulations ceaselessly expand, however, the rights of parents to choose which chemicals are injected into their babies’ bodies are under increasing attack, even in relatively low-risk cases.

Consider what happened last summer in New York. On a single day in June, without notice or public hearings, the state legislature slipped a bill (A2371, repealing the religious exemption to vaccinate) out of committee, quickly rammed it through both Assembly and Senate, and plopped it onto the desk of Governor Andrew Cuomo, who dutifully signed it into law. What emergency called for the record-breaking pace of this bill’s approval? The 2019 measles outbreak in New York City and neighboring Rockland County.

Not exactly. In an area with a population of more than 8.7 million people, there were fewer than 1,000 measles cases all year, according to CDC data. When the top official of Rockland County catered to media hysteria by declaring an emergency and banning unvaccinated children from public places, threatening to fine and imprison their parents, a judge had to come behind him and lift the ban. There were simply not enough cases to meet the legal requirement for an emergency declaration.

Nor were these measles victims “challenging public health systems,” as the pot-stirring bastion of yellow journalism, CNN, exaggerated. In fact, of the 1,282 measles cases nationwide last year, CDC reported 128 hospitalizations and no deaths.

But desperate times call for desperate measures, and the pro-government mandate crowd needed a scapegoat — not to save people from measles, obviously, but to remove the state’s religious exemption for vaccines. They found it in two Orthodox Jewish neighborhoods in Brooklyn, having the highest concentration of measles cases in the city, as well as a high percentage of unvaccinated families. Though the community’s religious leaders confirm that vaccine refusal is not part of their belief system, New York City Mayor Bill de Blasio targeted these limited areas with a mandatory vaccine order, ignoring their civil rights and slapping a misdemeanor charge and $1,000 fine on anyone who refused. In response to the Hasidic Jewish community’s lawsuit against his tyrannical edict, de Blasio rebuffed his own constituents’ concerns in a WCBS news radio interview and bragged, “We will beat them.” And he did — courtesy of the New York legislature and bill A2371.

California has gone even further than New York. First, the Golden State used 2015’s Disneyland measles outbreak as an excuse to repeal religious and personal exemptions to its vaccine laws. (Incidentally, CDC defines the worrying term “outbreak” as three or more cases of a disease within a limited time frame. Among the 320.7 million people populating the United States in 2015, there were 188 cases, which amounts to a statistically insignificant 0.00006 percent.)

Fast forward to September 2019, a few days after the New York City Health Department declared its outbreak over. That’s when California’s governor signed two bills imposing the strictest vaccine law in the country. The draconian measures place doctors who grant more than four medical exemptions per year under investigation by the Department of Public Health. Both public and private schools with student bodies that do not meet a 95-percent vaccination minimum are also scrutinized. State officials can even revoke current medical exemptions that they deem inappropriate. In other words, bureaucrats can overrule your doctor.

Were these measures necessary to stem some tide of murderous measles mayhem in the state? Hardly. Only 73 Californians caught the virus in 2019 (a whopping 0.0002 percent), and no one died, according to the state’s public health department. Those 73 not only survived but now boast life-long immunity to the disease, a boon the vaccine cannot supply.

Obviously, measles isn’t the deadly killer that bureaucrats and their propaganda-peddling media cronies claim. In fact, CDC data reveal that nationwide only two measles-related deaths have occurred in the U.S. since 2003, out of 3,724 cases. That’s a rate of 0.05 percent, hardly equivalent to the CDC claim that death strikes between one and three of every 1,000 measles victims “even with the best care.” Yet none of these facts have stopped California from usurping the role of a doctor who, unlike a bureaucrat, is actually licensed to practice medicine. When government so decidedly overreacts to such a non-emergency, it doesn’t take a brain surgeon to tell that there is an agenda afoot.

Even if there were no threats imposed on individual patients by this cookie-cutter approach to medication administration, it’s disconcerting to ask: What limits can be placed on the power of a government that can tell you what you must inject into your own body or your own children? And despite any threats from coronavirus, do we really want to hand control over our medical decisions to Uncle Sam, when our rights at the state level are already in such jeopardy?

Rebecca Terrell, a contributor to The New American since 2009, writes on science and energy topics. She is a licensed nurse in Tennessee and holds a master’s degree in marketing.

This article originally appeared in the May 18, 2020 print edition of The New American. The New American publishes a print magazine twice a month, covering issues such as politics, money, foreign policy, environment, culture, and technology. To subscribe, click here.