Gov. Little is solely responsible for the demise of Idaho businesses 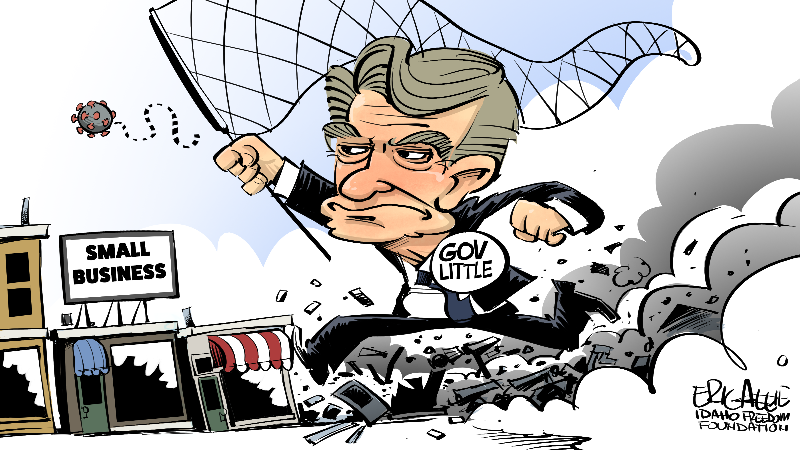 Gov. Little is solely responsible for the demise of Idaho businesses

It was difficult to watch Gov. Brad Little’s press conference Thursday. Not just because of the eerie masked government official silently hovering in a corner six feet behind and to the left of the governor in his ceremonial office. But also because of the way the governor handled his announcement that he would permit restaurants and salons to open in 48 hours. Given the circumstances, his press conference struck me as too self-congratulatory.

Related: Small businesses have been devastated by the government’s actions. Click here to help them fight back.

“We leaned on science and timed our closures right,” Little bragged. He then credited his administration for giving out grants and protective equipment to Idaho businesses, and then added he was moving bars from a mid-June restart to possibly, hopefully later this month. As with this announcement, bars will probably learn their legal start date a couple of days before, and that’s just sad.

Reopening a business isn’t like switching on a light. Some businesses will be able to pull it off. Others can’t. Not knowing what decision Little might make, some restaurants have waited to restock the inventory needed to open. It’s tough to load a cooler with meat and produce when you’re broke and you’re not sure you’ll ever get a green light.

Others don’t have the staff. Servers, cooks, and cashiers won’t be back, perhaps because they’ve moved onto other jobs, or because they’re happy receiving unemployment benefits that, in Idaho, can easily be more than their paycheck. Restaurant owners have told me of having to hire entirely new teams of employees who don’t know the menu or may have never worked in a service industry job. Getting them up to speed is going to take time.

It didn’t need to be like this. Little had a choice. He could have gone the route of seven other governors who refused to order businesses to shut down and allowed them to make the decisions that were right for their employees, customers, and vendors. He could have avoided making arbitrary distinctions between essential and non-essential businesses. He could have allowed restaurants to resume operations without requiring them to fill out new government forms.

He could have made more frequent analyses of the Covid-19 situation. Little planned announcements about entering new phases of re-opening at two week intervals. Instead, he could have mitigated worries with more frequent updates.. Daily or tri-weekly assessments ould have alerted Idahoans as to whether or not his data was showing critical criteria being met. This would have allowed businesses to plan better..

He could have allowed parts of the state largely unaffected by Covid-19 to remain open or re-open after putting in place new safety protocols. His decisions were heavy handed. That those decisions were made with the backing of his health experts doesn’t make it any easier on those affected.

Little started out this pandemic on the right track. He appropriately used his authority to rescind those regulations that hindered diagnosis and treatment of Covid-19. He took steps to curtail state spending, forecasting ahead that there will be a substantial decline in tax revenue.

But then came his shutdown commands and his stay-home order. He followed those up by citing a martial law statute and “declaring an extreme emergency.” Those decisions make his ongoing promise to run the state “with the lightest hand of government” contradictory. To this day, Idaho State Police investigators are fanning out to threaten businesses with the loss of their licenses if they don’t adhere to the governor’s “schedule” for reopening. It’s been heartbreaking to read stories about Idaho entrepreneurs whose investments have evaporated and whose dreams have been destroyed — not by Covid-19 but by a politician they might have even voted for. Say what you want about the governor’s response to the pandemic, it didn’t have to be this way. He, alone, is ultimately responsible for the demise of many Idaho businesses and jobs. This is no time for a victory lap.