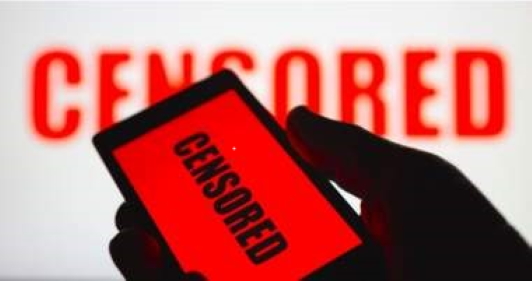 Citing concerns about “misinformation” surrounding the coronavirus, major social-media platforms and technology companies including YouTube, Facebook, Twitter, Google, and more are cracking down on free speech like never before. Facebook even created a panel to censor the social-media site that is dominated by foreigners who reject free speech and the U.S. Constitution’s First Amendment.

In the case of YouTube, the Big Tech giant literally said it will remove any content that goes against recommendations made by a corrupt United Nations agency that has been serving as a propaganda megaphone for Communist China. Top UN officials have also stepped up calls for Orwellian online censorship.

In short, the Silicon Valley elites and their Deep State allies want to do your thinking for you and determine what information you get to see — and what information to hide from you. They claim to believe you are too stupid to sort truth from fiction without their help. Seriously.

But the backlash to the censorship is growing stronger every day, potentially threatening the virtual monopolists’ stranglehold on the Internet and the flow of information. Already, cracks in their grip are starting to show, as Americans — especially conservatives — overwhelmingly recognize the bias in favor of establishment propaganda.

Perhaps nowhere was the frantic effort to silence dissident voices more obvious than in the campaign to disappear the “Plandemic” interview with Dr. Judy Mikovits. Claiming the video contained “misinformation,” both YouTube and Facebook went wild trying to stop it, constantly removing it as a violation of their terms of service.

The effort to delete all traces of the video and information from YouTube came shortly after the CEO of the video-streaming service dropped a bombshell on the far-left CNN, widely ridiculed by the president and millions of Americans as among the fakest of fake news outlets. “We also talk about removing information that is problematic,” said YouTube boss Susan Wojcicki on “Reliable Sources.”

Ironically, it is the WHO, blasted as “China-centric” by President Trump, that has been actively and knowingly peddling “misinformation” to the world. Most recently, of course, WHO boss Tedros Adhanom Ghebreyesus, an actual Marxist revolutionary ridiculed as an attack poodle for Beijing, was caught parroting Communist Chinese Party propaganda as if it were true, including the claim that there was no human-to-human transmission.

One of the most outrageous examples of WHO disinformation was Tedros and WHO lashing out at countries such as the United States for imposing travel restrictions on travelers from China. Among other concerns, the former Marxist right-hand man of Ethiopia’s murderous dictatorship claimed Trump’s measures would increase “fear and stigma, with little public health benefit.”

These incredible trends were recently satirized by the Babylon Bee, which ran an absolutely hilarious satire piece headlined “YouTube Removing All Videos That Don’t Begin With The Chinese National Anthem.” The article went viral, making a mockery of YouTube’s Orwellian censorship regime.

Wojcicki’s announcement that information contradicting WHO would be removed came shortly after President Donald Trump announced that the U.S. government would cut funding to the disgraced UN agency over its dangerous “recommendations” and regurgitation of Beijing’s propaganda. Incredibly, the WHO and its top leaders have repeatedly praised the mass-murdering dictatorship’s response to coronavirus.

As The New American magazine documented last year, however, spreading deadly lies and propaganda is nothing new for the WHO. Indeed, in its war on “vaccine hesitancy,” which the agency claimed was one of the top threats to global health, the WHO developed a blatant disinformation campaign targeting medical professionals.

The training program featured sample questions that parents skeptical of vaccines might ask, along with suggested answers for the medical professionals to provide in response. One question was: “Can vaccines cause harmful side effects, illness and even death?” The WHO answer: “No, vaccines are very safe.”

Of course, this is demonstrably false, and every vaccine maker in the world acknowledges that vaccines can and do cause harmful side effects, illness, and even death. The U.S. government has paid out billions of dollars to victims of vaccines and their families after Big Pharma successfully lobbied Congress to be exempted from liability, a protection that no other commercial industry enjoys.

Yet another question listed that may be asked by hesitant parents: “Is protection from natural infection more effective protection?” The response: “With vaccines, the immune system is stimulated to develop protection without infection, hence it is more effective.” Obviously, that is not true, as whatever immunity vaccines may provide often wears off, requiring “booster” shots.

The examples above represent just a small sample of the dishonesty and the demonstrable lies included in the WHO propaganda workshop for health workers. Other strategies it proposed to wage war on skepticism of vaccines included bringing religious leaders on board, using the “mass media” for propaganda, “mandating vaccinations,” “sanctions for non-vaccination,” “non-financial incentives,” and more.

Under YouTube’s policy of removing information that contradicts WHO propaganda, any and every doctor in the world who pointed out that vaccines can and do cause side-effects would be subject to being censored and having their video removed. Ironically, because the same WHO training program admits the fact that vaccines can cause death and other dangerous side-effects later on, even the WHO could have its content removed for contradicting its own claims.

Another senior YouTube official, Chief Product Officer Neil Mohan, added fuel to the fire, insulting the content creators that have made billions of dollars in profits for the company. During an interview with Protocol Editor David Pierce, Mohan admitted that the video platform was boosting “authoritative voices,” “as opposed to, you know, it’s somebody espousing their opinions about a mask, you know, in their basement.”

“This is coming from an authoritative channel, a news source, a medical professional, and if that’s the case, we think there’s going to be some context that’s provided around the question of masks,” Mohan continued when asked how the company was doing its “moderating” in light of the ever-changing views of “authorities” and “experts” on these issues. “And even if that guidance changes, it will be reflected in sort of how an authoritative voice or channel talks about it.”

As for views and voices that the tyrants of Big Tech disagree with, algorithms are used in “removing or reducing views of the videos where that same level of authority hasn’t been established.” The New American magazine’s video content has experienced this, with drastic “shadow banning” making it extremely difficult to find TNA’s videos online. A number of TNA videos, including one featuring a leading scientist with four degrees from MIT including a PhD in biological engineering, were removed altogether, essentially being flushed down the 1984 “memory hole” with no real explanation.

Ironically, the “authoritative” voices — most of them closely allied with the Deep State — have been wrong from the start. Consider, for instance, the ludicrous models funded by billionaire Bill Gates from Imperial College in London and the Institute for Health Metrics Evaluation at the University of Washington. Both predicted millions of COVID-19 deaths. And in both cases, the silly claims have been walked back.

Those debunked models were used to set policy, though, and those who criticized them were and still are subject to extreme censorship from the Big Tech companies. But the models were wrong by orders of magnitude. And one of the “experts” behind the U.K. models, Professor Neil Ferguson, was caught violating the lockdown orders he demanded as essential for everyone else, so that he could have sex with a married woman.

YouTube is hardly alone in its efforts to silence users and do their thinking for them. Social-media giant Facebook, which has been largely rejected by younger generations, recently created what CEO Mark Zuckerberg described as “almost like a Supreme Court” that will decide “what should be acceptable speech” that “reflects the social norms and values of people all around the world.”

Just one in four of these Big Tech totalitarians even comes from the United States, where free speech is protected in the U.S. Constitution’s First Amendment. And almost every single one of the 20 members is on the left to extreme-left end of the political spectrum, with at least one working directly for George Soros’ Open Society Initiative while almost one in four of the others have close ties to the radical billionaire. Three of the 20 members are Muslims or come from Muslim nations, where criticizing Islam can be a capital offense, and at least one of those was a senior leader in the terrorist-tied Muslim Brotherhood.

Even in the United States, propaganda organs of the establishment are already peddling the narrative that the escalating Internet censorship is good, and that it should remain in place forever. In an article by The Atlantic headlined “Internet Speech Will Never Go Back to Normal,” two totalitarian American law professors even advocate for Communist Chinese-style censorship. “In the debate over freedom versus control of the global network, China was largely correct, and the U.S. was wrong,” the article begins.

Even before coronavirus, a Bill Gates- and World Economic Forum-funded “exercise” known as Event 201 at Johns Hopkins Bloomberg School of Public Health in October of 2019 made similar recommendations. The “training” scheme, which brought together bigwigs from Big Business and Big Government, imagined a coronavirus pandemic. And naturally, many of the globalists participating demanded social-media censorship as one of the key policies to deal with the supposed virus.

Today, the Deep State totalitarians are increasingly showing their true colors. As the “masses” realize they are being deceived and lied to by technocratic “experts,” politicians with delusions of grandeur, and globalist toadies, even the blatant rigging of the already rigged “marketplace of ideas” that exists on social media is not enough for the lies to compete with the truth that people are so desperately seeking. That has the establishment nervous.

For example, until being “deplatformed” from virtually every Big Tech company, Alex Jones and his Infowars operation were reaching more people just on YouTube than many of the nation’s leading establishment propaganda organs — combined — with just a tiny fraction of the budget. And so, as millions around the world wake up to the lies and manipulation of the “mainstream” media, the Big Tech companies and the broader Deep State are hoping to completely silence all those who challenge or expose them.

Fortunately, as the Big Tech crisis involving “Plandemic” illustrated, the would-be gatekeepers are failing. The more YouTube and Facebook cracked down on the controversial video, the more people went to Brighteon, Bitchute, Banned.Video, and other alternative platforms to watch it. Literally tens of millions of people watched it. In the weeks and months ahead, Americans and people who value truth everywhere should migrate away from the Big Tech giants that spy on them, manipulate them, and ultimately, seek to control them.

Alternative tech platforms and print publications such as The New American magazine can and will continue to deliver the truth — regardless of what the tyrants of Silicon Valley and Communist China think about it. Spread the word and get involved.

Freeing the Web From Big Tech

The Fall of a Philosopher King and the Attack on Liberty

Big Tech and Big Government Censoring the Internet. Who’s Next?

How Google Censors The New American (and Other Conservatives)

Published with the Permission of thenewamerican.com