It Was Obama Who Targeted General Mike Flynn 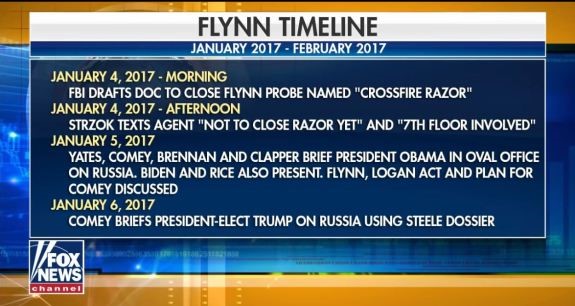 It Was Obama Who Targeted General Mike Flynn

From the beginning of the Russia – Trump collusion hoax we have had the somewhat contrarian view that the entire operation was as much or more about Obama and his people getting back at LTG Mike Flynn than it was about stymieing the Trump agenda.

It is easy to forget now, but Mike Flynn was one of Donald Trump’s most effective surrogates during the campaign. Along with a few other military and intelligence outsiders like Rich Higgins, he hoisted the pirate flag and pounded Obama and Hillary Clinton with broadside after broadside. He also helped Trump craft his America First national security platform. A key piece of Trump’s appeal to voters wary of the Obama – Clinton pro-Muslim immigration policies.

And beyond the military, political and cultural critique of Obama’s destructive policies there was the fact that Flynn had been on the inside of Obama’s intelligence apparatus and cried foul, causing Obama to push him out as head of the Defense Intelligence Agency. Flynn was, as far as we can remember, the only Obama insider to break ranks and switch sides.

In short, Flynn earned Obama’s hatred the easy way – he told the truth.

And the conspiracy to get Flynn all started long before Donald Trump ever entered the 2016 presidential campaign. As Svetlana Lokhova explained in court filings, and Adam Lovinger outlined in his whistleblower complaint, the plan to get Mike Flynn began in 2014 and involved Stefan Halper, British intelligence and former CIA Director John Brennan who put it in motion to destroy Mike Flynn before Trump was even in the race for President.

How much did Obama hate Mike Flynn? He put him in the same category of threat as Kim Jong Un, the North Korean dictator.

The warning, which was first reported by NBC in May 2017, came less than 48 hours after the November election when the Obama and Trump sat down for a 90-minute conversation in the Oval Office.

A senior Trump administration official acknowledged Monday that Obama raised the issue of Flynn, saying the former president made clear he was “not a fan of Michael Flynn.”

Note that that Obama’s November 2016 warning pre-dated the phony concerns about Flynn’s contacts with the Russian ambassador – Obama reportedly passed along a general caution that he believed Flynn was not suitable for such a high-level post, the unnamed Obama official said.

The May 2017 revelations reported by NBC came on the same day that former acting Attorney General Sally Yates testified behind closed doors about the events that led to Flynn’s eventual firing.

But what Sally Yates said didn’t come out until Attorney General Bill Barr dismissed the case against Flynn and caused the release of Yates’ testimony given before a House committee investigating the Russiagate hoax.

Gregg Re of FOX News reported Obama’s unexpectedly intimate knowledge of the details of Flynn’s calls, which the FBI acknowledged at the time were not criminal or even improper, raised eyebrows because of his own history with Flynn — and because top FBI officials secretly discussed whether their goal was to “get [Flynn] fired” when they interviewed him in the White House on January 24, 2017.

After the briefing, Obama asked Yates and Comey to “stay behind,” and said he had “learned of the information about Flynn” and his conversation with Russia’s ambassador about sanctions. Obama “specified that he did not want any additional information on the matter, but was seeking information on whether the White House should be treating Flynn any differently, given the information.”

A memo from Rice stated that Biden also stayed behind after the main briefing had ended, Mr. Re reported.

Remember – when Obama fired Flynn as head of the Defense Intelligence Agency in 2014, Obama cited insubordination, while Flynn asserted he was pushed out for his aggressive stance on combating Islamic extremism.

The topic of the disputed phone call with then-Russian Ambassador Sergey Kislyak was, among other things, another Obama policy Flynn and Trump planned to undo – Obama’s sanctions on Russia.

Or from Obama’s perspective, another act of insubordination by Mike Flynn.

It is unknown who informed Obama of the intercepted Flynn – Kislyak phone call, and it remains to be seen if Yates, Comey, Biden or anyone else will tell the full truth about what was said directly or between the lines in the January 5, 2017 “stay behind” meeting. However, one thing is clear even from the sketchy details available today – Obama was out to get Flynn and he had some willing accomplices available at the January 5, 2017 Oval Office meeting.