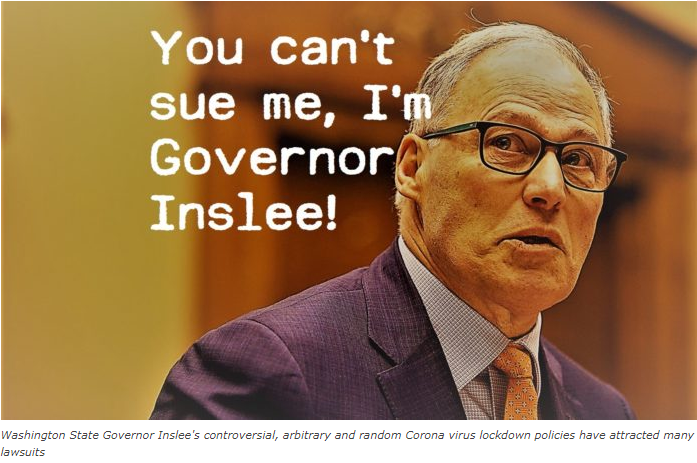 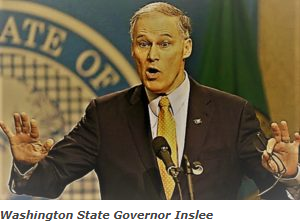 Recently, over the past few weeks, a variety of lawsuits have been filed against Washington State Governor Inslee directly related to his virus lockdown policies in response to his declaration of emergency and the various edicts and proclamations that have been treated as binding law since Inslee’s original emergency declaration on February 29, 2020 (linked here).  I’ve attempted to provide the original list of lawsuits (including links to downloadable court documents) as I am able to obtain them, and I’ll try to keep this list updated on this page as the list inevitably grows.  Governor Inslee is running for reelection for a 3rd term (see campaign website linked here).

I encourage the curious to download the original filed court documents in each case to better understand the claims and details in each (same with the state’s responses as they are acquired).  I’ve provided my own brief summary and perspective on each case, but that is no substitute for reading the original documents yourself.

Lewis County Billboard on I-5, exit 72 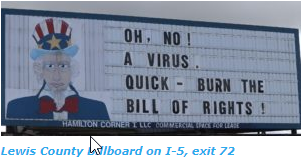 Since I doubt the tame media in Washington State will cover the status of these cases accurately or comprehensively, I hope to provide regular updates on this same article, and I’ll indicate the portions of this article which contain those updates as they occur.  If you are involved in any of these cases and have additional source documents (which I can publish and make public in this article), please provide them to me.  If you have inside information on any of these cases and believe I have missed anything or made any mistakes in my representation of these cases, please feel free to comment below, and indicate where you believe those mistakes have been made.  I will correct the post if I am in error, or I will clarify why I believe I’m accurately representing the case if we disagree. 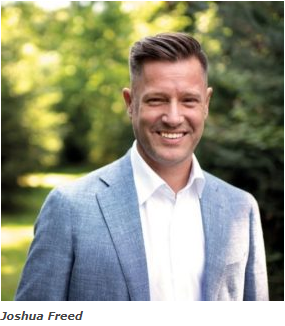 This is a Federal Lawsuit filed on April 22, 2020 by plaintiff Joshua Freed, who is a Republican candidate for Washington State Governor’s office (campaign website here).  Plaintiff’s attorney is Mark Lamb (website here).  (full disclosure – Mark Lamb has also represented this author in the past)

Essentially, this is a very narrowly tailored lawsuit targeting what appears to be obvious constitutional problems associated with Governor Inslee’s original proclamations against freedom of assembly for religious reasons and a narrowly tailored 1st Amendment case.  I’ve reviewed this case with over a dozen lawyers and most agree that the state will have a difficult time prevailing in this lawsuit, and the odds of plaintiff prevailing is very high. 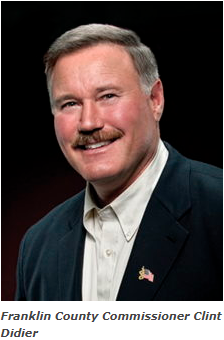 This is also a Federal lawsuit.  This one was filed on Friday, May 1, 2020 against Governor Inslee  and the plaintiff attorney is Stephen Pidgeon (former candidate for State AG in 2012 – see here).  This case was promoted by plaintiff Tim Eyman, Republican candidate for Governor (campaign website linked here). The named plaintiff in this case is Franklin County Commissioner Clint Didier. The original filing has seven named plaintiffs, but it is expected that more may be addded.

This case is mainly focused on the “essential” vs. “non-essential” designation of businesses and workers in Washington State and arbitrary method by which the state chose to discriminate with Governor Inslee’s lockdown “stay home, stay safe” orders.  This is a broader case, structured as a class action and is much broader in focus on the arbitrary and capricious nature of the Governor’s actions.  The likelihood of success in this case will hinge, most likely, less on the unconstitutional actions Governor Inslee made, and more on whether the Federal Court will be willing to more clearly constrain the emergency powers State Governors, something the Federal Courts have been reluctant to challenge in the past.

Interestingly, Governor Inslee was responsive to this case and pushed back (Fox28, Spokane story here) 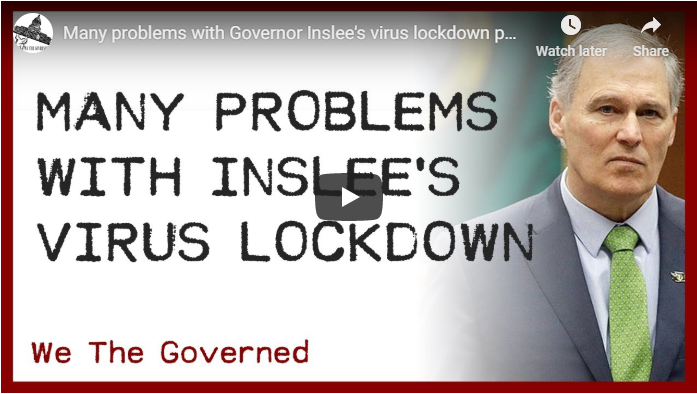 It looks like there is a fundraising link for those who want to donate to this lawsuit and #4 below. 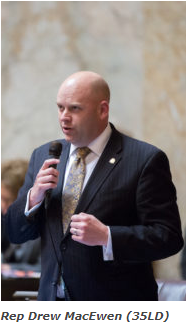 This was also a Federal Case filed on May 5, 2020.  The Plaintiff’s attorney is Joel Ard, who I recently interviewed about Governor Inslee’s virus policies in a video (linked here).  The lead plaintiffs are seven Republican Legislators, listed as follows:

Essentially, this case argues that Governor Inslee may have been justified in his initial emergency declaration, but argues that the original justification for the emergency has passed, and the extension of the emergency powers of the Governor’s office is being done in an unconstitutional manner and not consistent with the facts, and is an abuse of the powers of the State Governor. In addition to the named legislators (originally only four were in the first draft of this lawsuit), another four state residents were included in the listed plaintiffs.

It looks like they have a fundraising link to fund this case and the one linked below:

#4 – Simper vs. Jay Inslee – Schools are “paramount duty” of the state?

This is the first Superior Court case filed, so far as I know, in the coronavirus policy problems pantheon, and was filed in Lewis County Superior Court on May 5, 2020 by attorney Joel Ard (again, I just interviewed Joel Ard last week in regards to concerns about Governor Inslee’s Coronavirus lockdown policies last week – linked here). 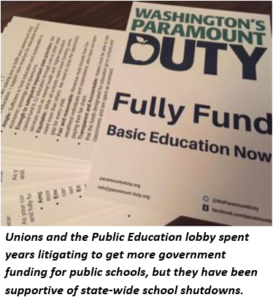 This case is particularly interesting because the Washington State Supreme Court has shown extreme deference to the power of the state in recent years and rarely recognizes any limits on that power, however, for the Supreme Court to rule against the plaintiffs in this case, they will need to essentially indicate that schools are not that “paramount” after all, and the logical contortions that this court will have to pretzel together will be impressive and disturbing.  Of course, if this were to happen, it wouldn’t be the first time the Washington State Supreme Court defied rational logic, the constitution, or recent precedent.

The original complaint is linked here.  Feel free to download for yourself.

I’ll continue to update this list and the information related to these cases as I am able and have access to the source documents.

While many people may be losing their jobs or businesses during the Corona Virus Lockdown crisis, it does appear job security for attorneys and the court system will be increasing as the public debate and dissention about recent government actions continue to grow. 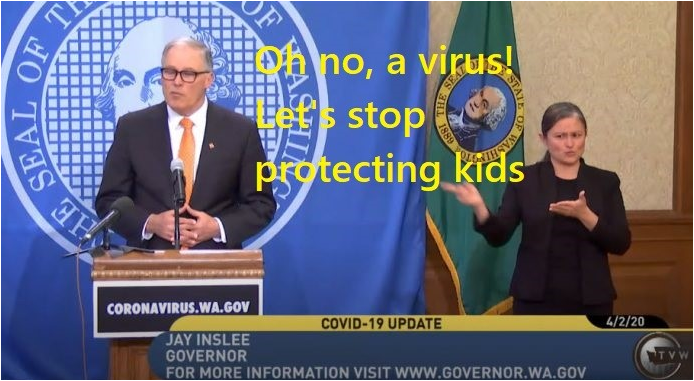 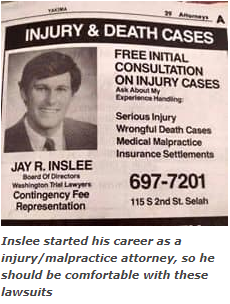