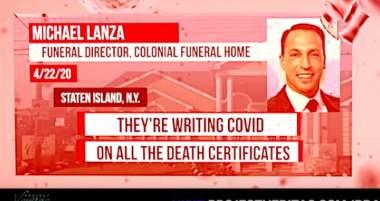 “When you subsidize something, you get more of it,” the economic principle goes. This would explain why, according to New York City funeral directors on the Wuhan Flu’s front lines, Big Apple officials are “padding” the disease’s mortality numbers, attributing deaths from other causes to the virus itself. What’s their motivation?

These claims were made in a video James O’Keefe’s organization Project Veritas (PV) released April 30, adding to the body of evidence indicating that the virus’s death toll is exaggerated. As PV summarizes:

As to these testimonials, first we have Michael Lanza, of the Staten Island Colonial Funeral Home.

“So I think, again, this is my personal opinion, I think like the mayor [Bill de Blasio] and our city, they’re looking for federal funding. And the more they put COVID on the death certificate, the more money they can ask from the federal funds,” he continued.

“So I think it’s political. So, I’m going to turn around and say: ‘You know, like, not everybody that we have here that has COVID on the death certificate died of COVID.’ Can I prove that? No, but that is my suspicion,” he said (video below). 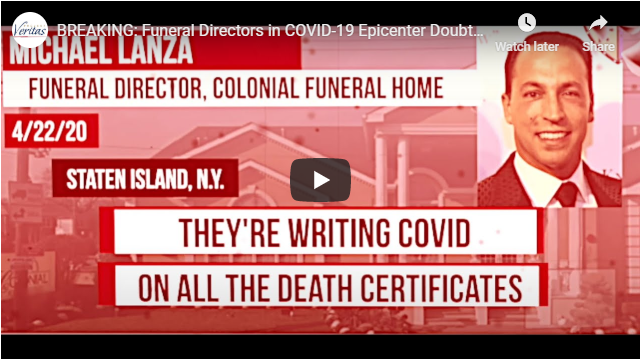 Even more strikingly, Josephine DiMiceli, president of Queens-based funeral service DiMiceli and Sons, told a PV journalist that a Supreme Court justice (state, presumably) was involved in a case in which a non-Wuhan Flu death was categorized as a casualty of the disease.

DiMiceli stated that the sister of a deceased woman called her and said that her sister was afflicted with Alzheimer’s and had not been treated for the Wuhan virus. Furious, the “sister refused to believe that her sister had COVID-19,” DiMiceli reported. “And, like I said, she was the one that said to me … ‘Well, my cousin is, you know, Chief Justice of the Supreme Court. We’re gonna’ get an autopsy.’”

The sister did, and “sure enough, I called her and I said to her that the doctor [who] signed the death certificate did the autopsy — no COVID-19,” DiMiceli continued.

DiMiceli also said that while she wondered who the justice was, she was busy and felt it would be inappropriate to ask a grieving relative for the name.

Then there’s the testimonial of Joseph Antioco, funeral director at Schafer Funeral Home.

“They are putting COVID on a lot of death certificates because people that are going to their hospital [f]or any kind of respiratory distress, respiratory problems, pneumonia, the flu — the flu-like symptoms lead into the COVID-19,” he said. So, you know, it’s hard for them to put their finger on it.”

“To me, all you’re doing is padding the statistics,” he further stated, after a PV journalist interjected. “You’re putting people on that have COVID-19 [even] if they didn’t have it. You’re making the death rate for New York City a lot higher than it should be.”

A lot of people have been dying at home, okay? And the problem is … if you had a private doctor, the medical examiner would speak to the private doctor over the phone, clear it up — bing, bang, it’s all done. But, now, if you don’t have a private doctor, and you are under any medical care, they’re automatically putting down on the death certificate COVID-19 because they don’t want to go — they’re so overwhelmed, A, and B, they’re not going out to houses anymore. They would [previously] go out to the house; they would investigate the scene; they would do testing at the scene, and then come up with the conclusion as to “He had heart disease.” But now they’re putting everything as COVID-19. So they are padding the numbers.

Many in the mainstream media pooh-pooh this PV video (and its other exposés) and claim that stories on inflated Wuhan Flu death numbers are tin-foil-hat conspiracy theories. If so, though, Dr. Deborah Birx, the response coordinator for the White House coronavirus task force, must be part of the conspiracy.

After all, she admitted April 7 that the federal government was counting anyone who died with the Wuhan virus in his system as a casualty of the disease — even though the actual cause of death could have been different (video below) — “despite other nations doing the opposite,” reported the New York Post at the time. 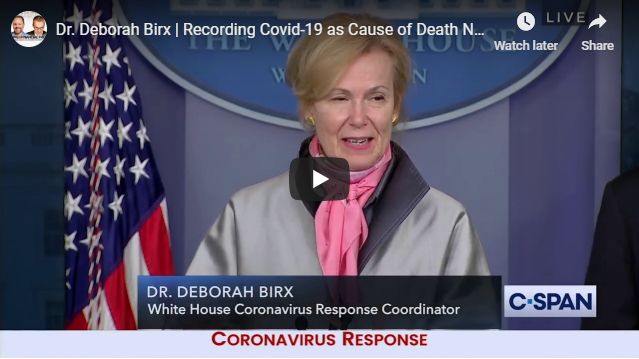 This is all very tragic because the policy-making process is like a computer: garbage in, garbage out. Operating based on bad data yields bad decisions. As to this, our “lockdowns” — which threaten to collapse not only our economy but, possibly, our whole civilization — are justified and perpetuated partially by the Wuhan Flu’s supposed mortality rate.

Selwyn Duke (@SelwynDuke) has written for The New American for more than a decade. He has also written for The Hill, Observer, The American Conservative, WorldNetDaily, American Thinker, and many other print and online publications. In addition, he has contributed to college textbooks published by Gale-Cengage Learning, has appeared on television, and is a frequent guest on radio