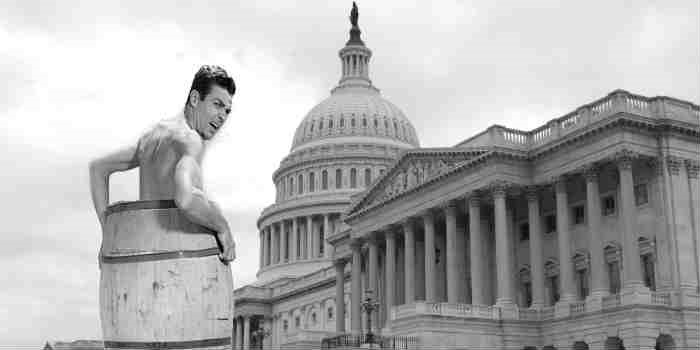 Happily, an overwhelming majority of Americans have both eyes and ears. They are watching. They are listening. They are keenly aware that Democrats are not on America’s side.

After the 2016 presidential election of President Donald J. Trump, I stopped counting the numbers of Republicans and Conservatives who told me how unpleasantly life had changed for them.

Through eight years of President George W. Bush––even through the Reagan years, they said––they could still speak to their friends and relatives and agree to disagree about political issues.

But the reaction to the Trump presidency, they told me, was so extreme, the hysteria so sustained, the venom so poisonous, the rationality so nonexistent, that they couldn’t even go to a happy affair like a birthday party or wedding or dinner at a restaurant without World War III breaking out.

No surprise. While glamorous billionaire businessman and TV star Donald Trump had been lionized for decades before he became president by the very people who are vilifying him today, while office-seeking Democrats held out both hands for his generous contributions to their campaigns, and while leftists like Oprah and the fake-news media whores considered it either a privilege or a scoop to interview him, all that changed when he descended the Trump Tower escalator with his dazzling wife Melania in June of 2015 to announce his candidacy.

Indeed, why did the “tolerant” Progressives display––and exhibit to this very day––such florid and feverish intolerance?

Why did the thug groups of the Left––like Antifa, Black Lives Matter and Occupy Wall St.––step up their violence and downright anarchy in their anti-Trump protests?

Because of the existential threat candidate and now President Trump posed to their hundred-year ambition to destroy the America they loathe––the America that embraces free markets and capitalism, the U.S. Constitution, the Bill of Rights, free speech, the right to bear arms, et al.

To the horror of all those socialist/communist-admiring Progressives, the empire-builder Donald Trump turned out to be a rock-ribbed believer in everything they detest:

Yes, the Progressives had just about succeeded in actualizing their destroy-America goal––eight years of Barack Obama and his socialized medicine (Obamacare), socialized education (Common Core), eviscerating our military, and funding terrorist states like Iran. All they needed was eight more years of Hillary.

I happen to live about 18 minutes from New York City, in one of the meccas of leftwing madness on Long Island. In my suburban community, a Marxist Forum actually exists, voters overwhelmingly cast their ballots for Democrats, including a state legislature that not long ago stood on their feet and applauded a law to allow mothers in labor to end the lives of their fully developed, nine-months-in-utero babies literally one minute before birth. You read that right––applauded!

It’s a community––much like those in far-left California, Oregon, Michigan, et al––that spoon-feeds socialist propaganda to preschoolers straight through high school and college; mandates that students watch Al Gore’s film on the hoax of global-warming, “An Inconvenient Truth”; teaches the Gospel of Victimization for everyone––except those big bad white men and capitalists––and features six-foot posters of the Cuban communist mass murderer Che Guevara in their classrooms. Really.

As it happens, I was raised in a strict and religious home that voted Democrat. After high school, I married, had three children and moved to New York. Having been a truant in high school and then happily having skipped college, my mind was relatively uncontaminated by the leftist sewage that afflicts most people on the East and West coasts.
My education came from real life. For instance, one day I read in our local newspaper that a vote was being held to welcome 75 students from a lower-income neighborhood in Queens to be bussed into our town in order to attend our “superior” schools.

My husband Steve and I voted for this proposal because we had grown up in New Haven, CT, where race relations were harmonious. Our high school’s president was black. I was the co-captain of the cheerleading squad with a beautiful black girl; Steve was a New-England Championship winner on a basketball team with four black guys (they affectionately called him the “light bulb”).

These experiences were so ingrained in our hearts and minds that when we moved into our first home, we hosted the New York Times-sponsored Fresh Air children for three consecutive summers.

But back to the referendum. To the absolute shock of the leftwing powers-that-be, it was resoundingly defeated. Although I was completely apolitical at the time, a neighbor urged me to attend a gathering to protest the vote.

That was when I went to my very first school board meeting. I was about 25 at the time, and my kids were about 7, 5, and 2. At the meeting, the smooth-talking school board president––the wealthy owner of several baby furniture stores––said the following: “The community has spoken. But the community is wrong. We are going ahead to extend the invitation to those students in Jamaica, Queens, in spite of the vote.”

Sitting there, I remember saying to myself: “I don’t think that’s legal!” Silly me, I thought that when you voted for a person or policy, that was the decision of “We the People,” and if you didn’t like the vote, you had to fight harder the next time to get your opinion voted into law.

For me, it was a vivid picture of dictatorial, fascistic, arrogant leftism in living color. And although I didn’t know the language of politics, I knew this species was not for me.

I knew it again when my sanctimonious neighbors told me I should join them in supporting the boycott of lettuce spearheaded by Cesar Chavez in 1970 because he wanted lettuce pickers to have the right to form their own union. Then I found out they sent their children to the supermarket to buy the lettuce!

A few years later, when my youngest child went to kindergarten, I decided to enter nursing school. The same thing that attracted me to conservatism attracted me to nursing: Facts!

I always tell people that if they were my patients, and I was calibrating IVs or drawing medications into a syringe to go into their veins, I would never do these things based on my feelings or instincts or emotions. Why? Because the correct dose could cure you, and the incorrect dose could kill you.

And yet, feelings and instincts and emotions are the three arch criteria on which Progressives base all of their misguided policies––always to the detriment of America!

By the way…the principal of the Jamaica high school in Queens wrote to Mr. Smooth-Talking school board president, saying that he would never let his students attend schools in a community that didn’t want them.

Today, left-right debates have devolved into the children known as leftists resorting to acting-out temper tantrums and vicious name-calling, and the grown-ups known as conservatives usually remain slack-jawed at what they are seeing and hearing.

My own exchanges, however, are usually hilarious––and certainly revealing of the aberrational “thinking” of leftists in general. As an aside, they are always scowling during these exchanges, and I am always smiling…yet another thing that drives them mad.

Progressive: Trump is only lowering taxes for his rich friends.
Me:  I understand….you like high taxes.
Progressive: Well, I’m not saying that….

Progressive: Trump is only quashing regulations to get pro-union votes.
Me:  I understand…you like waiting three years to get a new roof on your home.
Progressive: Well, I’m not saying that…

Progressive: Trump is spending all our money on the military.
Me:  I understand…you like a weak military.
Progressive: Well, I’m not saying that…

Progressive: Trump is a racist for closing our borders.
Me: I understand…you would never get a lock or alarm system on your home.
Progressive: Well, I’m not saying that…

You get the picture. Whether it is Democrat governors or senators or representatives or candidates for office, the rationality factor, the sane factor, the intelligent factor, the pro-American factor is simply missing.

Happily, an overwhelming majority of Americans have both eyes and ears. They are watching. They are listening. They are keenly aware that Democrats are not on America’s side.