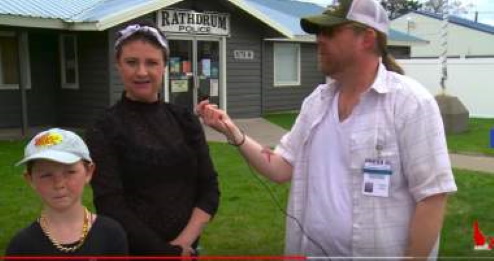 Idaho Governor Brad Little is feeling heat from citizens who are fed up with his stay-at-home executive order that is violating their rights, destroying their livelihoods, and endangering their economic survival.

Christa Thompson (shown) says she had no intention of causing trouble when she started a yard sale to dispose of her late father-in-law’s belongings. “My husband’s father had a very large array of belongings — including from his businesses — in nine storage units that we had to sell or give away because we couldn’t afford to pay nearly $2,000 a month for rent for storage,” Mrs. Thompson told The New American. Peter and Christa Thompson and their six children live in Rathdrum, a small town in the Idaho panhandle. Peter is a truck driver and is usually working several jobs to support the family, she said, so the duty of taking care of Peter’s inheritance — the storage units — fell to her.

The first thing she did was to call the Rathdrum Police Department. “I asked if it would be OK for our family to have a yard sale,” she says. “They told me that would be fine, just make sure everyone observed the six-foot social distancing restrictions.” Peter and Christa began hauling the stored materials from grandpa’s units to their front yard and began a multi-day yard sale. The community response was great, Christa says, and a steady stream of patrons was whittling down the huge stockpile of storage items. (A local news photo of the Thompson yard sale can be seen here.)

Everything was going fine, according to Christa, and people were abiding by the social-distancing rules when officers from the Rathdrum Police Department arrived and told her she would have to take down her yard sale signs. She said she complied and took down the signs. She also complied when officers came back on successive days and ordered her to take down her Craigslist posting for the yard sale, and to have the “excessive” number of people who had parked at the sale move their cars. Subsequently, officers warned her that items that were spilling over the curb onto the street had to be moved back. “We live in a culdesac, not a busy street, and it’s not like our things were blocking traffic,” she told The New American. “It’s typical of what you normally will see at yard sales everywhere. But I moved everything back into compliance with their concerns.”

Rathdrum Police Chief Tomi McLean released a statement on the department’s Facebook page that takes issue with details of the account provided by Christa Thompson. According to Chief McLean, the Thompsons were repeatedly warned “that the yard sale was in violation of the Governor’s stay-at-home-order, and they were admonished not to have the yard sale.”

“A garage sale/yard sale is not an essential business and should not be open for business,” Chief McLean’s release said. Violations of the order are misdemeanors punishable by up to a six-month jail sentence and/or a $1,000 fine.

But what is an “essential business” or “essential activity”? Christa Thompson says that while many, if not most, yard sales are optional events for those putting them on, the Thompson yard sale is essential to the family’s economic survival.  “We have six young children under ten, with my youngest still nursing, and it’s a struggle to pay the bills and put food on the table,” she said. “I don’t understand why golfing is an essential activity but a yard sale is not. The people here at our sale are not any closer or getting exposed any more than when they go to Home Depot or the grocery store.”

“I completely sympathize with anyone who has contracted the coronavirus or who may have loved ones that have died from it, and I don’t in any way want to imply that we are cavalierly disregarding a public danger,” she told The New American. “And I have asked people not to retaliate against the police department. The problem is that orders like the governor’s invite capricious interpretations that end up trampling everyone’s rights, while not accomplishing their stated purpose — which is, supposedly, to protect public health and safety.”

On the day she was issued the citation, Christa Thompson says, she was told by the police she had to pack up all of her yard sale stuff immediately. “I was exhausted and in tears,” she told The New American. “I pleaded with them: ‘My husband’s away working, I’m just one woman, trying to do all of this and take care of my children at the same time. How am I supposed to do that and move all of these things too.’”

Her pleading was to no avail; she was issued the citation anyway. She says she is grateful that an elderly neighbor, who has health issues himself, came forward to assist her is moving many of the items. Fortunately also, a trial attorney in Boise, Edward Dindinger, has agreed to defend the Thompsons pro bono. 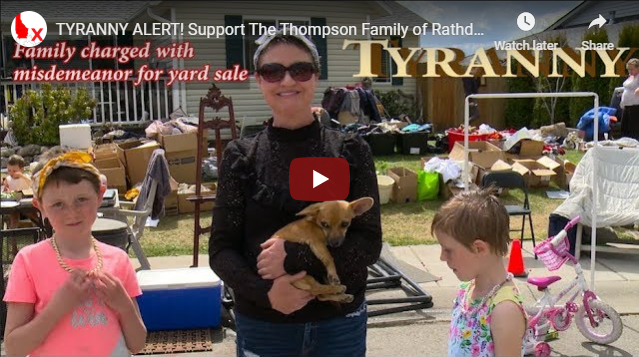 On April 21, homeschooling mom Sara Walton Brady of Meridian, Idaho, was arrested at Meridian’s Kleiner Park for violating the city’s ban on using the park’s playground. A video of the arrest quickly went viral.

The predicament facing the Thompsons, Mrs. Brady, and other Idahoans is a vindication of the warning issued by Idaho Freedom Foundation President Wayne Hoffman in a March 28 commentary titled “Little’s stay-home order is unconstitutional.”

“As COVID-19 reached the U.S., it was easy to compliment Gov. Brad Little for his measured response. Unlike other governors who halted all economic activity within their borders, Little focused on eliminating the government regulations that were in the way of the diagnosis and treatment of coronavirus,” Mr. Hoffman noted.

“But before a single death was logged in Idaho,” he continued, “Little bowed to the opinion of fear-mongering newspaper editorialists, the likes of Rachel Maddow, and the health ‘experts’ who want to protect us to death. Little signed a confusing order this week that forces all Idahoans to stay at home. You can leave, but first you need to decipher about 22 pages of state and federal documents to conclude whether your job or activity is deemed essential or non-essential. Getting it wrong, venturing out of a home or apartment for reasons not deemed valid by the authorities, could result in criminal penalties under state law. This was a sad turn for a governor who made his inaugural year in office all about getting spending under control and cutting government red tape. His efforts have been hailed by many conservatives, who found his approach a refreshing and surprising change from the previous administration.”

The Idaho Freedom Foundation and other conservative, libertarian, and constitutionalist organizations supported a rally in Boise at the state capitol that drew over 1,000 demonstrators on April 17 to protest Governor Little’s shutdown order.

The governor, a Republican, had already received challenges over his shutdown order from within his own party, including from members of the state legislature, the lieutenant governor, a sheriff, mayors, business leaders, and top Republican Party officials. Daryl Wheeler, sheriff of Idaho’s Bonner County, explained in an exclusive video interview with The New American why he had written a letter to Governor Little urging him to reconsider his stay-at-home order, which is having a devastating impact on the economy of Idaho and Bonner County, as well as on citizens’ freedoms, while its health benefits are, at best, very dubious.

Countering the voices of reason that have called for ending the irrational overreaction to the coronavirus “pandemic” are the usual Big Media platforms of the Fake News industrial complex.

The Idaho Statesman, the “newspaper of note” in Boise, called on Governor Little to round up support to drown out the voices that are urging an end to his stay-at-home order. In an April 9 editorial titled “Gov. Little should rally his friends across Idaho to support coronavirus stay-home order,” the Statesman took swipes at the conservative Republicans who have been urging the governor to back off his draconian edicts that are having such a harmful impact on the state.

The newspaper used a comment by an anonymous caller to a town hall meeting sponsored by the AARP (American Association of Retired Persons), reporting her as saying she was “most concerned with those — such as [rancher Ammon] Bundy, state Rep. Heather Scott, and Bonner County Sheriff Daryl Wheeler — who have been openly questioning the stay-at-home order and putting everyone at risk.” The AARP, of course, has been exposed repeatedly as a lobbying arm of the Democratic Party and a reliable proponent of Big Government.

It’s time for Little to use his bully pulpit and surround himself with thousands of his supporters around the state to make clear that the stay-home order is just that: an order. It’s not a suggestion. It’s not a hope or a preference or a request. It’s an order.

Now more than ever, Little needs the support of his lieutenant governor, the speaker of the House, the Senate president pro tem, and legislators from both parties, from north and south, east and west, to stand up in their communities and send the message loud and clear: We stand with the governor’s order to stay home and not put people at risk.

Governor Little harkened to the hectoring of the Statesman and the rest of the media choir, rather than the voices of reason. On April 15, when his first 21-day stay-at-home order expired, Governor Little extended it through the end of April. On April 23, Governor Little issued his four-stage plan for “Reopening Idaho,” with Stage One beginning on May 1. His plan, Idaho Rebounds: Our Path to Prosperity — Guidelines for Opening Up Idaho, states that under Stage One, “places of worship” will be allowed to reopen on May 1, “if they adhere to strict physical distancing, sanitation protocol, and any CDC guidance.”

However, the guidelines further state, “Gatherings, both public and private, should be avoided,” and “Minimize non-essential travel and adhere to CDC guidelines regarding isolation following travel.” Restaurants, bars, nightclubs, hair salons, gyms, and many other businesses and schools remain closed. Visits to senior living facilities also remain prohibited. In Stage Two (May 16-May 29), certain businesses will be allowed to open if they meet “business protocols.”

In Idaho, as in other states, however, the owners of many shuttered businesses are vowing to reopen despite the prospect of fines and possible jail time. Some have already reopened. Several owners, such as the lawyer and gym and bar owners who spoke at the Boise rally, publicly announced their intentions to defy the order. Most others are being more discreet, hoping not to draw attention from authorities that could end in costly citations and legal bills. Several business owners contacted by this writer who have already reopened said they had no choice. For them it comes down to a matter of survival; either reopen for business or go out of business altogether — and join the unemployment and welfare rolls.

Dr. Shiva Exposes Dr. Fauci’s “Fake Science” and the WHO