Is Sweden’s Problem Coronavirus or Immigration? 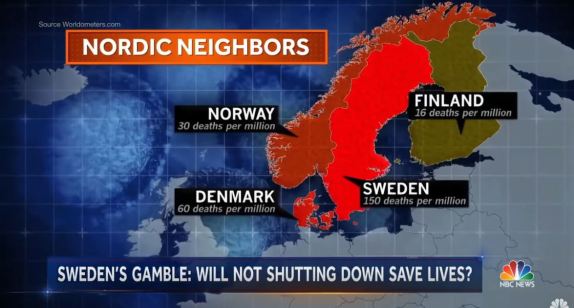 Is Sweden’s Problem Coronavirus or Immigration?

Sweden has been in the news lately because, virtually alone among advanced western nations, it has chosen not to lock down society in the face of the COVID-19 pandemic. Its citizens are largely free to determine how to protect themselves from the virus, at least to a much greater degree than elsewhere. Public appearances are voluntarily down from before, but videos and photographs show the streets and restaurants of Sweden still teeming with activity.

We are told that this has resulted in a high death rate from COVID-19. Is this true? And if it is true, is there another explanation other than the lack of a strict lockdown? I decided to look beyond the scare headlines to find out.

Here is an example of a scare story, slanted with selected statistics to back up its provocative headline: “The Grim Truth About the ‘Swedish Model.’” The author is Hans Bergstrom, a professor of political science at the University of Gothenburg, and he compares Sweden’s COVID-19 deaths per 1 million population with those in the neighboring Nordic countries of Norway, Finland, and Denmark, as well as Germany, which has the lowest death rate of any major European country.

First, he omits the death rates per 1 million residents in other advanced and populous European countries. When we add them, we get a better perspective on how Sweden compares as of April 19:

Expanding this list shows that only Germany among these eight western European countries has a lower death rate than Sweden. Germany is certainly worthy of our attention to determine why it has such a low COVID-19 death rate, but it is purposely biased and misleading to compare Sweden only to Germany among the non-Nordic nations.

Comparing Sweden with Its Nordic Neighbors

There are many political, social, and demographic differences between the Nordic nations and their cousins on the Continent, so it is useful to compare Sweden with its Nordic neighbors of Norway, Denmark, and Finland. (We can omit Iceland since it is so isolated by distance from the European continent.)

When we make this comparison, there is no doubt that Sweden does have more COVID-19 deaths per 1 million population than its Nordic neighbors:

At first glance, that does look pretty “grim” for Sweden, but there are differences in how each nation reports deaths. Johan Norberg, a Swedish scholar working at the Cato Institute in Washington, D.C., explains one big difference:

The truth is that Sweden is somewhere in the European middle when it comes to deaths per capita, which in itself is interesting. We are outliers in terms of policy, but not in terms of outcomes.

There are also reasons to think that Sweden is doing better than these comparisons suggest. Many countries don’t count COVID-19 deaths outside of hospitals. When people die at home, in nursing homes, or in prisons, they don’t show up in the coronavirus death count.

In the Stockholm region of Sweden, 42 percent of deaths took place in nursing homes for the elderly. In many countries, and some U.S. states, those deaths would not show up in the data.

This has a major effect on where you are compared to other countries….

Sweden reports the number of people who die with COVID-19, not of COVID-19. [I explained the importance of this distinction in my Pandemic Report No. 3—Franke.]

Even in a culturally and geographically similar country like Norway—celebrated for its low death rate—they do things differently. The Norwegians only count something as a COVID-19 death if a doctor concludes that someone was killed by the disease and decides to report it to the country’s public health authority.

This means that we have to wait a long time for more detailed data on deaths and specifically excess deaths—those who would not have died from something else close in time—before we proclaim victory or defeat.

Norberg adds that Swedes have not died because of lack of beds or ventilators (its health system has not been overwhelmed), the average age of death has been 81 (close to Sweden’s average life expectancy), and the number of deaths has been in slight decline for more than a week.

And Then There’s the Matter of Immigration

Sweden, ever liberal in its social views, has admitted more refugees and immigrants in the past decade, as a percentage of its total population, than any other nation in Europe. And Sweden is now facing the unpleasant consequences of that policy, both in terms of the coronavirus pandemic and in other measures of social health and welfare.

Even Professor Bergstrom, in the scare article cited at the beginning of this article, admits that “immigrants from Somalia, Iraq, Syria, and Afghanistan are highly overrepresented among COVID-19 deaths.”

And The U.S. Sun reports that Stockholm’s immigrant neighborhoods are “up to three times more affected than the rest of the capital.”

Swedish state epidemiologist Anders Tegnell said on April 7: “Among the Somalis the risk is almost five times higher than compared to people born in Sweden.”

This immigrant factor alone explains much of the difference in COVID-19 deaths between the Nordic nations, since the other nations have not opened the refugee floodgates the way Sweden has. Statistics for the most recent years are not available, but you can see the stark difference in the number of refugees admitted in just the peak year of 2015:

Here are some other pertinent facts about the negative impact of Sweden’s super-liberal immigration and refugee policies, which seem to have been taken with little consideration of how to integrate them into a society that is vastly different from the ones they are fleeing. To avoid the charge that I am relying on anti-immigration groups in the U.S., I have relied on Wikipedia for these examples:

Obviously wide-open immigration from the Middle East and Africa, with little prospect of their integration into their new society, has had a devastating effect on Swedish life. This explains the swing in recent years in public opinion. A poll by Pew Research in 2018 found 52% of Swedes wanted lower immigration, while only 14% wanted increased immigration.

The situation in Sweden reminds us that it is not simply a matter of being “for” immigration or “against” immigration. The question is how to have “smart” immigration—a sensible amount, with the ability to integrate the new residents into their new society.

Bottom line: The verdict is still out on Sweden’s lack of a national lockdown, but the somewhat higher COVID-19 death rates have to be compared to the economic toll imposed by national lockdowns in other European countries. In addition, the devastation caused by Sweden’s super-liberal refugee and immigration policies suggests that those policies are responsible for a substantial part of the COVID-19 deaths in Sweden.

How Big of a Threat Is the Coronavirus? (March 26)

How Bad Has the Pandemic Been? How Bad Will It Be? (April 6)

An Economic Shutdown Based On…What? (April 15)