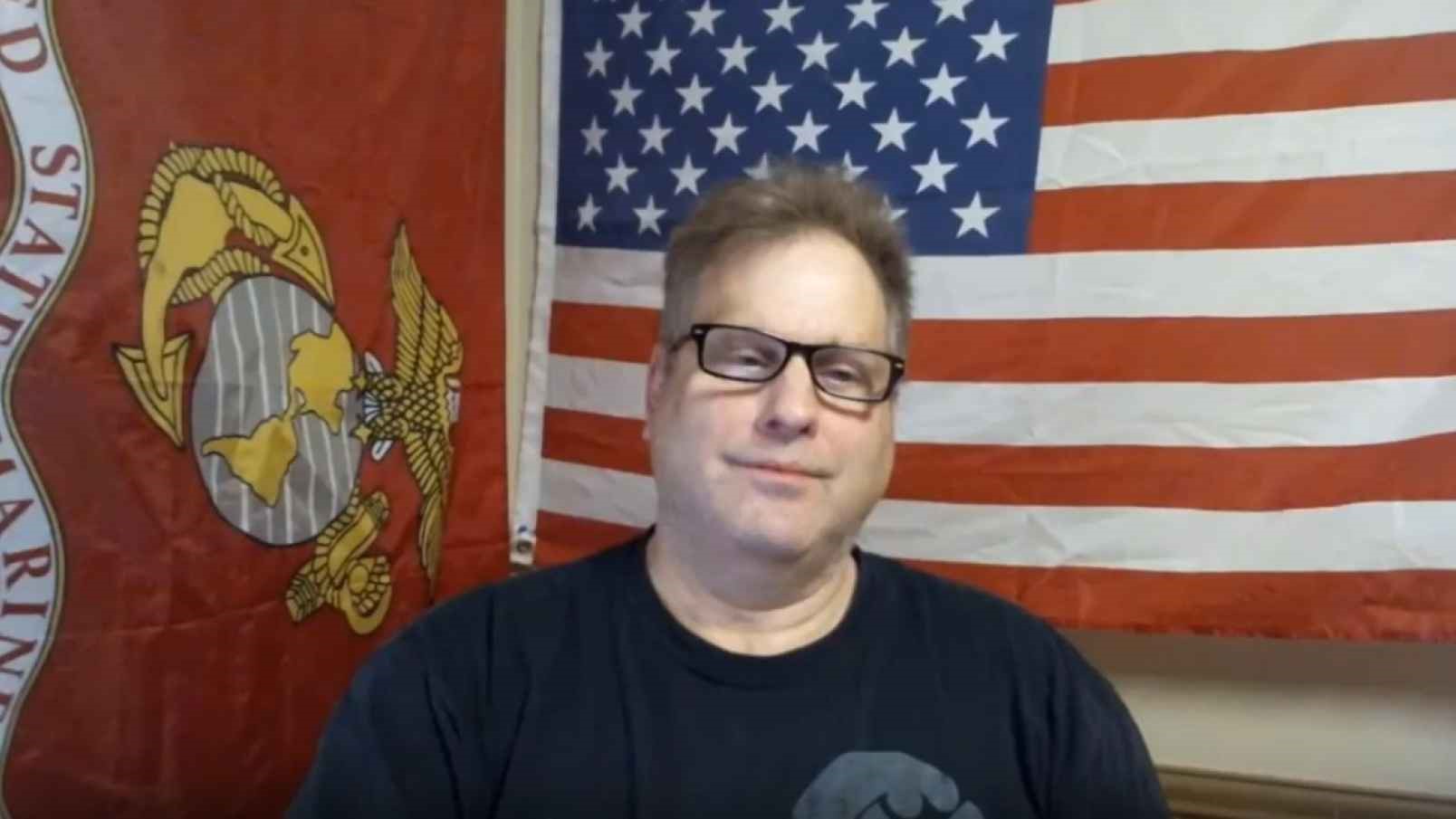 The coronavirus is bad enough, but the real pandemic these days is of cowardice. Nonetheless, even in these days of wokeness, political correctness, and “hate speech,” there are a few public figures with courage. One of them is Rick Phillips (pictured above), a Republican Congressional candidate from Iowa, who has dared to grasp the third rail of American public life and state that Islam is not actually the cuddly religion of peace that every enlightened American assumes it to be at this point.

The Des Moines Register reported Monday that Phillips’ “platform calls for redefining Islam as ‘militant cultural imperialism seeking world domination,’” and that he “drew fire Monday for saying he doesn’t believe Islam is protected under the First Amendment.”

Phillips stated on Quad Cities TV station WHBF that the Founding Fathers had only Christianity in mind when they wrote the First Amendment. “They were not talking about anti-Christian beliefs,” he explained. “Now, if a person doesn’t want to believe in Christ, that’s their business. But to say that this First Amendment right includes all religions in the world, I think, is erroneous.”

The usual reaction ensued, Robert McCaw of the Hamas-linked Council on American-Islamic Relations (CAIR), demanded that both the Iowa Republican Party and the national Republican Party “repudiate these Islamophobic, unconstitutional views.” McCaw thundered: “The Constitution must protect Americans of all faiths. The kind of hatred and anti-American views promoted by Mr. Phillips places in danger both constitutional protections of religious freedoms and the safety of ordinary American Muslims.”

Responding like the good invertebrate that most Republican Party leaders are, Iowa party spokesman Aaron Britt said that Phillips’ statements “are not reflective of the views of the Republican Party of Iowa.”

Lost in all this predictable intimidation on the one hand and equally predictable pusillanimity on the other was the question of whether or not Phillips was right. Surely everyone can agree, or should agree, that the First Amendment is not and was never intended to be a license to commit all manner of crimes if such activity is mandated by one’s religion. No one, Muslim or non-Muslim, should be considered anything but innocent until proven guilty, but sooner or later the United States and all non-Muslim countries is going to have to have a public conversation about how much to tolerate a belief system that is itself radically intolerant, authoritarian, supremacist, and violent.

Can Muslims in the U.S. repudiate those aspects of Islam? Should they? This discussion needs to take place, but right now it is covered over by claims of “Islamophobia.” In the same way, lost in the shuffle also was the question of whether or not Islam really is “militant cultural imperialism seeking world domination.”

Inconveniently for Robert McCaw and his ilk, there are certainly some Muslims who think it is. I could quote violent passages of the Qur’an, but those might be waved away with the dismissive and erroneous claim that the Bible contains similar exhortations to violence. Let’s focus instead on what Islamic authorities say. One might get the impression that Islam is not a religion of peace from the authoritative sources in Sunni Islam, the schools of Sunni jurisprudence (madhahib):

Shafi’i school: A Shafi’i manual of Islamic law that was certified in 1991 by the clerics at Al-Azhar University, one of the leading authorities in the Islamic world, as a reliable guide to Sunni orthodoxy, stipulates about jihad that “the caliph makes war upon Jews, Christians, and Zoroastrians…until they become Muslim or pay the non-Muslim poll tax.” It adds a comment by Sheikh Nuh Ali Salman, a Jordanian expert on Islamic jurisprudence: the caliph wages this war only “provided that he has first invited [Jews, Christians, and Zoroastrians] to enter Islam in faith and practice, and if they will not, then invited them to enter the social order of Islam by paying the non-Muslim poll tax (jizya)…while remaining in their ancestral religions.” (‘Umdat al-Salik, o9.8).

Of course, there is no caliph today, unless one believes the claims of the Islamic State, and hence the oft-repeated claim that ISIS et al are waging jihad illegitimately, as no state authority has authorized their jihad. But they explain their actions in terms of defensive jihad, which needs no state authority to call it, and becomes “obligatory for everyone” (‘Umdat al-Salik, o9.3) if a Muslim land is attacked. The end of the defensive jihad, however, is not peaceful coexistence with non-Muslims as equals: ‘Umdat al-Salik specifies that the warfare against non-Muslims must continue until “the final descent of Jesus.” After that, “nothing but Islam will be accepted from them, for taking the poll tax is only effective until Jesus’ descent” (o9.8).

Hanafi school: A Hanafi manual of Islamic law repeats the same injunctions. It insists that people must be called to embrace Islam before being fought, “because the Prophet so instructed his commanders, directing them to call the infidels to the faith.” It emphasizes that jihad must not be waged for economic gain, but solely for religious reasons: from the call to Islam “the people will hence perceive that they are attacked for the sake of religion, and not for the sake of taking their property, or making slaves of their children, and on this consideration it is possible that they may be induced to agree to the call, in order to save themselves from the troubles of war.”

However, “if the infidels, upon receiving the call, neither consent to it nor agree to pay capitation tax [jizya], it is then incumbent on the Muslims to call upon God for assistance, and to make war upon them, because God is the assistant of those who serve Him, and the destroyer of His enemies, the infidels, and it is necessary to implore His aid upon every occasion; the Prophet, moreover, commands us so to do.” (Al-Hidayah, II.140)

Maliki school: Ibn Khaldun (1332-1406), a pioneering historian and philosopher, was also a Maliki legal theorist. In his renowned Muqaddimah, the first work of historical theory, he notes that “in the Muslim community, the holy war is a religious duty, because of the universalism of the Muslim mission and (the obligation to) convert everybody to Islam either by persuasion or by force.” In Islam, the person in charge of religious affairs is concerned with “power politics,” because Islam is “under obligation to gain power over other nations.”

Hanbali school: The great medieval theorist of what is commonly known today as radical or fundamentalist Islam, Ibn Taymiyya (Taqi al-Din Ahmad Ibn Taymiyya, 1263-1328), was a Hanbali jurist. He directed that “since lawful warfare is essentially jihad and since its aim is that the religion is God’s entirely and God’s word is uppermost, therefore according to all Muslims, those who stand in the way of this aim must be fought.”

This is also taught by modern-day scholars of Islam. Majid Khadduri was an Iraqi scholar of Islamic law of international renown. In his book War and Peace in the Law of Islam, which was published in 1955 and remains one of the most lucid and illuminating works on the subject, Khadduri says this about jihad:

The state which is regarded as the instrument for universalizing a certain religion must perforce be an ever expanding state. The Islamic state, whose principal function was to put God’s law into practice, sought to establish Islam as the dominant reigning ideology over the entire world….The jihad was therefore employed as an instrument for both the universalization of religion and the establishment of an imperial world state. (P. 51)

Imran Ahsan Khan Nyazee, Assistant Professor on the Faculty of Shari’ah and Law of the International Islamic University in Islamabad. In his 1994 book The Methodology of Ijtihad, he quotes the twelfth century Maliki jurist Ibn Rushd: “Muslim jurists agreed that the purpose of fighting with the People of the Book…is one of two things: it is either their conversion to Islam or the payment of jizyah.” Nyazee concludes: “This leaves no doubt that the primary goal of the Muslim community, in the eyes of its jurists, is to spread the word of Allah through jihad, and the option of poll-tax [jizya] is to be exercised only after subjugation” of non-Muslims.

All this makes it clear that there is abundant reason to believe that Islam is indeed a manifestation of militant cultural imperialism seeking world domination. It would be illuminating if Robert McCaw produced some quotations from Muslim authorities they consider “authentic,” and explained why the authorities I’ve quoted above and others like them are inauthentic. But he won’t. And while in reality there is no single Muslim authority who can proclaim what is “authentic” Islam, and thus it would be prudent not to make sweeping statements about what “authentic Islam” actually is, clearly there are many Muslims who believe that authentic Islam is inherently violent and not a Religion of Peace. Are they all hateful “Islamophobes”?

Robert McCaw and Hamas-linked CAIR would prefer we not know that such Islamic scholars and authorities exist. But that is not going to make them go away. Rick Phillips has raised important questions. We owe it to ourselves, and to our nation’s future, not to allow them to be swept under the rug. But they will be.

Robert Spencer is the director of Jihad Watch and a Shillman Fellow at the David Horowitz Freedom Center. He is author of 19 books, including the New York Times bestsellers The Politically Incorrect Guide to Islam (and the Crusades) and The Truth About Muhammad. His latest book is The Palestinian Delusion: The Catastrophic History of the Middle East Peace Process. Follow him on Twitter here. Like him on Facebook here.