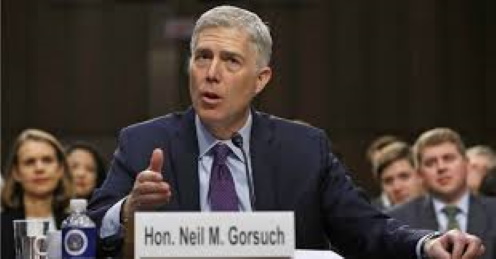 Neil Gorusch struck a stinging blow Monday against the monstrous Roe v. Wade ruling in his majority opinion in a Supreme Court case, Ramos v. Louisiana. The Ramos case dealt with a state law that allows a less than unanimous verdict to convict a defendant of a serious crime (Ramos was convicted on a 10-2 vote).

Evangelisto Ramos was convicted of the stabbing death of Trinece Fedison, whose body was found stuffed in a trash can in New Orleans. Ramos was convicted by a 10-to-2 jury verdict, and was sentenced to life without parole. SCOTUS this week ruled in favor of Ramos, holding that his conviction by a non-unanimous jury did, in fact, violate his constitutional rights.

(I do not see how it’s possible that Ramos’ constitutional rights were violated, since there is no explicit guarantee in the Constitution to unanimous-verdict trials anywhere. Period. How can it be a constitutional right if it’s not in the Constitution? Non-unanimous verdicts were once advocated by the American Law Institute and the American Bar Association. But that’s a conversation for another day. Today’s topic is stare decisis. Stare decisis is Latin for “let it stand,” and is the doctrine that Supreme Court opinions create binding precedent that all future courts must follow.)

Some on the Court, such as Samuel Alito, argued on the basis of stare decisis that the Court should find for Louisiana. The Court had ruled in 1972 that the Sixth Amendment does not guarantee a defendant a unanimous-verdict trial in a state case (as opposed to a federal case).

But Gorsuch argued quite persuasively that the Court needed to decide what was “right” within the 6th Amendment and its history, rather than decide the case on the basis of stare decisis and its prior ruling in Apodaca v. Oregon, an opinion that had been wrong for 58 years. Gorsuch decided that just because the Court was wrong once does not mean the Court has to be wrong until the end of time.

Gorsuch wrote that the Apodaca opinion was “an admittedly mistaken decision, on a constitutional issue, an outlier on the day it was decided, one that’s become lonelier with time.”

He then eviscerated the doctrine of stare decisis. “Even if we accepted the premise that Apodaca established a precedent, no one on the Court today is prepared to say it was rightly decided, and stare decisis isn’t supposed to be the art of methodically ignoring what everyone knows to be true.”

He essentially said, look, we all make mistakes, but that doesn’t mean we have to pretend to ourselves or anyone else that we didn’t. “It is something else entirely to perpetuate something we all know to be wrong only because we fear the consequences of being right.”

Here is an excerpt from my unpublished book, “Everything You’ve Heard About the Constitution Is Wrong:”

When the myth begins to circulate that these misguided precedents are the Constitution, judges themselves can be entirely deceived into thinking that a ruling of theirs is constitutional when all it does is mindlessly repeat the judicially activist error of an earlier court.

The supremacy of the Constitution means in practice that any and all precedents the Court has issued are subject to constitutional review. Precedents do not have, in and of themselves, any constitutional authority whatsoever.

If precedent is binding, why does the Court reverse itself all the time?

Kennedy himself, in a little noticed passage in Lawrence, indicated that precedent is not nearly as binding as people think. He was aware that the Court was overturning its own precedent in Bowers, and this created a huge problem he felt bound to address. He wrote, “The doctrine of stare decisis is essential to the respect accorded to the judgments of the Court and to the stability of the law. It is not, however, an inexorable command. Payne v. Tennessee, 501 U.S. 808, 828 (1991) (“Stare decisis is not an inexorable command; rather, it ‘is a principle of policy and not a mechanical formula of adherence to the latest decision'”) (quoting Helvering v. Hallock, 309 U.S. 106, 119 (1940)).”

There it is, from the pen of one of the most activist judges on planet Earth. Stare decisis is not sacred and inviolate after all. It is not an “inexorable command” nor a “mechanical formula.” In other words, stare decisis can be safely ignored under the right circumstances. One of those right circumstances is when Supreme Court opinions show flagrant disregard for the Constitution. It’s time for some ignoring to begin.

If precedent were binding, slavery would still be legal in the United States

If the doctrine of stare decisis is as sacred and inviolate as legal theorists claim, not only would homosexuality still be a crime and same-sex marriage against the law, slavery would still be legal in the United States.

The Court, in an 1857 opinion written by Chief Justice Roger Taney, ruled in the infamous Dred Scott case that “the negro has no rights which the white man is bound to respect…”

This is precisely what Abraham Lincoln did in the Dred Scott case. He said he would not contest the ruling as it applied to Mr. Scott and his owner, but he flatly refused to accept the premise that the ruling affected anybody else in any way, or established any larger precedent. “This decision,” said Lincoln, “was wanting in any claim to public confidence, and it is not ‘resistance,’ it is not factious, or even disrespectful, to treat it as not having quite established a settled doctrine for the land.”

The state of Wisconsin rejected Dred Scott altogether and refused to acknowledge it or submit to it.

“We think the Dred Scott decision is erroneous,” said Lincoln. “We know the court that made it, has often overruled its own decisions, and we shall do what we can to have it to overrule this.”

So are we to accept Roe as the final word on the sanctity of human life? Absolutely and unequivocally not.

The monster takeaway is that Gorsuch’s majority opinion has gutted Roe v. Wade. The only thing that’s propping up that misbegotten decision is stare decisis. Not even Ruth Bader Ginsburg believes it was rightly decided. Yet it has continued to trundle on, leaving a trail of 63 million butchered babies.

The crying need is to get another abortion case to the Supreme Court and pray God that the Court will once and for all obliterate that rotten-to-the-core opinion for time and eternity.