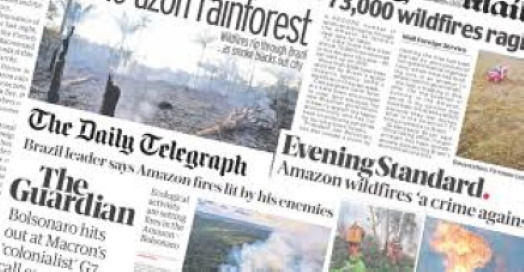 Hundreds of media outlets, including Reuters, are partnering with a project seeking to devote a week of coverage to climate change amid a pandemic that has killed more than 140,00 people worldwide.

The founders behind Covering Climate Now are asking their network of more than 400 media outlets to blanket the airwaves with stories about climate change during the week of Earth Day. Reuters, Bloomberg News, and The Daily Beast are among the biggest names listed as partners of the project.

Covering Climate Now, founded in 2019, announced the event on Feb. 5, before local and state governments began mitigation efforts to halt the spread of the pandemic. One of the project’s founding groups, the Columbia Journalism Review, represents professional journalists and focuses primarily on journalism ethics.

Covering Climate Now’s partners published a deluge of climate-related news in September 2019 ahead of the U.N. Climate Action Summit, held Sept. 15-23. It is now asking its media partners to renew their efforts, moving from discussing climate change to tackling potential solutions.

The latest effort is slated to happen April 19-26 and is soliciting coverage addressing solutions such as putting “a price on carbon” and halting “fossil fuel subsidies, as well as political actions to advance such policies,” Covering Climate Now notes on its event page.

The project’s co-founder, Mark Hertsgaard, has said news outlets should be devoting the same amount of time to climate change as they do COVID-19. The disease, which is caused by the novel coronavirus, originated in China before landing on the shores of the United States, where it has killed more than 25,000 people.

“Stories on other subjects have all but disappeared, and some newsrooms have halted production on non-coronavirus stories altogether,” Hertsgaard wrote in a March 25 blog post contrasting how the news outlets cover climate change with how they treat a pandemic.

Hertsgaard goes on to lament the gap he sees between coverage of coronavirus and climate change.

“While this is understandable given the scope of the COVID-19 threat,” Hertsgaard notes, “it is bizarre that the climate crisis has never been accorded comparable importance, even though it too stands to upend, impoverish, and even end the lives of countless people the world over.”

Hertsgaard has not responded to the Daily Caller News Foundation’s repeated requests for comment about the Covering Climate Now project. He told CJR editor and publisher, Kyle Pope, in September 2019 that the project “has an aroma” of “activism” in the minds of many journalists.

The Washington Post, The New York Times, and The Wall Street Journal have not responded to the DCNF’s request for comment explaining why they are not taking part in Covering Climate Now.

Hertsgaard told Pope that he’s trying to change that perception. There were roughly 200 outlets involved in the partnership last September when Covering Climate Now was requesting reporters blanket news coverage with climate stories. The project has since approximately doubled.

“Partnering with Covering Climate Now to provide access to a selection of Reuter’s new and existing climate coverage free of charge allows other members to make the issue more accessible to their audiences, should they choose,” Reuters spokeswoman Deepal Patadia told The DCNF.

Patadia did not address to what degree Reuters would should be shifting their focus away from the pandemic. Reuters joined the project in December 2019, less than three months after Covering Climate Now’s initial climate coverage kicked off in September of that year.

Bloomberg News, The Daily Beast, and CJR have not responded to requests for comment. Neither Bloomberg nor The Daily Beast have confirmed whether they will participate in the upcoming effort.

BuzzFeed participated in the project’s effort in September but chose not to be involved in next week’s climate coverage initiative, spokesman Matt Mittenthal told the DCNF without providing an explanation. BuzzFeed is still listed among Covering Climate Now’s partners.

Energy analysts and other critics, meanwhile, believe Hertsgaard, Covering Climate Now, and others involved in the project, are disconnected from reality.

“It’s a disconnect with what’s happening in the real world. People are doing the best to flatten the curve, and they’re wringing their hands over climate change,” American Energy Alliance President Tom Pyle told the DCNF. “There is no satisfying these people. It’s an obsession.”

“They want to cover climate change when people are trying to stay alive during a pandemic and keep their jobs or find a new one to provide for their families,” he added.

Pyle said that journalists need to focus their attention on the virus rather than a vague concern about a climate crisis, Pyle noted.

Efforts to mitigate coronavirus have all but left the economy in tatters, with more than 20 million people having filed for unemployment since officials began issuing orders for citizens to shelter in place. Media outlets are focusing the bulk of their resources on reporting out the twists and turns as the virus continues spreading.

Advocacy-style journalism is the new in-thing, according to David Blackmon, an independent consultant and analyst who has nearly 40 years’ experience in the energy industry.

“I don’t think that anyone would object to any of it if they were upfront about their agenda,” he told the DCNF in November 2019, regarding Covering Climate Now’s first effort. “There’s no effort to properly identify agenda-driven pieces.

“They are backed up with factual information, but it usually tells just half the story. It’s become the norm,” he added.

Blackmon, a Forbes contributor, noted that much of the reporting is one-sided and focuses exclusively on one narrative: Climate change must be stopped at any cost. Such reporting rarely gives coverage to the economic consequences of climate activists’ preferred policies, he noted at the time.