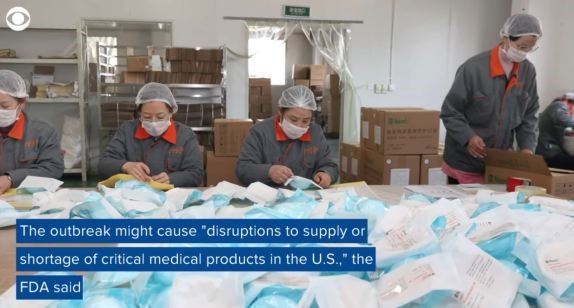 The Wuhan virus epidemic has exposed the truth of something President Trump and other believers in America First policies have been talking about for a long time: Relying on China to manufacture supplies crucial to our wellbeing is very very dangerous.

Back on January 11, 2017, before he was even inaugurated, then-President-elect Donald Trump laid out his ambitions for the US pharma industry. Reversing the trend of the past few years – which was to outsource ever more manufacturing to plants overseas – he called for a return to domestic production.

“We have to get our drug industry coming back,” he said at a press conference. “Our drug industry has been disastrous. They’re leaving left and right. They supply our drugs, but they don’t make them here.”

Trump was right of course, but Congress, more intent on destroying his presidency than helping America, failed to act on legislation that might have helped.

Now, in an effort to begin the process of bringing drug manufacturing back to America Senators Marsha Blackburn (R-Tenn.) and Bob Menendez (D-N.J.) have introduced the Securing America’s Medicine Cabinet (SAM-C) Act to increase American manufacturing of active pharmaceutical ingredients (APIs), the building blocks of prescription drugs. Currently, only 28% of API-producing facilities are in the United States and the number of Chinese facilities has more than doubled since 2010.

According to Pharmaceutical-technology.com, it is hard to gain a handle on the extent of outsourcing, because US trade statistics do not fully reflect the complexity of the global supply chain. Drug products are liable to cross borders at several points during their lifecycle, meaning that even when the drug itself is assembled domestically, around 80% of active ingredients are produced outside the US. Today, the world’s leading supplier of active pharmaceutical ingredients (APIs) is China.

“When confronted with a serious challenge such as the corona virus, it is important to take stock, look at lessons learned and build upon them in order to respond better the next time,” said Senator Blackburn in a statement on her website. “Currently, we are too reliant on foreign manufacturing of critical APIs. The SAM-C Act is one step on the right path to strengthen our drug supply chain.”

Senator Blackburn cited a 2019 report to Congress, by the U.S.-China Economic and Security Review Commission that revealed “serious deficiencies in health and safety standards in China’s pharmaceutical sector.” Dependence upon China and others for prescription drugs combined with safety concerns needs to be addressed. This urgent health event provides an impetus to improve our pharmaceutical supply chain, wrote Blackburn.

The Far Left has already made the major drug companies one of its favorite political punching bags, so putting government funding into pharmaceutical companies is going to be a tough sell to many Democrats.

Many conservatives will have concerns about government intervention in the pharmaceutical marketplace and argue that too much government is one of the things stifling innovation and slowing the speed at which new cures and palliatives can be brought to market.

But at this point, the biggest push back against action to bring drug manufacturing home isn’t coming from politicians – it appears to be coming from some parts of the drug industry itself.

Some analysts have estimated manufacturing cost in the United States are five times that of their Asian competitors. US Industry representatives have disputed whether a return to US manufacturing is compatible with lowering drug prices. Some have suggested that reducing the number of imports might, in fact, hike up costs overall, given that it would mean shifting away from low-cost production sites in Asia.

Then there’s the cost and lead time for constructing the necessary plant and equipment.

After President Trump’s 2017 remarks, Jim Miller reported for PharmaTech.com that between 2012 and 2017 global bio/pharma companies have spent more than $50 billion on new plant and equipment, much of that new capacity was built in tax-favored locations such as Ireland and Singapore, and in emerging markets. Only about a quarter of the projects have been in the US. There just aren’t many US manufacturing facilities that products could be transferred into from offshore. The facilities that are for sale are old and ill-suited for modern products like biologics.

Miller reported it takes nearly four years to design, build, and qualify a greenfield manufacturing facility. Large-scale biologics facilities can cost $1-2 billion. It will take time to make and implement the decisions to build the necessary new capacity.

Lead times for ordering/receiving key equipment such as filling lines for injectables are approximately 18 months these days. It takes at least another year to install and qualify it, said Mr. Miller. So even expanding a current facility is likely to be a three-year proposition, meaning a project started today would not be completed until well into a Trump second term.

President Trump was right and on top of this issue back in 2017, long before the coronavirus hit. Breaking Red China’s stranglehold on America’s life-saving drug supply is a national security and quality of life imperative, but it is going to take two things that the Washington, DC establishment is notoriously bad at – long-term commitment and follow through.