Congress had NO authority to pass the bailout bill 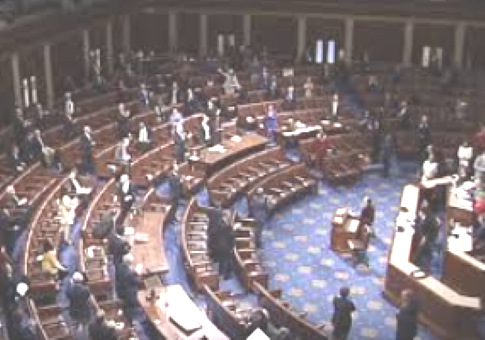 Congress had NO authority to pass the bailout bill

Congress passed a gargantuan, ginormous $2.2 trillion bailout bill last weekend. It was such a cavalier process that Democrats didn’t even bother to come back to D.C. to actually vote on this monstrosity. The bill provided money the government doesn’t have for sunscreen, harbor-dredging, casinos, Big Bird, and performing arts, none of which have anything remotely to do with ending the coronavirus epidemic.

The Kennedy Center took its $25 million boatload of cash and immediately fired all 103 members of the National Symphony Orchestra. So the board will eat, but the string section is on its own.

Obscene and grotesque don’t even come close to describing the reprensible nature of what we witnessed. Congress spent one-half of our annual budget in less than five minutes on a voice vote! To make things worse, the Democrats want to cook up another bill just like it! Or two, or even six!

The only genuine fiscal conservative left in the entire federal government, Rep. Thomas Massie of Kentucky, got lacerated, lampooned, and lambasted for having the cheek to actually believe we shouldn’t spend that much money in the first place, and that we should at least vote on it if we do. There now is a move afoot from the top down to throw him out of the party of Reagan altogether.

What nobody bothered to ask is what constitutional authority Congress had to spend this kind of money on sunscreen to protect Big Bird’s delicate beak. It’s good that nobody asked that question, because the answer is the Congress had not a scintilla of authority to do it – none, nada, zip, zilch.

Dredging harbors, paying for sunscreen, and sending welfare payments to every American are not in there. Anywhere.

There is no authority in the Constitution for Congress to throw money at the objects of their compassion. Congress can provide for the “general welfare,” which means things that benefit every American equally – for example, providing for our national security so that Americans can live their lives in peace without having to fear enemies from without.

James Madison, the “Father of the Constitution,” was in Congress in 1794, while the ink was still dry on the Constitution, and debated against a bill to provide $15,000 in charitable assistance to some French refugees. He said, “I cannot undertake to lay my finger on that article of the Constitution which granted to Congress of expending, on objects of its benevolence, the money of its constituents.” If James Madison couldn’t find it, it’s just not in there.

It’s useless to appeal to the “general welfare” clause. Said Madison, “With respect to the two words ‘general welfare,’ I have always regarded them as qualified by the detail of powers connected with them. To take them in a literal and unlimited sense would be a metamorphosis of the Constitution into a character which there is a host of proofs was not contemplated by its creators.”

Thomas Jefferson agreed. “Congress has not unlimited powers to provide for the general welfare, but only those specifically enumerated.”

Davy Crockett, who gave his last full measure of devotion at The Alamo, debated against a bill to provide charity to the widow of a distinguished naval officer. Said Rep. Crockett,

I have as much respect for the memory of the deceased, and as much sympathy for the suffering of the living, if suffering there be, as any man in this house, but we must not permit our respect for the dead or our sympathy for a part of the living to lead us into an act of injustice to the balance of the living. I will not go into an argument to prove that Congress has no power to appropriate this money as an act of charity. Every member upon this floor knows it. We have the right, as individuals, to give away as much of our own money as we please in charity; but as members of Congress we have no right so to appropriate a dollar of the public money.

As Walter Williams put it, “Charity is not a proper function of government.” When government digs its greedy mitts into the pockets of Americans at the point of a gun only to give it away to other Americans, that’s NOT charity. It’s theft. Just because the government does it, does not make it right. Theft under color of law is still theft.