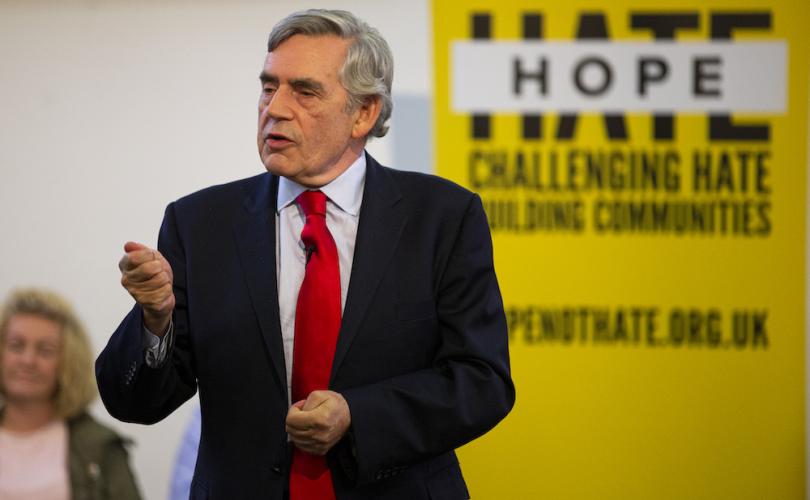 ‘There has to be a coordinated global response…We need some sort of working executive,’ said former PM Gordon Brown.

A former British Prime Minister has called for the creation of a global government to cope with the coronavirus pandemic.

Gordon Brown, who was both Prime Minister and leader of Britain’s left-wing Labour Party from 2007 until 2010, told British media that the world government he proposed would address the medical and financial crises caused by COVID-19. It would direct efforts to find a vaccine for the virus, organize its production and purchase, and stop profiteers. It would also direct the response of the central banks, protect emerging world markets, and “agree a joint approach to the use of government spending to boost growth.”

The Guardian reported that Brown would have liked the U.N. Security Council to have been invited to an emergency online meeting of the G20 countries today. The meeting, hosted by Saudi Arabia, is tackling the issue of the novel coronavirus.

“This is not something that can be dealt with in one country,” Brown said.

“There has to be a coordinated global response.”

During the world-wide financial crisis of 2008, then-Prime Minister Brown convinced “other global leaders of the need to bail out the banks,” the Guardian reported. He then hosted the G20 countries at a summit in London, “which came up with a $1.1 trillion rescue package.”

Contemplating the emerging financial crisis, Brown believes that there should be advocacy for the emerging world markets within the G20 countries through his proposed global taskforce.

“We need some sort of working executive,” he said.

He said also that the World Bank and the International Monetary Fund need, as the Guardian paraphrased, “an increase to their financial firepower to cope with the impact of the [coronavirus] crisis impact on low- and middle-income countries.”

Nigel Farage, the leader of the Brexit Party, and a founding member of the UK Independence Party (UKIP), took issue with the former Labour Prime Minister’s advocacy for a world government.

“Gordon Brown doesn’t get it,” he tweeted this morning. “Globalization is the cause of our problems, not our savior.”

“Gordon Brown does get it,” he tweeted in response. “The One World Government is about sheer power over populaces, not about helping people. They want a world of slaves. He was a key Bilderberg attendee.”

The Bilderberg meetings have been used as a forum for world elites since 1954 to further their vision for the world. Attendees are free to use information from the discussions. No one is allowed to reveal who said what.

Other high-profile individuals who have participated in the Bilderberg meeting include elites such as David Rockefeller, Bill Gates, Bill and Hillary Clinton, Angela Merkel, Tony Blair, Emma Bonino, and Pierre Elliott Trudeau.

According to its own literature, the purpose of the annual Bilderberg Meeting is to “foster dialogue between Europe and North America.”

At the 2009 London Summit for the G20, Brown said, “I think the new world order is emerging, and with it the foundations of a new and progressive era of international cooperation.”