China Uses Coronavirus Panic as Excuse to Crack Down on Churches 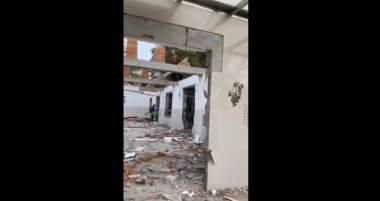 China Uses Coronavirus Panic as Excuse to Crack Down on Churches

Religious freedom watchdogs say the Chinese Communist Party is using the coronavirus outbreak as cover for further persecuting religion, tearing down some churches and using cameras to carefully monitor others.

The Voice of Martyrs (VOM), a non-profit group that helps persecuted Christians throughout the world, reported that Chinese officials have been trampling religious worship during the COVID-19 lockdown.

“China is now holding itself up as a model for fighting the coronavirus,” VOM spokesman Tom Nettleton told Fox News. “But fighting the pandemic hasn’t stopped communist officials from persecuting Christians.”

“Religious persecution continues even in the midst of #WuhanVirus,” Fu captioned the video.

As Christian Post reports, authorities ordered the removal of a cross from a church in Guoyand County, Anhui Province, earlier this month. The removal was captured on video and shared by Chinese Christian Fellowship of Righteousness. A Christian with the surname Chen told China Aid that this church has 40 congregants.

According to International Christian Concern, another church in the Huaishang district of the city of Bengbu, Anhui province, also had its cross taken down by the government. A local Christian named Ms. Yao said the act was led by the local United Front Department, an organ of the Communist Party that oversees religious affairs.

Nettleton told Fox News that officials in Shandong Province have issued rules banning online preaching, which amid the coronavirus outbreak is the primary method by which churches may worship.

We received the guidance from leaders of the supervision departments today: 1. All livestreamed preaching should be stopped immediately! The TSPM & CCC in each city should notify churches promptly and carry it out. 2. Some people still hold fellowship secretly. Please check for them earnestly in each jurisdiction, and the fellowships that meet without approval must be completely eradicated. 3. Take [the Christians’] needs and emotions regarding their faith into consideration. It is necessary to positively guide them to other means with the caveat of not gathering together!

Other churches have reportedly been vandalized by Chinese officials, with orders being given to prohibit “unregistered” religious services because of public-health concerns.

The alleged religious suppression has not been limited to Christians. Buddhists and Taoists also claim that demolition of their temples has accelerated since the coronavirus explosion. Local worshippers say authorities often decide that buildings they themselves approved for construction fail to meet obscure building codes and must therefore be demolished immediately. Congregants have tried appeasing officials by decorating temples with posters of Chinese President Xi Xinping to no success.

“Unconditional cooperation with the government means that no photos of the demolition can be taken, no negotiations initiated, and no compensation demanded. This is typical behavior of the CCP government,” lamented a Buddhist to the human rights website Bitter Winter.

“The Communist Party is as evil as a mafia. Under the tyranny of those modern bandits, even sacred Buddhist temples cannot enjoy peace,” another worshipper said.

Another report by Bitter Winter detailed the use of surveillance cameras to keep tabs on congregations and potentially gather “evidence” of illicit speech that can later be used as justification to wipe out the church in question.

A preacher from Lankao county in Henan’s Kaifeng city said powerful cameras costing more than 10,000 Yuan (roughly $1,400), have been installed in at least eight Three-Self churches. Images from the cameras are displayed on a large screen in the county’s two Chinese Christian Councils. The government is aware of who leads the services, the content of sermons, and even how many congregants are present.

“The surveillance equipment is powerful; it can catch every single word in the church,” said a Three-Self church director. “We can get into trouble for making an incautious remark. Believers don’t dare to even chitchat with each other under such surveillance.” The director claimed he once received a phone call from an official less than an hour after complaining about the government.

Last year, more than 100 cameras were put up in several Three-Self churches in Yi’nan county in Linyi. The Religious Affairs Bureau and United Front Work Department surveil churchgoers with those cameras. Churches that refuse to have the cameras installed are shut down.

Those who attempt to remove cameras are arrested and interrogated and have their church property confiscated. The church and even the personal residence of the preacher are then at risk of being destroyed.

China’s Communist Party reportedly grades churches on a 100-point obedience scale, deducting points for things such as incorrectly displayed Communist flags and slogans. The government has shut down houses of worship whose scores fall below 60.