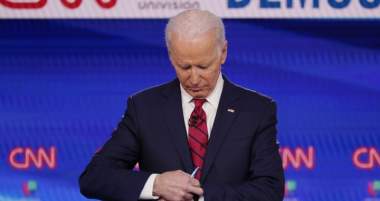 With the near certainty that former vice-president Joe Biden will gain the necessary delegates to become the Democrat’s presidential nominee in 2020, conjecture has begun on who the former Delaware senator might pick as his running mate.

Having already secured 1,201 of the 1,991 delegates needed to clinch the nomination, Biden can turn his attention to more important matters, such as not making the horrid gaffes that he is well known for and picking a suitable candidate who is both deserving of inclusion and beneficial to the Democrat ticket.

Biden promised in his last debate with Bernie Sanders that he would choose a female running mate. He also promised to choose a black woman should he need to appoint a Supreme Court justice.

Now, with the Sanders campaign fading away as surely as winter gives way to spring, rampant speculation is beginning on just whom Biden may choose as VP in his tilt against the windmill that is Donald Trump this November.

So, with half the population disqualified because of their gender, here are some of the most talked-about contenders for the Democrat VP spot:

Kamala Harris
If you believe the oddsmakers in Las Vegas, California senator and former campaign rival Kamala Harris is the early favorite, though by no means a shoe-in, to capture the VP nod. At +135 according to Las Vegas Sports Betting, Harris holds a slight edge in the eyes of the gaming community, at least. One day after Harris bowed out of the race in December, Biden himself said that he harbored no “hard feelings” against his former opponent and even stated that she would be a good VP pick — or a good pick for another important job.

“Senator Harris has the capacity to be anything she wants to be,” Biden said. “I talked to her yesterday. She’s solid. She can be the president herself one day. She can be the vice-president. She can go on to be a Supreme Court justice.”

More importantly, Harris checks off some key boxes for Democrats. In addition to being born with two X chromosomes, Harris is black and has been on the national stage for several years, bringing her own name recognition to the grandest stage in politics.

But Harris comes with some baggage, too. During a June debate, she went after Biden over his record on forced integration and busing. Harris also comes from California, which brings no electoral gains to the conversation as Biden is extremely likely to win far-left California against Trump regardless.

Elizabeth Warren
Since withdrawing from the race earlier this month, Warren has kept her cards close to the vest. The Massachusetts senator, who aligns much closer to Sanders than Biden policy-wise, has not yet thrown her support behind either Biden or Sanders. Perhaps she chose not to endorse either for just this situation — a possible VP selection.

But Warren’s star has fallen, even among her “progressive” base. Many on the far-left feel that Warren has sold out her ideals by not immediately endorsing Sanders after leaving the race. And other being a female, Warren brings no other intersectional credentials unless you count her 1/1,024th Native American heritage.

Warren also finished third in the primary in her own state of Massachusetts. And since that state is reliably Democrat anyway, she brings nothing to the table in electoral terms.

Amy Klobuchar
Minnesota Senator Amy Klobuchar immediately threw her support behind Biden upon withdrawing from the race just prior to Super Tuesday. Considered a moderate in today’s Democrat Party, Klobuchar has tracked closely with Biden on most policy.

As a white woman, Klobuchar brings no other intersectional qualifications to the ticket. She would also not satisfy the far-left “Bernie Bros,” who have threatened to dump the Democrats if Sanders is not picked.

And Klobuchar’s home state of Minnesota, although not as blue as California or Massachusetts, is generally electorally safe for Democrats.

Other Possibilities
One name that comes up often in discussions of possible Biden VP picks is Stacey Abrams of Georgia, who lost the governor’s race to Brian Kemp in 2018 and has never conceded because, in her opinion, the election was not conducted fairly. Abrams blamed voter suppression for her 50,000-vote loss. A darling of the far-left, Abrams, a black woman, could help to deliver Georgia for the Democrats in a general election.

Tulsi Gabbard of Hawaii, who ended her campaign just this week and immediately endorsed Biden, is thought of as a long-shot possibility. Throughout her campaign, Gabbard angered establishment Democrats by calling them “warmongers.” Her immediate endorsement of Biden has angered her far-left supporters. Gabbard strongly supported Sanders in 2016.

Wisconsin Senator Tammy Baldwin, the Senate’s first openly lesbian member, could help to secure Wisconsin, which Democrats lost in 2016. As a lesbian, Baldwin will play well to the LGBT community. However, Baldwin lacks name recognition outside of the Badger State.

And just to keep you from sleeping at night, Hillary Clinton has also been mentioned.

Democrats have made it clear: They want a woman on the ticket.

“I’ve been predicting a woman on the ticket since 2017 and demanding it since Warren dropped out,” said Christine Pelosi, the daughter of House Speaker Nancy Pelosi and a member of the Democratic National Committee. “It’s really important to have the ability to lead America in the depression we will enter if we don’t flatten the curve and find a cure. The best pick is the woman Joe or Bernie trusts the most to be president and commander-in-chief.”

It’s shocking how intersectionality has utterly trumped competence in today’s Democrat Party. While it’s certainly possible that a female could do a perfectly good job as vice-president or president, her gender doesn’t make that any more likely.

Biden has painted himself into a corner with his promise of a female running mate.

James Murphy is a freelance journalist who writes on a variety of subjects, with a primary focus on the ongoing anthropogenic climate-change hoax and cultural issues. He can be reached at jcmurphyABR@mail.com