This Wednesday, Governor Little announced that Idaho is adopting the latest guidance from the White House and U.S Center for Disease Control (CDC) to slow the spread of coronavirus. Currently, Idaho is reporting twenty-three confirmed cases in the following counties: Ada, Blaine, Madison, Teton, Twin Falls, and Kootenai. According to public health officials there is no confirmation of community spread at this time—community spread occurs when people contract the virus from an unknown source in their area.

Governor Little is encouraging Idahoans to do the following through the end of March:

The situation with coronavirus continues to change. Click here to stay updated at www.coronavirus.idaho.gov.

COVID-19, known as Coronavirus, is a respiratory illness that can spread from person to person. The virus that causes COVID-19 is a novel coronavirus that was first identified during an investigation into an outbreak in Wuhan, China. Symptoms include fever, cough, and shortness of breath, and symptoms may appear 2-14 days after exposure.

Celebrating women in Idaho at the Capitol 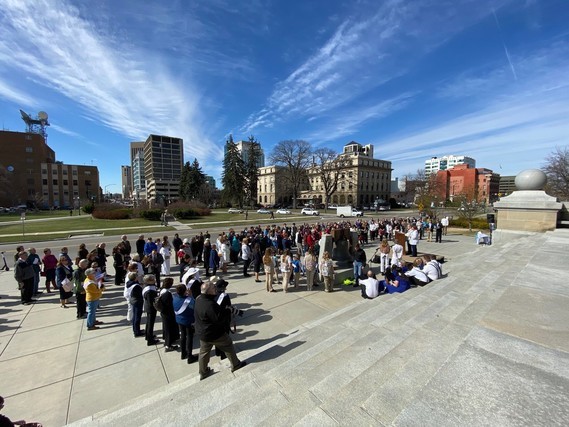 Last Friday, Idahoans gathered at the Capitol for the Women’s Day Celebration. Near the front steps of the Capitol, Governor Little proclaimed March 14th as Idaho Women’s Day as many gathered to celebrate the 100th anniversary of the passing of the Nineteenth Amendment of the U.S. Constitution in 1920. It’s important to note, however, that Idaho made history long before that. In 1896, by Senate Joint Resolution 2, Idaho became the fourth state to give women the right to vote joining the ranks of Wyoming, Utah, and Colorado. This February, the Idaho Legislature passed Senate Concurrent Resolution 118 establishing March 14th as Idaho Women’s Day. 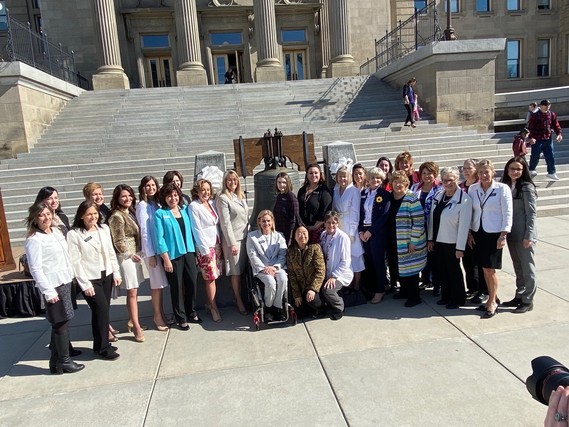 Impact of sugarbeets on the Idaho economy 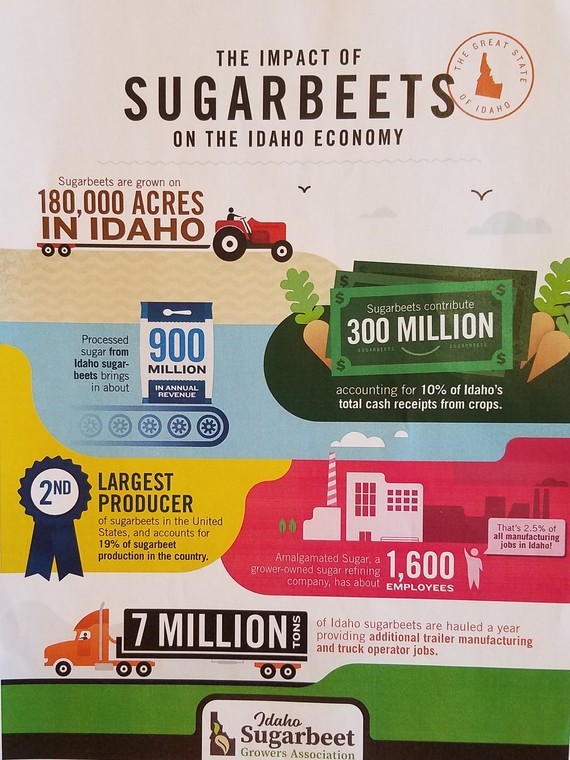 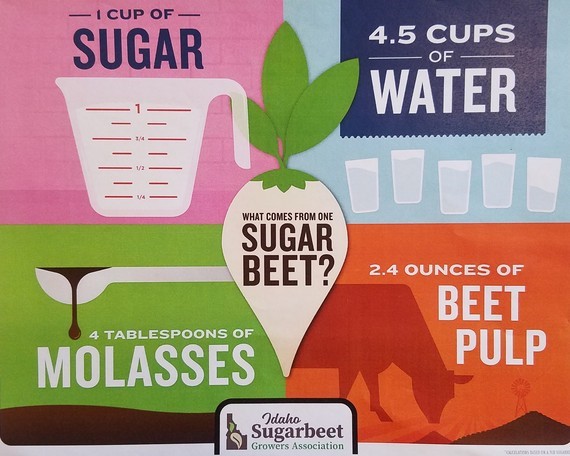 According to the U.S. News & World Report, Idaho ranks fifth in the nation for overall public safety. The Gem State has the sixth lowest violent crime rate and the seventh lowest property crime rate.

According to the U.S. Census Bureau, Idaho has the third highest marriage rate in the nation. The state’s divorce rate dropped to 23rd in 2018 from being the third highest in 2008. Idaho ranks sixth overall in a recent “Happiest States” index by Wallet Hub and World Population Review. Specifically, Idaho ranked first in community and environment and second for work environment. Surprisingly, Idaho has the largest middle class per capita in the United States and the highest growth in middle class jobs. Overall, Idaho ranked second in a “Best States for the Middle Class” according to an index by SmartAsset.com.

Legislation at a glance

The following legislation may be of interest to you. Click here to stay updated on the complete list of bills, resolutions, proclamations, and memorials. Note: These bills are not necessarily law but rather issues the legislature has been working on this session. Click the links to see the status of these bills.

H0345: This legislation amends Section 49-1806 by adding language to disallow booting a car for the sole basis of an expired or improper vehicle registration. This bill passed the House and Senate and was signed by the Governor.

H0523: The purpose of this legislation is to build out the career ladder allocation model and provide additional funding to school districts and charter schools so they can retain their most effective, experienced educators. The amendments in this bill build out the current salary-based apportionment model for instructional staff and pupil service staff over the next five years and adds a mechanism for the Legislature to consider increases after the five-year build out. This legislation passed the House.

H0575: This bill would establish a framework for tastings at state-owned and operated liquor stores. The bill sets limits on servings based on the same requirements currently in place for distilleries. The bill also defines those limits for the purposes of tastings, as well as how the alcohol can be served and who serves it. This bill passed the House and the Senate and is awaiting the Governor’s signature.

H0611: The purpose of this legislation is to ensure uniform laws of tobacco products and electronic cigarettes across the state by preventing local authorities from implementing varying regulations. It would not interfere with or limit any local unit of government from regulating public use or planning and zoning of these products. This bill passed the House, was sent to the Senate Health and Welfare Committee.

H0614: The purpose of this legislation is to treat the use of certain electronic devices behind-the-wheel as an infraction. The bill addresses safety concerns associated with a significant portion of distracted driving crashes. The legislation defines enforcement and retains conditions under which electronic device communications would be allowed. This legislation also addresses the problem of having a growing patchwork of local ordinances. This bill passed the House and resides in the Senate Transportation Committee.

S1237: Current Idaho law limits the permit requirement for hunting stocked upland game birds to state wildlife management areas (WMAs), and identifies the permit required to hunt stocked birds as a WMA Upland Game Bird Permit. This bill expands the permit’s applicability to cover hunting in additional areas with stocked upland game birds as designated by the Commission, and deletes the WMA reference from the name of the permit to reflect this change. The expansion of permit applicability will support stocking at locations in addition to WMAs as circumstance and bird availability allows. The federal Migratory Bird Treaty Act regulates the hunting of tundra swan and other waterfowl and migratory birds. With federal approval, the Idaho Fish and Game Commission may join neighboring states to authorize limited tundra swan hunting. This bill establishes a swan tag and related tag cost. This bill passed the Senate and was sent to the House Resources and Conservation Committee.

S1238: There is broad consensus on the need to help students become more engaged, informed citizens. This bill seeks to do that by expanding opportunities for civics education in Idaho. Current law requires students to pass a civics test before they graduate from high school. This bill expands that law so that a college-credit-bearing exam associated with an advanced civics course, such as the Advanced Placement Government and Politics test can serve as a way of meeting the requirement. The bill also emphasizes the importance of providing high-quality teacher training by targeting professional development dollars for teachers to be trained in civics education instruction. This bill was signed by the Governor.

S1249: This legislation amends the Idaho Code § 49-420 to create a Choose Life license plate by the addition of a new section 49-420R. This will provide a special license plate option for people who wish to proudly express their support of the unborn children. The bill passed the Senate and the House.

S1297: Amends Idaho Code by adding a new Section 49-420R to be designated as the “Too Great For Hate” specialty license plate. This bill passed the Senate by 28-7-0 on February 24th and is on the House Third Reading Calendar.

S1309: This proposed legislation will revise provisions within the existing elections statutes (Title 34) pertaining to absentee ballots. This is necessary to ensure that the greatest possible opportunity to exercise the right to vote is available to a qualified elector who experiences an emergency situation that requires hospitalization immediately preceding an election. This proposed legislation includes an emergency clause, as it could be applied to those elections occurring this year prior to June 1, specifically the presidential and/or statewide primaries in March and May respectively, upon passage. This bill passed the Senate and was sent to the House State Affairs Committee. This bill has passed the Senate and House and is awaiting the Governor’s signature.

S1333: This legislation will regulate all beer products regardless of alcohol content to make regulation of beer more straightforward. This legislation will also change the standard of measurement from alcohol by weight to alcohol by volume to align Idaho law with Federal laws and the widely accepted industry standard of measurement. Over the course of three years, 5% of revenues derived from “strong beer” will be reallocated from the Idaho Grape Growers and Wine Producers Commission to the General Fund resulting in an increase to the General Fund. Regulation of beer, including legal limits of alcohol content and tax rates will remain the same as written in current law. This legislation is awaiting a hearing in the Senate State Affairs Committee.

S1385: This bill becomes effective when the United States Supreme Court restores to the states their authority to prohibit abortion, or the United States Constitution is amended to restore to the states their authority to prohibit abortion. Upon the occurrence of these prerequisites, this statute makes the performance of an abortion a crime. It provides affirmative defenses in the cases where the life of the mother is an issue and cases of rape and incest. Passed in the Senate and filed on the Third Reading Calendar in the House. This bill passed the Senate and House and is on the Governor’s desk.

S1428: This is an FY 2020 supplemental appropriation requested by the Governor for the Division of Human Resources. The bill provides $500,000 for advanced sick leave and paid administrative leave to cover expenses related to the coronavirus pandemic. Passed in both the House and Senate.

SCR118: The purpose of this Concurrent Resolution is to establish March 14 as a day of recognition to be celebrated in perpetuity for Idaho Women. This concurrent resolution seeks to recognize and celebrate all the contributions that Idaho women have made and will continue to make in Idaho and across the country. The Concurrent Resolution was adopted by both the House and the Senate and delivered to the Secretary of State.