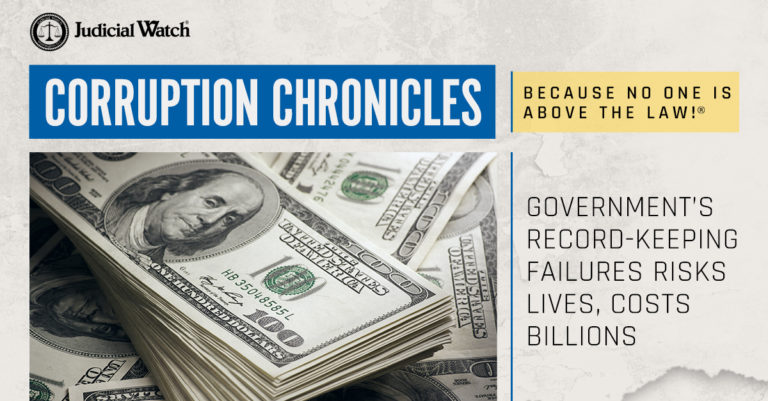 The U.S. government’s failure to properly keep records not only compromises accountability and transparency, it has cost American taxpayers billions of dollars and in some cases their lives. A whistleblower and former federal contractor with firsthand knowledge of the matter told Judicial Watch that the epidemic of poor records management across all federal agencies constitutes the biggest government accountability and transparency scandal of our lifetime. His name is Don Lueders, a computer software engineer who spent 20 years at several top software companies developing costly applications to help the government properly manage records.

However, billions of dollars in records management applications that could help solve the problem have never been used and the crisis continues. Government agencies purchase the programs, Lueders says, but never actually utilizes them. “The government buys software because it gives the impression that they’re doing records management,” Lueders told Judicial Watch during a recent interview. “But they don’t use it.” He refers to the government’s longtime record-keeping system as “information chaos” that requires a congressional investigation.

Many of the government’s record management failures have been exposed by Judicial Watch in cases that involve key federal agencies, including the Internal Revenue Service (IRS), State Department, Federal Bureau of Investigation (FBI) and Department of Justice (DOJ), among others. In fact, a recent news article on Uncle Sam’s widespread records management deficiencies mentions two cases that Judicial Watch litigated. One involves a scandal in which the Obama IRS selectively audited conservative groups that opposed the administration’s policies. The other involves Hillary Clinton’s now famous illegal use of a private email server while she was Obama’s Secretary of State.

For years Judicial Watch’s work has helped uncover the underlying problems associated with the government’s dreadful record-keeping system, which is incredibly handy in cover-ups. Many of the cases required a dragged-out litigious process to obtain records that should be readily available under the Freedom of Information Act (FOIA). A recent example involves the unsecure server Clinton used to transmit classified information as the president’s chief foreign affairs adviser. Judicial Watch has been embroiled in a years-long legal battle with the government for the records and just a few weeks ago, more than a dozen new Clinton emails not previously produced as per a federal court order magically appeared. A DOJ attorney could not explain to a federal judge how the FBI suddenly found the new stash of Clinton emails, which were originally to be provided by the State Department.

Some record-keeping failures have more serious consequences as the story mentioned earlier points out. For instance, the man who shot and killed more than two dozen people at a Texas church a few years ago used guns he would not have been able to buy if the Air Force had managed its records efficiently. “On six occasions, military officials failed to send Devin Kelley’s records to the FBI while the Air Force investigated, court-martialed, and imprisoned him for abusing his wife and stepson,” the article states. “Had the FBI received the records, the killer would have been barred from buying the weapons used in the massacre.” Similar records management failures have also received widespread media attention. Remember that in 2015 an astounding 21.5 million records were stolen from the Office of Personnel Management (OPM), the federal government’s chief human resources agency and personnel policy manager.

This is not a partisan issue, but rather a pervasive government wide emergency that Lueders says has been going on for almost a quarter century regardless of who occupies the White House. “We’re wasting billions and people are dying,” he said, stressing that democracy can’t exist without accountability and transparency.