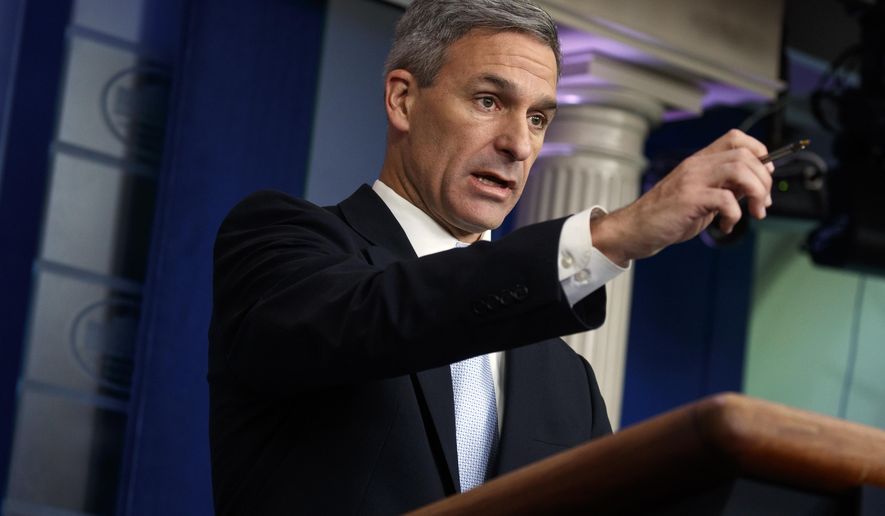 Conservatives have been trying for decades to create an immigration system that rewards immigrants who won’t be a burden on society and discourages those who will.

The Trump administration this week began enforcing the “public charge” rule, giving U.S. Citizenship and Immigration Services the authority to refuse green cards — the key step on the path to citizenship — to people who have used a wide range of nonemergency welfare programs.

“The main reason this got done is because we have a president who is determined enough to make self-sufficiency matter again in a meaningful way,” said Ken Cuccinelli, who pushed through the rule as acting chief of USCIS and is now acting deputy secretary at the Department of Homeland Security. “That kind of entrepreneurial mentality is a natural for him.”

Like most of President Trump’s other immigration moves, this one has survived an onslaught of court challenges, howls of complaints from Democrats on Capitol Hill and fierce opposition of immigration rights groups, who called it racist and elitist.

The administration said the vision of self-sufficient immigrants has been part of the American vision since Colonial times and was explicitly written into law in 1882, when Congress banned any immigrant who was “unable to take care of himself or herself without becoming a public charge.”

The idea was reaffirmed as recently as 1996, when President Clinton signed legislation giving officers explicit powers to deny visas to potential public charges.

Yet the Clinton administration issued guidance that took much of the teeth out of the law, saying only a few cash-benefit programs such as welfare checks would be considered.

Critics said that left immigrants free to collect food stamps, Medicaid and other “noncash” benefits and had long pressed for action.

The Trump rules expand the calculation to include noncash programs such as food stamps, housing assistance and Medicaid. Anyone who used those benefits for at least 12 months out of a three-year period would be flagged.

It’s not an automatic disqualifier, but it will be “an important factor, heavily weighted to the negative” when USCIS officers decide whether to grant a green card, Mr. Cuccinelli said.

The State Department said it will begin following the same rules for those applying for entry from outside the U.S.

Homeland Security won’t guess how many people may be denied under the rule, though Mr. Cuccinelli said the bigger change will be in immigrants’ behavior.

He predicted some rejections in the short term as people apply after taking welfare. Over the long run, he said, they will adjust their behavior and decline to take benefits if it isn’t absolutely necessary, “which is actually a useful measure, at the margin, of who’s able to be self-sufficient.”

“The goal is to make sure that people who are granted long-term status, legal permanent residence status, can stand on their own two feet. And get back to that American tradition that has been in law for over 140 years,” Mr. Cuccinelli said.

The rules don’t apply to refugees, asylum-seekers and those in the U.S. on special victim visas.

Applications filed before Monday will be judged under the old rules.

Critics of the new policy include immigrant rights groups and the American Psychological Association, which weighed in last month with a statement declaring that the change will “negatively affect the physical and mental health of those immigrants who are most in need.”

“It would effectively bar many of them from life-sustaining and potentially life-saving programs under the threat of losing a path to citizenship and potential deportation, leading to more immigrant family separations,” said Sandra L. Shullman, president of the APA.

“Those guys are crazy,” said Mr. Cuccinelli, adding that it’s not incumbent on the government to make sure nobody faces stressful choices.

Some immigration rights groups predicted that those who are rejected will be deported.

Federal law does allow for deportation, but Homeland Security says the new rule applies only to admissibility. Those whose applications are rejected will remain in their current status.

Immigrant rights activists do say they have seen a drop in the number of people asking for benefits — even those who wouldn’t be affected by the changes. Some activists compared the rule to the travel ban, saying it’s another way for the Trump administration to shape the flow of migrants.

“The rule would reshape the immigrant demographics to become both richer and whiter,” said Carlos Guevara, associate director for immigration policy at UnidosUS.

The rule was finalized last summer and was supposed to take effect in October, but it was met with a flurry of lawsuits like much of the Trump immigration agenda.

Five federal judges — all appointed by Democratic presidents — issued rulings against the policy. But several appeals courts, and later the Supreme Court, stepped in and ruled that the policy could take effect while the case is being fought.

The final ruling was issued last week when the high court, in a 5-4 decision, stayed an injunction by a Chicago-area federal court.

Justice Sonia Sotomayor, who opposed the stay, unloaded on her Republican-appointed colleagues, saying they have created a “breakdown” in the appeals process by being too quick to agree with the Trump administration.

“The court’s recent behavior on stay applications has benefited one litigant over all others,” she wrote.

The decision is part of a string of Supreme Court victories after a series of lower-court losses on issues including border wall construction and the president’s travel ban.

Mr. Cuccinelli said that is affirmation of Mr. Trump’s approach.

“We’re not trying to push envelopes, like they did in the Obama administration,” he said.

The high court’s intervention strongly signals that the justices will side with Mr. Trump when the cases reach their doorstep in full.

But Mr. Cuccinelli said USCIS will be able to tell which applications were affected by the public charge rule, should the justices need to revisit them.