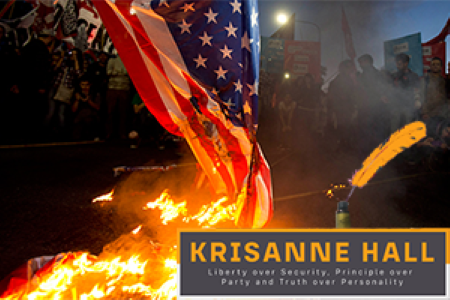 The flag represents “the Republic for which it stands.”  That Republic is the foundation for maintaining our Union of States.  The purpose for creating and maintaining the Union of States is to “secure the Blessings of Liberty, to ourselves and our Posterity.”  The first principles of that Liberty are codified in the First Amendment of the Bill of Rights.  How is it that so many people are more attached to the flag than those inalienable, God given Rights that we are supposed to be defending?  How can we make it illegal to burn a flag, and sit back, day after day, as our own representatives tear through our Liberty like a whale through a net?  I know from public polls and personal experience that less than 2% of Americans can name all five Liberties in the First Amendment, from memory, without looking for the answer.  How can some Americans become more attached to a flag than the Liberty that America was created to protect?  Perhaps it is because Americans, as a whole, have become so ignorant of their Rights that many will desperately cling to symbols instead of standing for our Liberty.

Not too long ago many were shouting that mantra at the liberals and the LGBT, declaring it “un-American” to censor people they deemed “offensive.” How quickly the terms of Liberty are forgotten and how fickle people become when they are now offended.

“This sacred Privilege is so essential to free Governments, that the Security of Property, and the Freedom of Speech always go together; and in those wretched Countries where a Man cannot call his Tongue his own, he can scarce call any Thing else his own. Whoever would overthrow the Liberty of a Nation, must begin by subduing the Freeness of Speech; a Thing terrible to Publick Traytors.” Silence Dogood #8

There is another issue of property.  If you own the flag it is your property to burn.  The federal government made the burning of money illegal, because they say that the paper money is federal property.  Are we saying that every flag we buy is still owned by the government so they can prosecute us for burning their property?  What if I take a bed sheet and draw a US Flag on it and burn it, will I go to jail or have my citizenship revoked for that, too?  Who defines this offense?  Who punishes this offense?  It will be those in government who have proven themselves ignorant and irresponsible to Liberty; those in government who wrap themselves in that flag and then torch our Bill of Rights.  That is a power we ought not allow government to exercise, it is one they have proven they do not deserve to wield.

Those in government who are ignorant of Liberty and those in government disposed to usurp are not going to overturn the Right to Free Speech by amending the Constitution, but what they will do is create laws attacking specific aspects of Free Speech or engage in efforts of societal censorship (political correctness) and make us censor ourselves. Self-censorship is the greatest form of servitude because the slaves never see the chains that bind them.

We must KNOW that speech cannot be censored by government, and the people should not be afraid to speak!

“For no People will tamely surrender their Liberties, nor can any be easily subdued, when Knowledge is diffused and Virtue is preserved. On the Contrary, when People are universally ignorant, and debauched in their Manners, they will sink under their own Weight without the Aid of foreign Invaders.” Samuel Adams 1775

The founders of our Constitutional Republic burned their flag, they burned effigies of their politicians and tax collectors, too.   They burned their flag as an expression of sadness over their Liberty lost through government usurpation.   They burned their flag as an expression of disgust over the despotic attack by their government upon their Liberties.  Their flag meant no less to them than our flag means to many Americans.  They loved their country of Great Britain.  They continually prayed for reconciliation with their country, up to and even beyond the Declaration of Independence.  To them, burning their flag, was the most powerful way to express the utter despair they felt over their government’s refusal to recognize the Rights of all Englishman as guaranteed by their Constitution and by God.  To them, burning effigies of their tax collectors and politicians, was the most peaceful way to show their complete disgust for the negligence and criminality of those they had entrusted as guardians of their Rights.

As a matter of fact, the colonists did something “worse” than burning the Union Jack, they created a whole new flag as a statement of their defiance and independence!  Therefore, it is not even historically accurate to claim that our founders would not advocate burning the flag in protest.  They personally knew that power of that free expression.

We must get our priorities in line.  We must develop a fonder attachment to Liberty than to paper and cloth.  Without that Liberty, the only paper and cloth you will possess are the ones that our government gives you permission to possess and you will only possess it under their terms and conditions.  Let us Love Liberty over Security and Comfort, Principles over Parties, and Truth over Personality.

“Let us remember that “if we suffer tamely a lawless attack upon our liberty, we encourage it, and involve others in our doom.” It is a very serious consideration, which should deeply impress our minds, that millions yet unborn may be the miserable sharers of the event.” Samuel Adams 1771

“Necessity is the plea for every infringement of human freedom. It is the argument of tyrants; it is the creed of slaves.”  William Pitt, the Younger

Perhaps if we had spent more time in school memorizing the Bill of Rights than the Pledge of Allegiance, we would be having a different conversation.