Foreign Aid, Usurpation and Treachery: A Real Case for Impeachment 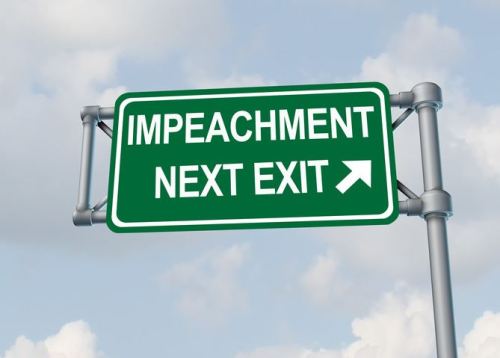 Foreign Aid, Usurpation and Treachery: A Real Case for Impeachment

Though conservatives cheered the recent acquittal of Donald Trump on charges of abuse of power and obstruction of Congress, treating him as now fully vindicated of any wrongdoing, we should understand that the President actually did commit what should be deemed an impeachable offense. The President participated, together with Congress, in a usurpation of power not granted to the federal government under the U.S. Constitution, thereby violating his oath to “preserve, protect and defend the Constitution of the United States,” and committing an act of treachery, a “violation of allegiance.” Of course Congress itself stands equally indicted.

Therefore, for Congress to legislate, tax, or spend in any area or manner not clearly authorized to it in the plain text of the U.S. Constitution, and for the President to administer such acts of Congress, or attempt to exercise other powers not specifically granted to him in the Constitution, is usurpation, “The act of seizing or occupying and enjoying the property of another, without right.” In this case, it is the seizing of power that is the property of “we the people” which we did not delegate to Congress or the President and which is therefore “reserved to the states respectively, or to the people.”

Such is the nature of all so-called “foreign aid,” the matter that lays at the foundation of the recent impeachment affair. Nowhere in Article 1, Section 8, nor elsewhere in the U.S. Constitution, is Congress delegated authority, or the President granted special executive power, to distribute the wealth of U.S. taxpayers to foreign governments except in payment of debts or as a condition of a treaty. Yes, all foreign aid, though found in every federal budget, is a usurpation of power not granted to Congress or the President by we the people. Therefore, foreign aid, in and of itself, is an act of treachery that violates the allegiance that our elected officials swore to our Constitution.

Ironically, and quite hypocritically, Democrats in Congress who violated their oath of fidelity to the Constitution by providing foreign aid to Ukraine in the first place, later claimed to be defending the Constitution when they impeached President Trump for temporarily aligning with the Constitution when he withheld the unlawfully procured funds. I realize the impeachment was really about the President trying to get Ukraine to investigate corruption that may have led to exposing wrongdoing by Joe Biden, a potential Presidential campaign opponent to Mr. Trump, but at the root of the whole affair was the unlawful redistribution of U.S. taxpayer dollars to a foreign power.

Meanwhile, the conservative right, who claim the perennial title of Champions of the Constitution, hailed the President’s acquittal, treating him as exonerated of all wrongdoing, even though he quite clearly did participate in usurping power not granted to the federal government when he ultimately disbursed the foreign aid funds to Ukraine.

The political right may want to defend the President as only having done what everyone else does (though that doesn’t make it right), or point out that he is now proposing a budget that would reduce the amount of U.S. taxpayer dollars unlawfully sent abroad. Nevertheless, conservatives passed up an opportunity to confront the public consciousness with a Constitutional lesson by exposing the fact that the very foreign aid at the root of the whole impeachment affair was itself unconstitutional and that therefore, both parties in Congress and the President stand equally indicted of usurpation.

The right’s celebration of the acquittal of the President sends the wrong message. It turns a blind eye to the unconstitutional nature of the foreign aid that was at the center of the controversy and effectively says to the public that conservatives are okay with the treachery of such usurpation so long as the right people are doing it. This too is hypocritical.

It’s worth keeping in mind that this is not just about Ukraine. The U.S. distributes approximately $50 billion per year in foreign aid to 168 countries with 28 percent of the funds going to military aid. In other words, the wealth extracted from American families at the barrel of the IRS gun does not all end up in the pockets of foreigners. Over a quarter of the funds make the round trip back to the U.S. where they end up in the coffers of the corporations comprising America’s military-industrial complex. But either way, it is a forced redistribution of wealth that is inherently immoral and Constitutionally unlawful.

I realize that in the grand scheme of things foreign aid is a small matter, at least as compared to the overall budget and other affairs of government. However, small matters pave the way for greater ones and small encroachments of government left unchecked pave the way for greater and greater usurpation until, as today, the majority of what our federal government does is done by usurpation of powers not delegated to it under the Constitution.

Both parties stand guilty of usurpation. Never mind the degree of guilt or dollar amount associated with it. The bottom line is that a majority of the members of both parties in Congress have treacherously abandoned their oath of allegiance to the Constitution. And does it really matter whether they have done so knowingly and willfully with malicious intent, or because they are too ignorant and reckless to read and understand the plain text of the document they swore an oath to uphold, or because they simply lack the character necessary to keep their commitment? Any of these leave we the people just as violated by those who swore an oath of allegiance to the contract that we made with our government.

The real crime in America is not the indiscretions the President may have committed, nor the hypocrisy of those who sought to remove him from office for momentarily being aligned with the Constitution when he withheld the aid. The real crime is that we the people continually return to office politicians of both parties who stand impeached of usurpation, and thereby, treachery. It is the duty of we the people to remove such from office and replace them with others possessing a clear understanding of the plain text and original intent of the U.S. Constitution and the character necessary to abide by its strictures.

And if the political parties and powers that be fail to provide us with such candidates for office, then, to paraphrase the Founders sentiments in the Declaration of Independence, it becomes the duty of we the people to alter or to abolish those parties, and to institute new political associations, laying their foundation on such principles as seem most likely to affect our Safety and Happiness.

And if we cannot find men to raise up as candidates for public office who possess the necessary understanding and integrity to restore Constitutional governance, then it is the church that has failed to produce spiritually mature men of character and it has become the duty of Christians to repent for the deplorable condition we have allowed ourselves to lapse into and to humble ourselves and return to seeking the Lord’s face in the hope that He might correct and restore His church so it can be an instrument of blessing to the land.

And if we the people, particularly Christians, conservatives, and the right, fail to do the foregoing, then it will be ourselves who have failed, having abandoned our allegiance to the American ideal and forsaken fidelity to the spirit of the American founders. It will be we who are found to be the traitors to our own professed values.

A people that elect corrupt politicians… are not victims, but accomplices. – George Orwell