Meet Flippy the Burger Chef, Who Never Sleeps or Goes Home — and Makes $3 an Hour 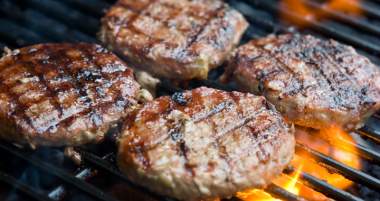 Meet Flippy the Burger Chef, Who Never Sleeps or Goes Home — and Makes $3 an Hour

A new Karl Marx can come along shouting “Workers of the world, unite!” but Flippy the burger chef will hear none of it. An employee even illegal aliens can’t compete with, he does his job dutifully, never goes home, doesn’t get sick or take bathroom breaks and won’t unionize — and can be had for $3 an hour. And if you have a beef with his undercutting you, he doesn’t care. Flippy, you see, is a robot.

As the Los Angeles Times tells us via reportage not yet artificial-intelligence (AI) generated:

In a test kitchen in a corner building in downtown Pasadena, Flippy the robot grabbed a fryer basket full of chicken fingers, plunged it into hot oil — its sensors told it exactly how hot — then lifted, drained and dumped maximally tender tenders into a waiting hopper.

A few feet away, another Flippy eyed a beef patty sizzling on a griddle. With its camera eyes feeding pixels to a machine vision brain, it waited until the beef hit the right shade of brown, then smoothly slipped its spatula hand under the burger and plopped it onto a tray.

The product of decades of research in robotics and machine learning, Flippy represents a synthesis of motors, sensors, chips and processing power that wasn’t possible until recently.

Now, Flippy’s success — and the success of the company that built it, Miso Robotics — depends on simple math and a controversial hypothesis of how robots can transform the service economy. Costing less to employ than a minimum-wage worker, Flippy is built to slip in right alongside humans on the fast-food line.

Flippy has already gone beyond testing, too, with his early versions having “put in time on the line at Dodger Stadium and at locations of CaliBurger, a small quick-serve chain that [Miso chief executive Buck] Jordan says also functions as ‘a restaurant tech incubator masquerading as a burger joint,’” the Times further reports. “(Cali Group, CaliBurger’s parent company, is the parent company of Miso Robotics as well as two other restaurant industry start-ups.)”

Jordan believes that Flippy could appear widely in fast-food kitchens as early as next year, a potentiality made possible by rapidly declining hardware costs. Robot arms, for example, have plummeted from $100,000 to just $10,000 during the last four years, and the cost is poised to drop even further.

Consequently, Miso can now lease Flippy to restaurants for $2,000 a month; this equates to approximately $3 an hour, though this will vary depending on an eatery’s particular needs. In contrast, the Times informs that a human fast-food employee can cost $4,000 to $10,000 a month or more.

Of course, humans have long been displaced — and have had their lives made easier — by machinery, whether it’s tractors making farm work less laborious or factory equipment that accomplishes tedious, formerly people-performed tasks. The difference is that with AI’s advent, robots can work autonomously at jobs requiring greater complexity. This means they can fill more roles — and displace more human workers.

While this will pose societal challenges regardless, government policies can accelerate this displacement. For example, the Times mentions that Flippy will make its first major inroads in “markets with higher labor … costs,” a phenomenon which, of course, is exacerbated by minimum wage laws.

Campaigning on a $15 minimum wage, as socialist Bernie Sanders (I-Vt.) does, certainly is effective demagoguery. But to paraphrase economist Dr. Walter E. Williams, would you rather have some jobs available at $8 an hour or no jobs available at $15 an hour?

Employers respond to minimum wage laws rationally. If, for instance, an employee only brings $14 an hour of value to a business, a boss won’t pay him $15 an hour in deference to a law. He’ll instead reduce staff, automate or, if worse comes to worst, shutter the business.

Minimum wage laws also effect discrimination against low-skilled, inexperienced, or otherwise less desirable workers. For example, employers may hire green 17-year-olds if they can pay them $8 an hour; if they have to pay $15, however, and can retain more experienced 20-somethings at that rate, that’s generally what they’ll do. This robs the inexperienced of the opportunity to work, build skills and a résumé so they can eventually command higher wages based on merit.

In fact and as Dr. Williams has pointed out, this discriminatory effect was not a bug but a feature when minimum wage laws were conceived: They were originally instituted to keep blacks, who’d work for less money, out of certain fields.

Regardless of the laws, though, robots will increasingly displace workers as it’s hard to compete with a $3-an-hour automaton that exists only to toil. This reality puts the lie to another demagogic appeal: that we need to increase low-skilled immigration. Not only do we still have 95 million Americans not in the labor force with six million available for work, but welcoming millions more low-skilled immigrants simply means a larger future underclass of unemployed individuals.

This said, a large underclass is precisely what statist politicians want. This brings us to another significant advantage offered by robots: They don’t get citizenship and go on the public dole — and then vote for socialists.

Selwyn Duke (@SelwynDuke) has written for The New American for more than a decade. He has also written for The Hill, Observer, The American Conservative, WorldNetDaily, American Thinker, and many other print and online publications. In addition, he has contributed to college textbooks published by Gale-Cengage Learning, has appeared on television, and is a frequent guest on