Regulators drop their beef with McDonald’s 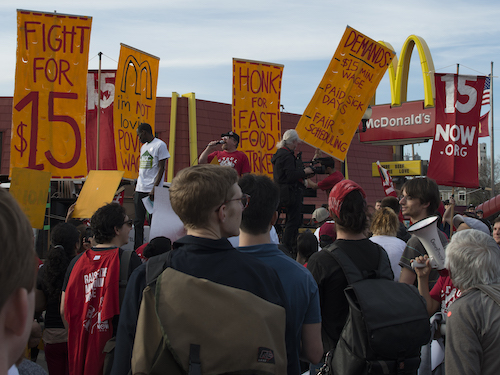 Regulators drop their beef with McDonald’s

A particularly harmful Obama-era labor rule, designed to fill union coffers while harming small business owners, is coming to an end. In a rule to be published tomorrow, the National Labor Relations Board upholds common sense and balances the scales of justice.

The NLRB rule rejects union demands that the national headquarters of a franchise be punished for labor violations committed by local franchisees.

The trigger came when local McDonald’s owners allegedly fired employees trying to unionize their workforce. The NLRB ruled that complaints at only 0.5 percent of McDonald’s 14,000 franchises had any merit. But in December 2014, the NLRB faulted the national franchisor, McDonald’s USA, alongside its franchisees.

For decades, the federal government held that the national office could only be held liable for actions in its local franchises if it qualified as a “joint employer” – that is, if it exercised “direct and immediate control” over a location’s employees. Otherwise, the local franchisee would be held responsible for his or her actions, not the franchise name that happened to hang over the drive thru.

But in the Obama years the NLRB, at the urging of the Service Employees International Union, changed the standard to “indirect control.”

Why did the Obama administration change the rule? It wanted to super-size labor unions.

First, the newer, laxer standard would allow anyone who has a beef with a local McDonald’s manager to sue the corporation itself. That kind of financial jackpot would prove more tempting to unscrupulous lawyers than the establishment’s crispy, golden fries. Shaking down the Golden Arches for a pot of gold would clog the nation’s court systems more effectively than (insert menu item of choice).

Second, the SEIU spent an estimated $182 million trying to organize the fast food industry, with little success. SEIU organizers hope that McDonald’s USA will sign a “neutrality agreement,” which silences employers from presenting the negative points of union membership. They also often give unions employees’ home addresses, and contain “card check” provisions that eliminate employees’ right to a secret ballot when deciding whether to unionize. If the national headquarters is a “joint employer,” it can bind all of its franchises at once.

Both of these goals would be windfalls for organized labor, which has seen its numbers decimated in the wake of the Supreme Court’s Janus v. AFSCME ruling, giving workers greater choice in union representation. The SEIU lost 94 percent of agency shop employees, who chose not to join the 1.9-million-member union but were forced to pay union dues anyway.

The thought of unionizing fast food workers makes organizers’ mouths water. The industry’s high turnover rate means they can collect a regular flow of new membership dues, while doing little to benefit workers during the time they work the fryer or fire the guacamole gun. The Capital Research Center calculated that unions would collect $155 million by organizing McDonald’s, including “$45 million in from initiation fees alone.”

Collecting tens of millions of dollars for nothing? They’re lovin’ it. But the unions’ meal deal would not be appetizing for small business owners or employees.

The new incentive to file lawsuits would drive up business insurance, placing the dream of owning their own business out of reach of the middle class. To stave off lawsuits, the national headquarters will micromanage local businesses or preemptively deny agreements to those with little business experience. Meanwhile, the SEIU’s “Fight for $15” campaign would cost between 1.3 million and 3.7 million jobs, many of them at McDonald’s. Nearly 98 percent of people making minimum wage are under the age of 24, trying to break into the labor market. Aiding well-heeled unions at the cost of the poor, the young, and the middle class hardly sounds like social justice.

The greatest offense the federal labor bureaucracy’s action would inflict is its offense against justice – a word often misinterpreted by the measure’s supporters. The lax NLRB rule would allow unions and lawyers to plunder anyone tied to the nation’s 800,000 franchise locations, although they had neither participation nor, perhaps, knowledge of the offense. The Bible condemns this in the words of the prophet Ezekiel:

The SEIU’s standard confuses the actions of one person to damage the reputation of another. New York City Mayor Bill de Blasio used a similar sleight-of-hand on New Year’s Eve, when he bashed Domino’s for the actions of one of its franchisees.

Thankfully, the issue is temporarily at rest. The Trump administration dropped the court case, three years into its administration, and hammered out a settlement last December. The NLRB will codify the traditional understanding of the relationship into law.

Fast food franchisees can stop worrying about federal regulatory overreach and focus on the job we ask of them – like fixing the ice cream machine.

(Photo credit: Fibonacci Blue. This photo has been cropped. CC BY 2.0.)