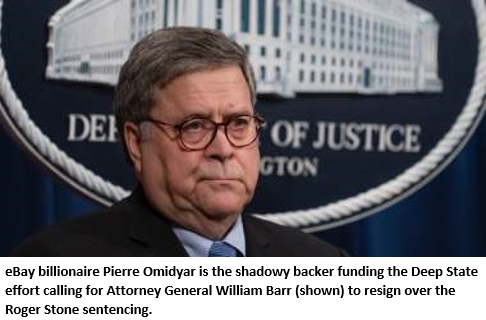 The Leftist jihad against Attorney General William Barr persists, with the Fake News industrial complex providing new daily headlines for every ex-DOJ employee who decides to jump on board the bandwagon demanding that Barr resign. The attacks on Barr continue even though he has been vindicated by U.S. District Judge Amy Berman Jackson’s much-anticipated decision on February 20 to sentence Roger Stone, an associate of President Donald Trump, to 40 months in prison. Judge Jackson, a liberal-left appointee of Barack Obama, agreed with Attorney General Barr that the seven- to nine-year sentence recommended by Stone’s federal prosecutors was too harsh.

For obvious political motives, the four federal prosecutors wanted to hang Stone, a 67-year-old with no prior record. Three of the prosecutors were minions on Robert Mueller’s special counsel staff who wasted millions of taxpayer dollars and plagued the Trump administration for two years, feeding the media mob with fodder for their discredited Trump-Russia conspiracy theory. The prosecutors — like their FBI co-conspirators James Comey, Peter Strzok, Lisa Page, Andrew McCabe, et al — are spiteful, anti-Trump, pro-Hilary partisans. They had to justify the Mueller witch hunt. And they had to make an example of Roger Stone.

Contrary to the critics’ charges, Attorney General Barr’s recommendation that the seven- to nine-year sentence be reduced was not “unethical,” “illegal,” or “unprecedented,” nor was it “interference in the fair administration of justice.” It is his job to supervise the prosecutors under him and make sure they are not abusing the extraordinary powers bestowed on them to push political agendas and punish political opponents. Barr’s recommendation was just that — a recommendation, not a demand or an order. It merely objected to the exceptionally harsh sentence asked for by the prosecutors, but did not specify any length of sentence for Stone, leaving that up to Judge Jackson’s discretion.

Rather than accepting their boss’s decision to override an inappropriate sentencing request, the querulous quartet decided to make a political statement by resigning from the case. It was a statement aimed at hurting Attorney General Barr and President Trump. And it is hard to escape the conclusion that they coordinated their actions with the folks who had an instant “outrage” campaign all cued up to bring a couple thousand former DOJ swamp creatures into the chorus line denouncing Barr and Trump.

In short, here are 10 key takeaways from the ongoing Trump-Barr-Stone “scandal” (with the details provided further below):

In addition, Attorney General Barr has exposed and opposed the Left’s conspiratorial use of lawsuits filed with leftist judges to get an unprecedented number of nationwide injunctions the purpose of which is to thwart the law and block Trump policies, especially involving immigration matters. So much for the constant prattling about the Constitution and the “rule of law” by the Pelosi-Schiff-Schumer-CNN choir, as they continue their decades-long crusade to destroy the rule of lw and the Constitution’s checks and balances.

Why the non-stop vitriol against Barr? The “Get Barr” campaign is but the latest in the Left’s failed coup efforts to undo the 2016 elections and remove President Trump. They have to try something; nothing else has worked for them thus far.

The disruptive tactics of the indivisible mobs hasn’t worked.

CNN, particularly, swooned over him, with reporter April Ryan posting a photo of herself clinging to Avenatti at a bash at Don Lemon’s pad. Avenatti further endeared himself to the Trump haters by orchestrating the vicious smears against Supreme Court nominee Brett Kavanaugh.

It should be clear to everyone by now that the virulent HateTrump/DefyTrump/ImpeachTrump crazies in the Democratic Party and the media will never stop. Ditto for the NeverTrump neoconservatives of the GOP. They are all hell-bent to Remove Trump by any means possible. Their repeated failures to do so thus far have only made them more spiteful and more malicious.

The current jihad against William Barr is their latest ploy. One of the primary behind-the-scenes maestros orchestrating the current faux outrage over Attorney General William Barr is Pierre Omidyar, the left-wing activist and billionaire founder of eBay. The 2,000-plus ex-Department of Justice employees who are calling for Barr’s resignation did not come together spontaneously as media accounts are trying to make it appear. They were recruited and organized by Omidyar’s troops operating through “Protect Democracy,” one of the many anti-Trump organizations he has set up and/or funded over the past several years.

Not surprisingly, the anti-Trump major media are helping Omidyar with a cloak of invisibility. The New York Times (naturally) led off the anti-Barr effort with an article on February 16 entitled “Former Justice Dept. Lawyers Press for Barr to Step Down.” The Times reported: “More than 1,100 former federal prosecutors and Justice Department officials called on Attorney General William P. Barr on Sunday to step down after he intervened last week to lower the Justice Department’s sentencing recommendation for President Trump’s longtime friend Roger J. Stone Jr.”

According to the Times story, the signatures for the letter demanding Barr’s resignation were gathered by a group called Protect Democracy, which the Times deceptively described merely as “a nonprofit legal group.” Hmm, interesting. Is that all the information that is publicly available about Protect Democracy? It would seem so, since virtually all the rest of the MSM mob have followed suit, failing to dig any deeper than the screed handed to them by the Protect Democracy public relations flaks.

Even a Journalism 101 student would have at least gone to the Protect Democracy website and quickly discovered that it is a left-tilted, anti-Trump bastion of former Obama staffers who are fronting for Omidyar, who is a political pal of George Soros and Bill and Hillary Clinton, the owner of a large media empire, and funder of an entire network of left-wing activists. He has also, along with Soros, had a long relationship with the Obama-Clinton State Department and the CIA, promoting various regime-change, top-down “revolutions” around the world.

Julie Kelly, who has exposed the Omidyar Network in previous articles at American Greatness, revealed in a February 17 column what the prostitute press was concealing. In “Left-Wing Group Organized Barr Attack Letter,” Kelly notes that “In 2018, according to the group’s most recent tax filing, Protect Democracy collected nearly $7 million in donations; Omidyar’s most politically-active nonprofit, Democracy Fund, has donated $2 million since 2017. Democracy Fund is spending tens of millions each year to underwrite dozens of anti-Trump projects.”

Our own drilling into Protect Democracy quickly revealed the following pertinent information that the “journalists” of Big Media decided was not important or relevant enough to give the American public. Take a look at the “progressive” pedigrees of some of the Protect Democracy’s staff, board members, and advisors:

And that’s not all, but need we belabor the point? Can it get more blatant than this? A gaggle of former Obama-Holder-Lynch DOJ attorneys, along with veteran Democrat Party operatives and left-wing staffers from Schiff, Schumer, Warren, Soros, La Raza, and the ACLU, are spearheading another coup attempt, this time aimed at crippling the Trump administration by forcing a resignation of Attorney General Barr. And their co-conspirators in the establishment media are covering for them by shamelessly promoting the lie that Pierre Omidyar’s Protect Democracy is “nonpartisan” and a “nonprofit legal group.”

Do we really need any more proof that President Trump was absolutely correct in identifying “The FAKE NEWS media (failing @nytimes, @NBCNews, @ABC, @CBS, @CNN)” as the “enemy of the American People!”?