House Ignores ERA Deadline So It Can Be Deemed Ratified. What Now? 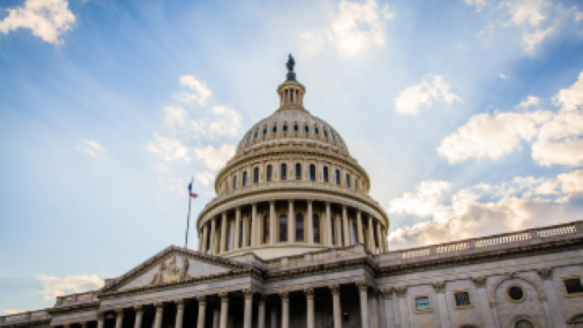 House Ignores ERA Deadline So It Can Be Deemed Ratified. What Now?

In a move that ignores both logic and basic reading comprehension skills, the House of Representatives passed a resolution Thursday to pretend that the 1982 deadline for ratification of the Equal Rights Amendment never existed. The 232 to 183 vote was almost completely along partisan lines. The only exceptions were five GOP House members who sided with Democrats on the vote.

The zombie ERA has become an issue in recent weeks due to Virginia’s becoming the 38th state to ratify the ERA in January, and 38 (three-fourths of the 50 states) ratifications are needed for an amendment to become part of the Constitution. However, not only did the ratification deadline expire decades ago, but four states rescinded their previous ratifications. In order to achieve the 38-state threshold, ERA advocates want to count states that ratified the

ERA after the deadline, while not counting states that withdrew their applications prior to the deadline.

Passage of the resolution in the House raises multiple concerns.

First, regardless of where a person lands on this particular issue, ignoring the deadline, and also ignoring the states that withdrew their prior ratification, sets a dangerous precedent. Not only would this mean that a legislature cannot undo what it had previously done, but it could also result in an amendment being adopted that is not even supported by a majority of the states at the time of its adoption, let alone three-fourths of the states.

The ERA failed to reach the sufficient three-fourths ratification number by its initial deadline in 1979, so Congress questionably extended the deadline another two and one-half years, to 1982. The ERA still failed to be ratified by that new and improved deadline. Now, almost 40 years after the ERA flatlined, Democrats are exhuming it and claiming to disregard a deadline that has long since past. And although the House-passed resolution explicitly states that “notwithstanding any time limit,” the amendment shall become part of the Constitution “whenever ratified by the legislatures of three-fourths of the several States,” it makes no acknowledgement that several states have rescinded their prior ratifications.

Ignoring the specified deadline, and not taking into consideration states that reversed their pro-ratification position, not only means that an amendment could languish for many decades or centuries before being adopted, it also means that an amendment could be added to the Constitution that is supported by only a single state legislature (the last to ratify) at the time of its adoption.

Secondly the passage of this resolution by the House violates the basic rules of amending the Constitution set forth in Article V, which requires that two-thirds of both Houses in Congress (or two-thirds of the state legislatures) propose an amendment, which then becomes part of the Constitution if ratified by three-fourths of either the state legislatures or special conventions convened in those states for ratification. The ERA was submitted to the states for ratification in 1972, after having been approved by two-thirds majority votes in the House and Senate. Yet the resolution passed by the House on Thursday to ignore the deadline was passed on the basis of a simple majority vote. If that is possible, Article V has no meaning at all.

Finally, the ERA was approved by Congress during an entirely different era (no pun intended). In 1972, (if this writer may borrow from the theme song of All in the Family), girls were girls and men were men. Given the recent insanity that claims that girls can be boys and boys can be girls, the real agenda of the Democrats in pushing this zombie amendment is clear. Adding the Equal Rights Amendment to the Constitution would mean the elimination of separate bathroom or locker room facilities for men and women, based on applying the legal doctrine  that “separate is not equal” to the sexes. It would mean that any military draft would need to include women as well as men and that women serving in the military would have to have equal access to the same combat positions as men. In the private sector, it would mean lawsuits to end discrimination in sports competitions where men and women compete separately. And it would likely mean societal changes going way beyond equal opportunity for women to include preferences for a multitude of imagined genders. The consequences of including the ERA in the Constitution would be detrimental to all of us, including women.

Besides, ask yourself this question: In 2020, are women in need of any equality they don’t already possess? Is there any business owner who would choose to ignore the benefit to his profit margin by hiring a less qualified man over a more qualified woman? Of course not. This writer has long said of the supposed need for regulations and laws regarding how minorities are treated in both the market place and the work place that the days where any such regulations could even be imagined to be justified are long gone. The only color that matters in business is green. The same principle applies to the sexes.

In a strange twist of politics making strange bed-fellows, the opposition to ignoring the ERA deadline has been joined by someone completely unexpected. Supreme Court Justice Ruth Bader-Ginsberg, who — as a feminist lawyer in the 1970s — cut her teeth as a champion for the ERA, told an audience at Georgetown University on Monday that she does not support reviving the ERA after its expired deadline. “I would like to see a new beginning. I’d like it to start over,” she said, in answer to a question from a journalist during the event. She went further, pointing out that there is a hypocritical duplicity on the side of Democrats on this issue, asking the question, “If you count a latecomer on the plus side, how can you disregard states that said we’ve changed our minds?”

Ginsberg’s remarks may indicate that the ERA is actually dead after all, and that attempts to prop it up may amount to little more than a Weekend at Bernie’s moment for Democrats. Even the liberal mainstream media have been forced to concede that fact, based on Ginsberg’s statements. The New York Times reported:

Justice Ginsburg’s comments gave a lift to opponents of the measure, including Senator Lindsey Graham, Republican of South Carolina and chairman of the Judiciary Committee, who said Thursday that the deadline extension would be rejected by the Senate.

“It is clear the statutory period to have passed the E.R.A. expired decades ago and it would be necessary for it to be reintroduced to have constitutional viability,” Mr. Graham said in a statement.

And The Atlantic reported:

As ERA opponents have noted, Ginsburg had previously hinted at her position by saying in a speech last year that backers of the amendment should start “over again.”

But her comments this week left far less ambiguity, and they could not have come at a worse time for ERA advocates, who were poised to celebrate House passage on Thursday of a resolution formally removing the deadline Congress had originally put in place. Senate Republicans have already cited the justice’s view as validation of their intention not to act on the measure. By weighing in now, Ginsburg cast doubt on the entire pursuit of ERA ratification; the issue will likely be resolved by the courts, and without Ginsburg’s vote, defeat in the Supreme Court is all but certain.

Even taking that at face value, with the fate of the integrity of the Constitution at stake, nothing can be taken for granted. After all, Democrats have completely departed from reality. Please take a moment to call, write, email, and fax your senators and tell them to oppose any extension to the ERA.

C.Mitchell Shaw is a freelance journalist and public speaker who addresses a range of topics related to liberty and the U.S. Constitution. A strong privacy advocate, he was a privacy nerd before it was cool. You can check out his Enemy of the Surveillance State podcast at enemyofsurveillance.podbean.com