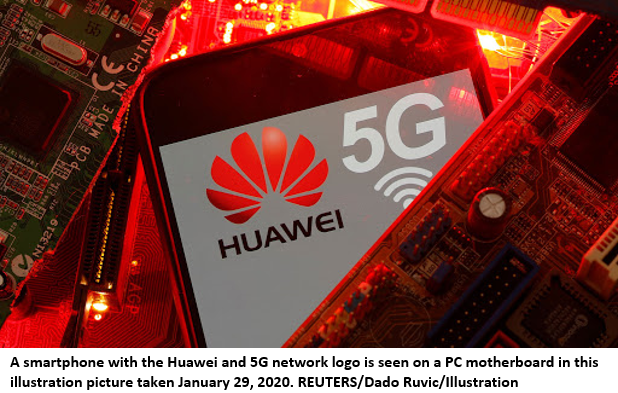 A previous article at Sons of Liberty Media titled “Chinese Influences American Society More Than Citizens Know With Full Government and Politician Knowledge” discussed the various avenues in which the Chinese Communist Party government influences our lives in America by using corporations and Wall Street as proxies in a war on America.  Experts, retired Air Force Brigadier General Robert Spalding and Rosemary Gibson, shed light on China’s influence of politicians and government and control of the pharmaceutical industry that could devastate the US healthcare system should materials be withheld that are needed for making medications.  Yesterday, Breitbart News reported on a Sirius XM’s Breitbart News Daily interview with Gordon Chang who warned about Huawei technology being imbedded in upcoming 5G technology that will allow China to “deploy ubiquitous surveillance” and control over America.

Integration of Huawei technology in forthcoming 5G networks will enable China to deploy ubiquitous surveillance and control over America and the broader West, warned Gordon Chang, Daily Bast columnist and author of The Coming Collapse of China, in a Monday interview on SiriusXM’s Breitbart News Daily with host Alex Marlow.

“In London and in many other capitals, China has bought the elites,” said Chang, referring to some Western political elites’ inexplicable decisions to include Huawei [technologies] in telecommunications infrastructure development,” adding, “[Huawei] is used by Beijing to spy.” [Emphasis Mine]

Chang continued, “If Huawei is embedded in 5G networks, they’ll scoop up the world’s data. They’ll be able to control the world’s devices on the Internet of things. 5G is where much of the future is determined, and we are very, very, very far behind China.”

Retired Air Force Brig. Gen. Robert Spalding offered a similar warning when explaining how Huawei would be used by China to manipulate and surveil Western populations if partnered with Western telecommunications companies and authorities on 5G network development projects.

“Trump’s efforts over the years — starting in 2017, almost as soon as he took office — to protect American supply chains [from dependence on China] are really good,” Chang said. “The coronavirus epidemic shows the wisdom of President Trump’s approach.”

To all American citizens who still believe it’s acceptable for the American government to hoover all citizens’ information, phone calls, emails and internet activity because it keeps “us” safe, how do you feel knowing the same American companies who assist the US government to get your information partner with China to imbed technology that would allow the Chinese Communist Party government access to that same information through stealth deployment of spy technology?  Still think all this surveillance and spying is about you feeling safe?  You might want to rethink your position and lobby for your rights guaranteed and protected by the Fourth Amendment of the Constitution for the united States of America.

The Chinese government is already using American corporations who conduct business in China to influence our society by positioning itself to be the “global Big Brother” concerning controlling freedoms of speech and expression.  It has been seen with the NBA and the gaming company Activision/ Blizzard.  While many Americans may not be affected by these two entities, China’s coupling with American telecommunications companies will affect all Americans.  As they say, the devil is in the details and finding Chinese government influence in two American entities means it probably is present in others.  Now we know it is.

Breitbart News continued with its report.

Chang added, “Right now, we’re seeing container ships leave China ten percent full, which is obviously a lot less than normal. … The result of this is we are going to move our supply chains out of China, which is absolutely a good thing for a number of reasons, but also we’re going to be making stuff much closer to home — this is proximity manufacturing — which now, seems to be quite wise.

Sen. Tom Cotton (R-AK) has entertained the possibility of a relationship between the coronavirus’s origin and a virology institute in Wuhan, China. Chang indirectly referred to derision of Cotton’s considerations from the New York Times, Washington Post, MSNBC, and similar news media outlets as a “conspiracy theory.”

“Senator Tom Cotton has taken a lot of flak recently for suggesting that we should still consider the Wuhan virology institute as a source for this,” Chang said. “He’s absolutely right. Until we know more, you have to keep all of the scenarios on the table. Right now, we can’t rule anything out.”

Chang then responded to Michael Bloomberg’s claim that the Chinese Communist Party enjoys popular consent of its governance from the Chinese people. “Xi Jinping is not a dictator,” said Bloomberg in September 2019, adding, “No government survives without the will of the majority of its people.”

Michael Bloomberg “killed a number” of stories critical of the Chinese government and Chinese officials slated for publication by Bloomberg News, noted Chang. [Emphasis Mine,]

Chang remarked, “[Michael Bloomberg] has said, in recent times, some very slavish pro-Beijing statements. He’s got to be called to account for that, and I think those statements make him unfit to be president, because the highest duty of the president is to defend the U.S. against foreign enemies, and we have no greater enemy than China. Calling China as a ‘partner’ and ‘friend,’ as Bloomberg does, is just completely inappropriate.” [Emphasis Mine.]

China has also been critical of the right of the people of the united States to keep and bear arms, an inherent right bestowed by God that government has no authority to regulate or infringe upon.  In fact, the Chinese government complained to the United Nations about Americans possessing guns, going so far as to recommend Americans be disarmed.  And now, Nanny Bloomberg, who appears to have been bought and paid for by the Chinese government, has entered the race to be nominated as the Democratic candidate for president.  The man who rabidly supports gun prohibition/confiscation and the murder of innocent babies in the womb, during birth and after birth is now polling in third place behind Bernie Sanders.  It appears that the former New York City mayor is beginning to surge with black voters.

An avowed Communist and a man who may have been bought and paid for by China are on the Democratic National Convention stage vying for the party nomination to run for president in 2020.  Bloomberg, after calling China a “partner” and “friend”, has slammed young people for supporting Democratic socialism, which is the same as straight-out full-blown socialism.  However, he wants to “dumb down” the system more.  (sigh) Wow.  Moreover, it is rumored that Nanny Bloomberg could tap “Daddy” Hillary Clinton as his running mate.

RELATED:  73-Year-Old Virginia Man Arrested & Charged With Felonies For Making Moonshine In His Own Home

No candidate running for the Democratic, now Socialist, Party nomination is good for America, particularly those with ties to China through holding similar ideology, being bought and paid for by China, or advocating for China through “partnerships”.  The push for global government is ramping up and China appears to be moving to be the dominant entity to head that government.  Why else would the Chinese government partner with western corporations, buy the “elite” and implant stealth surveillance technology into America’s 5G network?  With the ability to access every American citizen’s data, wouldn’t the Chinese government be able to obtain information which could be used to blackmail politicians?  Of course.

US citizens are witnessing American corporations’ development of a “social credit system” similar to the one in operation in China to implement here.  This is clearly a violation of liberty and freedom of every American should this system go live either overtly or covertly.  But, the attention of American citizens is being focused on the “trivial” dog and pony shows coming out of Washington, Trump “taking a lap in The Beast” at the Daytona 500, and the mud-slinging antics of the charlatan fakes vying for the Democratic (Socialist) Party nomination to run for president.  Remember, all these politicians and government entities know about China’s infiltration to influence American society and have done absolutely nothing about it.  In fact, they all helped it along through corporate cronyism.

There is no doubt that China, speaking of the communist Chinese government, is a threat to the US and the West, in general.  With their entering the 5G network through technological elements in the US, our information is open to abuse, misuse, and criminal activity, such as identity theft, that could decimate many individuals as well as the unwarranted surveillance and hoovering of all information about all citizens in violation of our rights recognized and guaranteed as protected in the Fourth Amendment.  This is in addition to the monopoly on pharmaceuticals the Chinese government has.  We are vulnerable!

The charlatans in government are selling you out and have sold you out, friends, to their Chinese puppet masters behind the corporation lobbyists.  Politicians know all of this and have ignored it – Democrats and Republican alike, the unconstitutional parties.  Remember all of this next time you are supporting any candidate.  If you get a chance, ask them about this and listen to the crickets or get your shoes dirty in the manure they are going to feed you.

Suzanne Hamner (pen name) is a registered nurse, grandmother of 4, and a political independent residing in the state of Georgia, who is trying to mobilize the Christian community in her area to stand up and speak out against tyrannical government, invasion by totalitarian political systems masquerading as religion and get back to the basics of education.