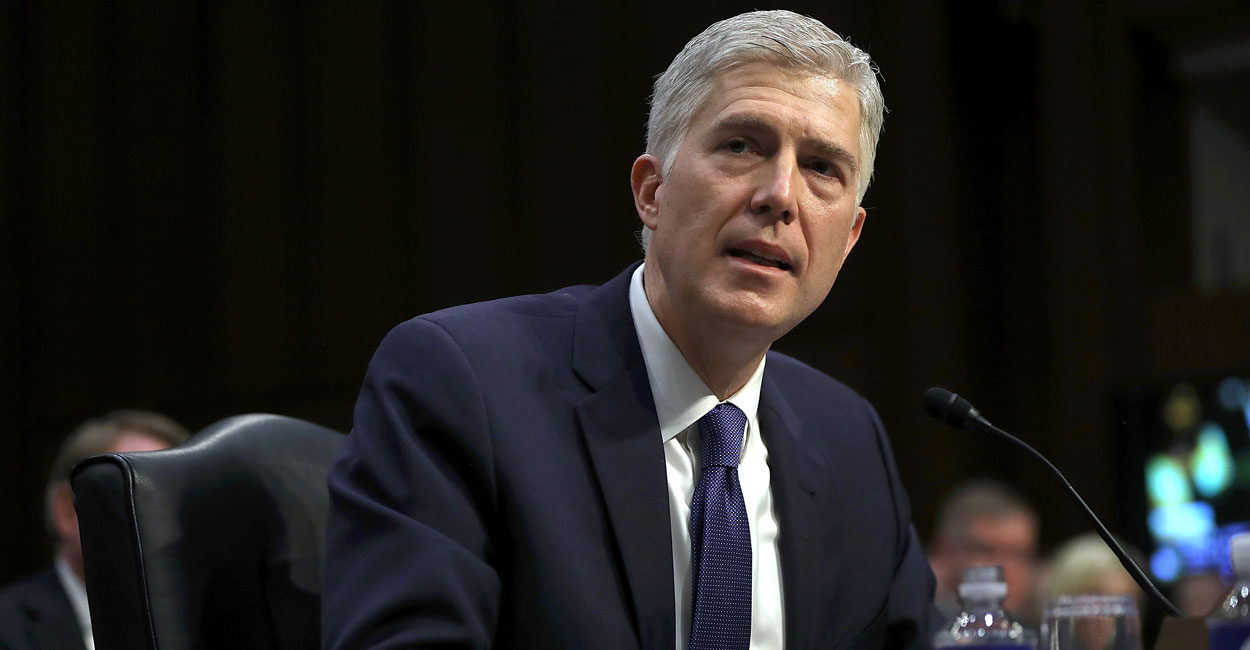 “The real problem here is the increasingly common practice of trial courts ordering relief that transcends the concurring cases before them,” wrote Justice Neil Gorsuch, pictured in 2017, recently. “Whether framed as injunctions of ‘nationwide,’ ‘universal,’ or ‘cosmic’ scope, these orders share the same basic flaw—they direct how the defendant must act toward persons who are not parties to the case.” (Photo: Justin Sullivan/Getty Images)

Question: What is the difference between God and a federal judge?

Answer: God knows that He isn’t a federal judge.

On Feb. 6, U.S. District Judge Loretta Biggs of North Carolina issued an injunction barring the Trump administration from implementing a new policy that changes how the government calculates the duration of an illegal immigrant’s unlawful presence in the country.

Although an injunction is the correct legal tool to stop someone from doing something, Biggs had a choice in how broad that injunction should be.

Biggs chose to issue a nationwide injunction. Actually, that’s a misnomer. These are better called “universal” or even “absent-party” injunctions, because they aren’t limited either by their geographic scope or the parties they cover.

Instead, they stop the government from enforcing a law or policy against anyone, anywhere.

So, what exactly are these strange things, and are they legal?

As always, it’s wise to start our analysis with the Constitution. The Constitution defines the judicial branch’s role in our system of government. Judges don’t pass laws or set broad policies, because that’s the job of the other branches.

Instead, according to Article III, judges decide “Cases” and “Controversies,” which are actual legal disputes between specific parties. Whether civil suits between private parties or criminal cases involving the government, these disputes are brought by the parties, and judges settle them for the parties.

It makes sense, therefore, that when a judge issues an injunction in the process of deciding a particular case, that injunction will not cover more than is necessary.

Historically, when a plaintiff successfully challenged a law as unconstitutional, for example, the judge would most often block the government from enforcing the law against the plaintiff, rather than completely wipe that law from the books.

But the judiciary has grown more powerful than America’s Founders intended and, since the 1960s, this has included issuing universal injunctions.

This type of injunction has become increasingly common over the past few decades as political activists try to enlist judges to make the kind of widespread policy changes that the legislative or executive branches are designed to handle.

Like a gavel thrown into a well-oiled machine, these universal injunctions cause a host of problems for our constitutional government—and for the judiciary itself.

First, they empower judges to exercise power over the entire government, rather than just the parties who brought a case before them.

Third, they undermine public confidence in the judiciary by giving activists judges near limitless power to undo the laws and policies of the democratically accountable branches of government.

One infamous activist judge, the now-deceased Stephen Reinhardt, once joked of his lawless decisions that “they [the Supreme Court] can’t catch them all.”

When that happens, the Justice Department often appeals on an emergency basis. That’s not good, because it doesn’t give the higher courts, including the Supreme Court, the time they need to make sure they get the answer right.

The Supreme Court, in particular, prefers to weigh in on a legal issue only after many lower courts, lawyers, and legal scholars have had time to discuss it. That debate sharpens the arguments and refines the issues. Emergency appeals, however, eliminate that.

One of the questions presented there is whether the court of appeals erred when it affirmed a universal injunction striking down regulations that would have allowed employers with sincere religious or moral objections to opt out of providing contraceptive coverage in employers’ insurance plans.

The high court should take this opportunity to end the practice of issuing universal injunctions. It should remind the lower courts that their power is limited to resolving cases and controversies, and that they are not gods sitting in judgment over the rest of the government.

GianCarlo Canaparo is a legal fellow in the Edwin Meese III Center for Legal and Judicial Studies at The Heritage Foundation.