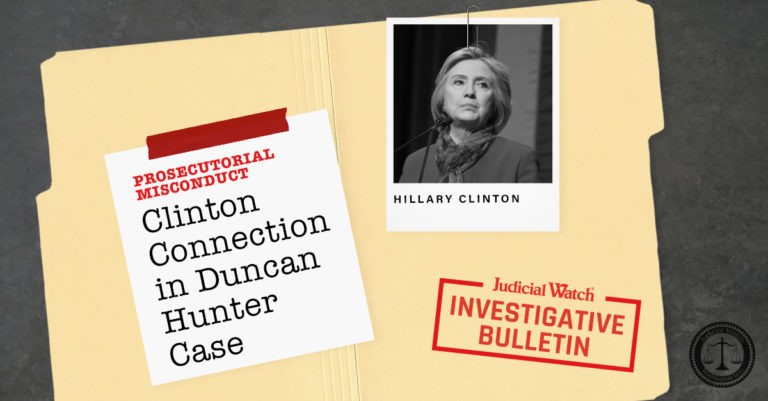 It looked like a classic Justice Department squeeze play: pile a boatload of corruption charges on then-Representative Duncan Hunter, Republican of California, drag in his family, and plead it down to a single count and a resignation. But Hunter fought back. And now Judicial Watch has uncovered new evidence supporting allegations of misconduct by prosecutors in the case allied with Hillary Clinton.

Hunter and his wife were indicted in August 2018 on dozens of corruption charges related to misuse of campaign funds. Later, in separate court actions, they each pleaded guilty to a single charge. Hunter resigned from Congress in January. 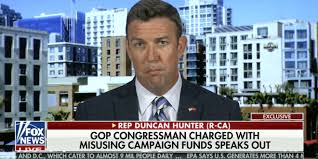 In a June 2017 motion to dismiss, Hunter’s attorneys noted that the two lead Justice Department lawyers on the case, Alana Robinson and Emily Allen, had attended a 2015 political fundraiser for then-presidential candidate Hillary Clinton at the La Jolla mansion of a wealthy supporter. Hunter was a vocal critic of Mrs. Clinton and an early supporter of Donald Trump.

“In light of subsequent events and their initiation of the criminal investigation of Congressman Hunter,” Hunter’s lawyers wrote, the attendance at the fundraiser by the two prosecutors “raises serious concerns regarding a conflict of interest and a loss of impartiality.” Both prosecutors are registered Democrats. “The undeniable facts are that both attended [the fundraiser] for one purpose and one purpose only—they attended to meet the person they believed would be the next President of the United States.”

The Justice Department responded with a mystifying claim. It told a San Diego court that Robinson and Allen were asked to attend the fundraiser “in the event of a protective security related incident where immediate prosecutorial guidance would be necessary.”

An earlier Justice Department letter said that the prosecutors were at the event “in their official capacity assisting law enforcement.”

Now, here at Judicial Watch, we’ve been around a long time. We can’t remember ever hearing of a fundraiser that needed the presence of two U.S. Attorneys in case “immediate prosecutorial guidance would be necessary.” It’s a laughable claim—except that someone’s freedom is at stake.

So let’s call this for what it really is: a lie to cover-up inappropriate conduct.

New documents obtained by Judicial Watch support the conclusion that Robinson and Allen were at the Clinton fundraiser because they were Clinton supporters, not on standby for “prosecutorial guidance” while the monied class gathered on the glittering lawns of La Jolla. The documents raise serious questions about whether prosecutors misled the court. Lying to a judge of course is illegal. Violations of the Hatch Act may come into play here too, as well as violations of Justice Department guidelines.

The documents—emails obtained by Judicial Watch under a Freedom of Information Act lawsuit against the Justice Department—suggest that Robinson and Allen were thrilled to be at the Clinton event. Although names are blacked out in the heavily redacted emails, it’s clear that the correspondence is between the two prosecutors, who were the subjects of the Judicial Watch lawsuit.

“Thank you so much for the invitation to this morning’s event,” one email reads. “I was blown away by your incredible hospitality and can’t thank you enough for allowing us to crash that fabulous party. It was a really memorable morning.”

Another email says: “you totally downplayed that amazing invitation! I had no idea it would be so spectacular. I didn’t even realize we’d be invited in! I am so grateful for the invitation, thank you.”

Robinson has left the U.S. Attorney’s office and is running for a judgeship in Southern California. Allen is head of the federal public corruption unit in San Diego. Duncan Hunter is scheduled to be sentenced in March. That’s a good time for the judge to address charges of prosecutorial bias and misconduct in the case.