Is Bernie Sanders a Communist? 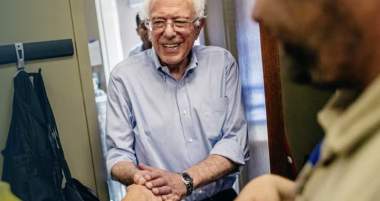 Is Bernie Sanders a Communist?

Is Bernie Sanders a communist? The president thinks so. At a rally in Richmond, Virginia, on Wednesday night, Donald Trump railed against Democratic hopeful Bernie Sanders, calling him a “socialist-slash-communist” and saying that his tax plan would “take everything.”

On Fox News Sunday Sanders had a chance to respond: “Obviously, I am not a communist. I presume the president knows the difference. Maybe he doesn’t.”

As French enlightenment philosopher Voltaire said, “If you wish to converse with me, define your terms.” Confucius warned of the danger: “When words lose their meaning, people lose their liberty.”

In his monumental Overview of America, John F. McManus defined the terms “fascism,” “Nazism,” “socialism,” and “communism.” He said they are all forms of total government, ranging from the least obvious, fascism, to the most obvious and blatant, communism. Fascism allows individuals to believe they are still free to run their businesses while operating under rules and regulations that tell them under what conditions they may operate — hiring, firing, advertising, selling, pricing, and so forth.

Nazism is more obvious: It’s a totalitarian economic system in which the government owns and operates many of the major industries while regulating others. Consider for example Hitler’s ownership of Volkswagen, which employed victims of concentration camps to build the “bucket car” used in World War II.

Socialism is more obvious: Government ownership and control of major industries: transportation, energy, housing, and so forth.

Communism has one redeeming feature, according to McManus: It is fully transparent in that it owns and controls everything.

In a letter written in March 1944, Ayn Rand said, “Fascism and Socialism are only superficial variations of the same monstrous theme — collectivism.”

That Bernie Sanders is a socialist is clear, not only by his own admission but by his consistent support for government takeovers of major industries. As far back as 1972, Sanders ran for the office of governor of Vermont on the Liberty Union Party (LUP) platform: nationalization of all banks and public ownership of all utilities, drug companies, and the major means of production such as factories. In a press release from his 1974 campaign for governor, Sanders advocated for “the public takeover of all privately owned electric companies in Vermont.”

Today he advocates for the government takeover of the health insurance industry and the replacing of the present energy industry with “green” power, costing many trillions and run by the federal government.

In 48 years then, nothing has changed. He is consistent. Bernie Sanders is a socialist.

But is he, as Trump noted, a communist?

In researching this article, this writer can find no evidence that Sanders ever joined the Communist Party USA. Surely he had close affiliations with the Socialist Workers Party, a communist front. He supported communist regimes in South America. He even celebrated his honeymoon with his second wife in Moscow, but there’s no membership.

But does that lack of evidence really matter?

Consider the inevitability of every socialist regime that is allowed to run its course. In his book The Road to Serfdom, author Friedrich Hayek warned “of the tyranny that inevitably results from government control of economic decision-making through central planning.”

Many socialists have the tragic illusion that by depriving private individuals of the power they possess in an individualistic system, and transferring this power to [the state], they thereby extinguish power. What they overlook is that by concentrating power … it is not merely transformed, but infinitely heightened….

When economic power is centralized as an instrument of political power it creates a degree of dependence scarcely distinguishable from slavery.

It has been well said that, in a country where the sole employer is the state, opposition means death by slow starvation.

Political science professor Rudolph Rummel first defined the end result of socialism’s inevitable morphing into communism: democide. The author of 24 books on the connection between collectivism and death, he defined “democide” as “the murder of any person or people by a government, including genocide, politicide, and mass murder.” He included “death by slow starvation,” as evidenced by the Ukrainian horror called the Great Famine that extinguished the lives of 10 million people on orders from Soviet Dictator Joe Stalin.

That is what Bernie Sanders, the socialist, is advocating. Whatever term is used, the one that best fits him is this: totalitarian.