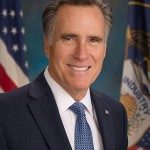 Let us not forget that Mitt Romney is not alone in his sanctimonious crusade against President Trump.  A number of other Republicans — including Marco Rubio, Rob Portman, Joni Ernst, Lamar Alexander, and Ben Sasse — have made CYA comments indicating that Trump did something “inappropriate” on his call with Ukrainian president Zelensky.  To straddle the political fence, however, they also said that his offense did not rise to the level of impeachment.  More CYA.

These are people who, though they did vote to acquit Trump, would switch sides in a heartbeat if they thought it was politically safe to do so.  Their faux-pious word of choice is “inappropriate.”  No crime, mind you — just “inappropriate” behavior.  It’s a safe word, because whether or not something is inappropriate is in the eyes of the beholder — meaning that it’s totally subjective.

And wasn’t it just a bit inappropriate for petulant Nancy to tear up the president’s SOTU speech in full view of millions of people?  Democrats, of course, thought it was a wonderful antic.  In fact, the uber odious Eric Swalwell insisted that Nancy showed “great restraint.”

Oh, yes, and how about Nancy saying that Trump’s attorneys should be disbarred?  Not Adam Schiff or Jerry Nadler, mind you.  No, it’s shady characters like Alan Dershowitz, Jay Sekulow, Pat Cipollone, and Patrick Philbin who must be stripped of their law licenses.  Not an inappropriate statement at all, right?

Actually, now that I think of it, I find pretty much everything about Nancy Pelosi to be inappropriate — including her annoying habit of forgetting to apply Poligrip to her ill-fitting dentures before making public appearances.  In fact, it’s grossly inappropriate.

Then there’s our scandal-free ex-prez, Barack Obama.  Wasn’t it inappropriate for him to declare that he wanted to fundamentally transform the United States of America, a country whose way of life he was elected to protect?

And how about when he said, “If they bring a knife to the fight, we bring a gun.”  This is the man whom Democrats to this day insist brought people together?  But, hey, it’s all in eyes of the beholder, right?

Perhaps Obama’s most inappropriate comment of all was when he said, “We’re gonna punish our enemies and we’re gonna reward our friends.”  How sweet.  I’ve often wondered who the enemies were to whom he was referring.  I guess Democrats know, because they loved it.

Speaking of presidents who did inappropriate things, wasn’t it inappropriate of FDR to try to pack the Supreme Court?  Or for Harry Truman to drop atomic bombs on heavily populated Japanese cities?  Or for JFK to refuse to openly support civil rights?

I won’t even bother to go into presidential scoundrels like Lyndon Johnson, Richard Nixon, Jimmy Carter, et al.  My point is that every president does lots of things that some people might arbitrarily believe are “inappropriate,” but no one ever suggests they should be put in jail.

Nevertheless, that’s exactly what the Dirty Dems and Pierre Delecto tried to do to Donald Trump.  They never stated an actual crime he had committed — just that it was inappropriate for him to try to find out why the former vice president’s son made millions of dollars, without having to do any work, in a country from which his father threatened to withhold foreign aid if a certain prosecutor was not fired.

Finally, we get to the king of inappropriate behavior, Mitt Romney, affectionately referred to by his closest friends as “St. Mitt.”  I honestly don’t recall ever hearing anything as inappropriate as St. Mitt calling a man running for president of the United States — whose endorsement he had sought and secured just four years earlier — a phony and a fraud, and, for good measure, adding that “dishonesty is (his) trademark.”  St. Mitt’s remarks made him sound more like an angry grade-schooler than a United States Senator or corporate plunderer.

Those who thought St. Mitt’s words and actions couldn’t get any more inappropriate were wrong, because shortly after Trump’s election he groveled before the president in an attempt to land the job of Secretary of State.  He even went so far as to say that “President-elect Trump is the very man who can lead us” to a better future.

Segue to 2020 and St. Mitt had yet another change of heart.  Citing his religious convictions and his oath to be an “impartial juror,” and saying that “God demanded it of me,” he voted to convict Trump on the abuse of power charge the Dirty Dems had lodged against him.  A cynic might suspect that the reason he voted not guilty on the second charge, obstruction of Congress, was to convince people that he was a champion of “impartial justice.”

The truth is that St. Mitt wouldn’t know “impartial justice” if it hit him in his ignoble snout.  The man is totally devoid of principle and is immoral to the core.  Trust me, his never-ending self-aggrandizement antics comprise nothing more than an attempt to convince people of his moral superiority.

Having said all this, I am obliged to point out that all human beings do things, at one time or another that some people might arbitrarily believe to be inappropriate.  Which is okay, because halfway intelligent/sane people do not demonize others for their (subjectively perceived) human failings.

However, what St. Mitt and his Democratic allies have done to Donald Trump over the past four years — and, by extension, to the tens of millions of people who support him — is way beyond just inappropriate.  It’s flagrant dishonesty and malevolence to a degree that some people might be inclined to refer to as pure evil.

Yes, Mitt, some people (not me!) might agree with you that Donald Trump’s actions were inappropriate, but you win the trophy for pure evilness hands down.