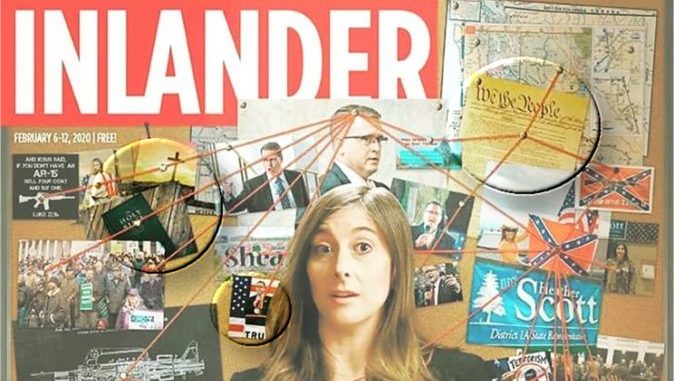 A Spokane tabloid recently published another smear piece against Representative Heather Scott from North Idaho. They attempted to tarnish the good legislator by tying her to Rep. Matt Shea of Spokane Valley, Washington, and the unreliable, biased, partisan hit piece referred to as the “Rampart Report.”

We all know and understand that the Rampart Report is really oppositional research for which the Democrats in Olympia have manipulated the taxpayers of Washington into paying $120,000.

Rep. Matt Shea is a highly effective legislator that works for the people, lower taxes and less regulations. As does Rep. Scott in Idaho. Their constituents know this, as this is the reason they have continued to get reelected within their Districts.

The Liberal extremists on the Left also understand this truth, hence the continuing smear campaigns in their tabloid papers, trying every way they can think of to convince the people that their version must be true.

This particular tabloid is known for it’s communist sympathies, as is the young blogger they employ to write this drivel. They have worked overtime to change this country to a Socialist/Communist state, and will not stop until they succeed in their mission.

I can’t really blame young Daniel, the uninformed blogger, as he is just doing what he is directed to do. As a likely product of public education, he and other young millennials are taught to embrace Socialism. They are too young to remember the cold war, the murderous Che Guevara, or the true facts about Communism.

Neither are they instilled with a pride in civic duty or a love of the Constitution. They do not understand that the Constitution guarantees the people a wide array of freedoms, from a strong rule of law to freedoms of expression and religion.

These young people do not see that they are allowed to argue against these freedoms just because of them. Yet, if they win their arguments they will also have to give up these very freedoms.

No, I do not believe that young Daniel the blogger truly understands what it means to advocate Socialism like he does.

But the tabloid surely does understand it.

The Inlander knows exactly what it is doing. It proves this through the graphics it printed on the cover, advertising the fledgling cub reporter’s regurgitated hit piece on Rep. Scott.

The cover shows the connections that it wants you to see. The connections to all that is bad about these conservatives. They want you to subliminally note that anything to do with them must be abolished, as it goes against their Socialist ideology.

Note the Bible, and the Constitution, and the American Flag.

They are saying, through this cover, that these things are horrific and must be banned.

The Marxist in this country have set upon a mission to destroy our Constitution, our Faith, and our Freedom. They will tell you that this is not true, but you can see it for yourself in this cover graphic.

Look at what else is on the cover. Guns. They will tell you that they are not after your guns. Yet, what did Washington Governor Jay Inslee say recently?

Do you believe that the Liberal extremists do NOT want your guns?

How about your right to life? Or your right to decide what goes into your bodies? Do you believe they know better than you how you should live your life? They certainly believe it.

Yet, young Daniel will continue to write the drivel that the Inlander tells him to write. He will call it his job. He will deny all responsibility for you losing your freedoms when the time comes.

Yet, what will he say when his freedoms are gone as well?