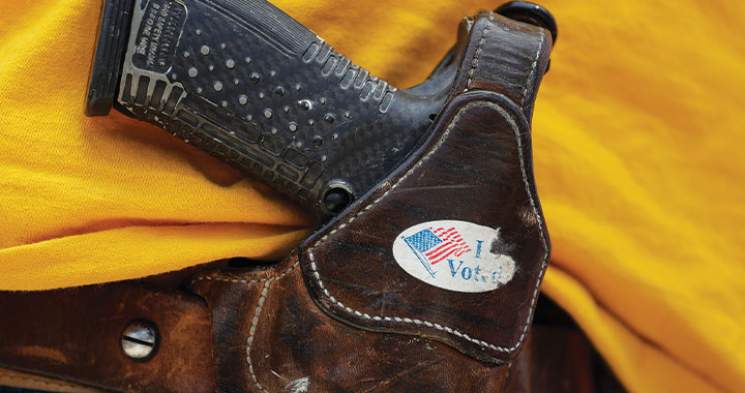 Red flag laws are supposedly implemented to take guns away from mentally disturbed gun owners, but they are based in fallacy and represent real losses of rights.

Proposals for the enactment of “red flag” laws, or “extreme risk protection orders,” as some call them, are at the top of the current list of demands by “progressives.” But two glaring fallacies underlie those proposals. One is that firearms are inherently evil, as are their owners, and catalysts for violence; while the other is the claim that such laws will not be misadministered and lead to endangering other rights.

Proposed red flag laws would allow police to violate both one’s Second Amendment rights and the rights of due process by confiscating one’s firearms based on a claim that the gun owner is unbalanced or prone to violence. The working details vary among the various state and federal versions, but their results are the same. One’s constitutional rights may be clipped on the mere fantasy allegation of anyone from an angry wife to a snooping do-gooder, thereby initiating a sequence of events that could lead, and already has led, to the deaths of police officers and gun owners.

The danger becomes all the more likely when a medical professional such as a psychiatrist claims a gun owner has gone off the rails. But is a psychiatrist’s claim truly an indication of real danger? Most people would likely believe it is. But tests of that belief conducted by Stanford University professor of psychiatry David Rosenhan and others in a landmark 1973 study indicate such an opinion is far from a slam-dunk fact. Rosenhan had sane people fake hallucinations in order to test the widely held belief that psychiatrists could reliably tell a truly mentally ill person from one who is not. The results showed “psychiatrists cannot reliably tell the difference between people who are sane and those who are insane.”

Though Rosenhan received much pushback from the psychiatric community, the essence of his conclusion was found as far back as 1887 by investigative journalist Nellie Bly. She successfully faked symptoms of mental illness to gain access to a lunatic asylum in order to expose its inhumane conditions. At the very least, Bly’s fakery and Rosenhan’s study bring into question the legitimacy of the psychiatric opinion, an opinion to which all red flag laws I’ve seen give added weight regarding who is sane and who is dangerous. Is that warranted?

It has been my observation that psychiatrists are far from objective about gun owners. For instance, almost all mental health professionals at Johns Hopkins, where my mother was a professor of epidemiology and public health, openly viewed gun ownership as a dangerous compensation for things like low self-esteem or sexual inadequacy. That bias, I noticed, often masked an elitist desire to restructure and control society to their liking and was expressed as objective fact in the famous 1960s study chaired by former Hopkins president Milton Eisenhower.

His National Commission on the Causes and Prevention of Violence study recommended that private handgun ownership be banned. But the bias behind that and other recommendations was stripped away in a later study by the Carter administration that was intended to confirm the Hopkins findings and provide a launch pad for draconian gun laws. It didn’t. Carter researchers found the Hopkins study was “results oriented” and intentionally constructed to come to the conclusions it did. The surprise Carter conclusion, which was shoved under the proverbial publicity rug, stated: “It is commonly hypothesized that much criminal violence, especially homicide, occurs simply because firearms are readily at hand and, thus, that much homicide would not occur were firearms generally less available. There is no persuasive evidence that supports this view.” The lead researcher then delivered what remains the coup de grâce most have never heard: “A compelling case for gun control cannot be made.”

That should have pushed the red flag law idea over the precipice, but it didn’t. Gun-control activists keep making up “truths” that reflect their own irrational biases, without any regard to the likelihood that their new laws would bring about a legal and constitutional slippery slope and a descent into a police state of informers and arbitrary arrests.

Red flag law proponents dismiss that scenario and buttress their dismissal with the opinions of academics such as Diablo Canyon College philosophy professor Jacob E. Van Vleet. He and other elites generally maintain that the slippery slope concerns are fallacies “precisely because we can never know if a whole series of events and/or a certain result is determined to follow one event or action in particular. Usually, but not always, the slippery slope argument is used as a fear tactic.” Maybe so, but that’s a rhetorical cop-out, for there is an overriding reality about the type of constitutional-rights-busting power implicit in red flag laws that was stated by English Baron John Emerich Edward Dalberg-Acton: “Power tends to corrupt, and absolute power corrupts absolutely.”

That does not mean America would necessarily slide into an East German-style Stasi police state overnight. It might take a while. “There is no ‘slippery slope’ toward loss of liberties, only a long staircase where each step downward must be first tolerated by the American people and their leaders,” former U.S. Senator Alan Simpson of Wyoming has said. But “once the down staircase is set in place, the temptation to take each next step will be irresistible,’ noted former New York Times columnist William Safire. The late U.S. Supreme Court Justice William O. Douglas understood:

As nightfall does not come all at once, neither does oppression. In both instances, there is a twilight when everything remains seemingly unchanged. And it is in such twilight that we all must be most aware of change in the air — however slight — lest we become unwitting victims of the darkness.

And victims we will be.

The urge to destroy our Second Amendment will require that other rights against abusive government, such as search-and-seizure protections, will have to be weakened as well. As the Sir Thomas More character in the movie A Man For All Seasons asked a zealot who wanted to knock down all the laws of England to find the devil, “Do you really think you could stand upright in the winds that would blow then — the laws all being flat?”

Wake up and smell the sulfur.

Dan Gifford is a national Emmy-winning, Oscar-nominated film producer and former reporter for CNN, The MacNeil/Lehrer NewsHour, and ABC News. His films include the 1997 documentary Waco: Rules of Engagement.