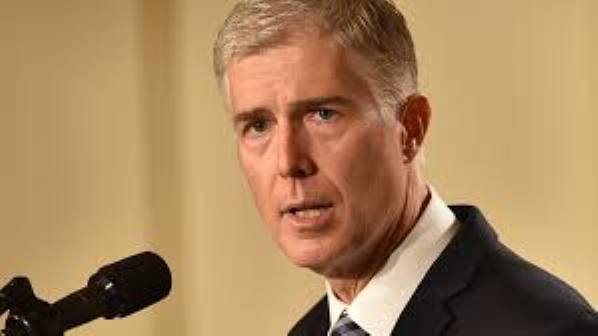 One of the things that ought to offend every American who loves the Constitution is the alarming tendency of lowly district courts to issue nationwide injunctions. This is appalling.

District courts by definition have legal authority in their districts and nowhere else. They may issue an injunction that they intend to apply to the entire country, but such edicts have no authority – zero, zip, zilch, nada – beyond the perimeters of their own district.

In Gorsuch’s concurring opinion to Monday’s order overturning the lower court injunctions, he said the court at some point needs to “confront” the “real problem” of nationwide injunctions, something Clarence Thomas has been talking about since 2018.

Gorsuch pointedly rejected the increasingly common practice of federal court judges ordering injunctions of “nationwide,” “universal,” or “cosmic” scope, which is way beyond the limits outlined for them in Article III of the Constitution. Finally, justices on the Supreme Court are starting to take notice of these judicial abuses, and are beginning the process of reeling in these renegade judges who have been allowed to punch above their weight for far too long.

Our legal history can be divided into two eras: BT (before Trump) and AT (after Trump). District judges driven by pure hatred of the president have been trying to tell the president how to do his business in matters which are far beyond their purview.

Before Trump, nationwide injunctions from district court judges, which occupy the very lowest rung on the federal judicial ladder, were few and far between. In fact, according to former Attorney General Jeff Sessions, scholars have not found one single, solitary example of judges issuing nationwide injunctions in the first 175 years of the Republic.

Once the glass was broken, however, hubristic, low-level judges started grabbing the axe and hacking up any Trump policy they didn’t like, particularly in the area of immigration.

The president faced 25 injunctions in his first two years in office, and by last September that total had mushroomed to 40. For comparison, an average of 1.5 nationwide injunctions were issued against Presidents Reagan, Clinton, and George W. Bush. Under Barack Obama, the average crept up to 2.5.

Then the Pre-Cambrian explosion occurred, due quite simply to regressive judges with an antipathy toward an unconventional president. (They call themselves “progressives,” but I refer to them as “regressives,” since they want to drag us backward in time toward tyranny.)

Despite the fact that the president has virtually unchallenged authority to direct our nation’s immigration policies, and despite the fact that district judges have precisely no constitutional authority in that area, they suddenly and dramatically fell prey to the conceit that they had some business directing a function of government that the Constitution places squarely in the hands of Congress and the President.

Article III of the Constitution refers to these lowly courts as “inferior courts,” and thus they have proven to be. But the free ride they have enjoyed, due to the abject compliance of the appeals courts and the Supreme Court, looks like it’s about to come to an end.

Justice Neil Gorsuch issued a “sharp critique” of this very bad judicial habit in connection with two Supreme Court opinions that lifted nationwide injunctions that had blocked the Trump administration from implementing its “public charge” policy that restricts new immigrants from receiving a green card if the immigrant in question is likely to become primarily dependent on taxpayer-funded government welfare programs.

Five district courts colored outside the lines and issued nationwide injunctions to block the public charge policy, including courts in southern New York, northern California, eastern Washington, Maryland, and northern Illinois. This judicial virus was spreading faster than the coronavirus until the Supreme Court and Gorsuch stepped in.

American immigration policy has always been set against admitting immigrants who did not have a job or a sponsor who would accept responsibility for their welfare, so that they did not get dumped on the public. Those days are in the distant rear view mirror, as today 51% of immigrant-led households consume welfare benefits, including medical care, food stamps, and housing assistance. If these immigrant households include children, the number spikes to 76%. The number should be zero percent. (In comparison, 30% of native-led households are on welfare.)

A 2017 study by the Federation for American Immigration Reform found that illegal aliens consume more than $100 billion a year in welfare subsidies, a figure which does not include the cost of securing the border. In total, immigrant-headed households, both legal and illegal – receive welfare at a rate 41% higher than native households. Clearly, the “public charge” issue is a matter of genuine concern.

The role of courts under the Founders’ Constitution is to redress injuries sustained by a particular plaintiff. The problem is that inferior courts are issuing opinions that affect parties that are not a part of the case before the court. This globalizing of their authority is particularly offensive, since if they stick to their business of dealing with individual plaintiffs a bad ruling is at least limited in its pernicious scope.

Gorsuch outlined the problem. The current practice encourages “forum shopping,” in which disgruntled anti-Trumpers file in courts that are known to be hostile to the president.

“If a single successful challenge is enough to stay the challenged rule across the country, the government’s hope of implementing any new policy could face the long odds of a straight sweep, parlaying a 94- to-0 win in the district courts into a 12-to-0 victory in the courts of appeal,” said Gorsuch. “A single loss and the policy goes on ice – possibly for good, or just as possibly for some indeterminate period of time until another court jumps in to grant a stay.”

What Gorsuch is saying is simple. The Founders’ Constitution is just fine the way it is, and it’s time for us to apply the Constitution rather than rewrite it, as lower courts are trying to do.

President Trump’s appointees to the federal bench, especially the Supreme Court, are transforming the judiciary, moving it away from reinterpreting the Constitution and toward applying it as the Founders gave it to us. It’s about time.