Republican Tennessee State Rep. Micah Van Huss filed a bill Wednesday in the state’s General Assembly that would explicitly label media outlets The Washington Post and CNN as “fake news” and condemn them for “denigrating our citizens.”

“A RESOLUTION to recognize CNN and The Washington Post as fake news and condemn them for denigrating our citizens,” the bill’s summary reads.

“I’ve filed HJR 779 on behalf of a constituency that’s tired of fake news and Republicans who don’t fight,” Van Huss wrote on his Facebook page. 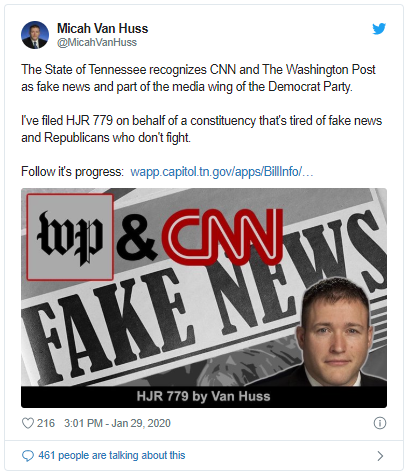 The bill’s text cites several instances where The Washington Post and CNN have drawn a “line between Trump opponents and Trump supporters” by asserting without evidence or definition that Trump’s supporters are “cultists,” such as when a CNN guest “suggested that Trump supporters belong to a cult and that our president is using mind control.”

The State of Tennessee recognizes CNN and The Washington Post as fake news and part of the media wing of the Democrat Party.

I’ve filed HJR 779 on behalf of a constituency that’s tired of fake news and Republicans who don’t fight.

Since the “cult diagnosis draws a line between Trump opponents and Trump supporters” and “oversimplifies the way people think and feel about their own beliefs and those on the other side of that line,” the bill reasons, the media outlets should be recognized by the State of Tennessee as “fake news and part of the media wing of the Democratic Party.” (RELATED: Chris Cuomo Says Greta Thunberg Is Off Limits Because She’s A ‘Kid.’ Twitter Users Recall Some Recent CNN History)

“BE IT FURTHER RESOLVED, that we condemn them for denigrating our citizens and implying that they are weak-minded followers instead of people exercising their rights that our veterans paid for with their blood,” it concludes.

A former Marine who served in both Iraq and Afghanistan, Van Huss has represented Tennessee’s 6th district in the state’s legislature since 2013.

“I remember when the news was informative and honest,” Van Huss told the Daily Caller, explaining that he filed the bill on behalf of his constituents. “CNN continues to divide this country in an era of significant political polarization.”

The Tennessee lawmaker said his fellow Republicans have seemed “excited” about the bill, although it’s too early to gauge its prospects for passage. “I have not received any negative feedback,” he said.