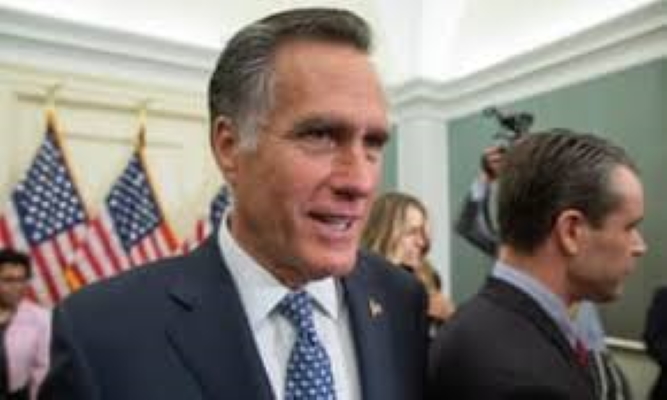 Republicans feigned concern about the President’s phone call to Ukraine

By now, we have all heard about Sen. Chuck Schumer looking for Republicans willing to go along with the Democrat’s impeachment scam. Democrats are still trying to overturn the results of the 2016 election, and all Americans should be concerned because the impeachment scam has set a dangerous precedent. It opened the door for corrupt politicians to overthrow future presidents through phony congressional kangaroo courts.

Moreover, all Americans should be outraged because the charges are completely false, and we have no idea how many Republicans (Never Trumpers) are willing to go along with the scam for personal gain or satisfaction. It’s disheartening just knowing that some Republicans feigned concern about the President’s phone call to Ukraine after the transcript of the call was released to the public.

However, that didn’t stop some Republicans from siding with Democrats over the phone call. I call them ‘Romneycrats’. What’s a Romneycrat?  It’s a person who, regardless of political affiliation, will take the other side if it harms a rival. Romneycrats will usually go along with the side that benefits them personally, even if they know it’s the wrong side.

Right and wrong aren’t usually factors in a Romneycrat’s decisions, and most of them are known as flip floppers because they usually go along with whatever they think is popular at the time. In fact, most of them, like their Democrat counterparts, do not abide by a set of moral principles. They see nothing wrong with telling lies, making false accusations or persecuting an opponent.

In addition, they usually take the side of the projected winner in a confrontation, regardless of their own public position. In other words, they are hypocrites. That means we can’t believe anything they say. They are subject to switch sides on us when we need them most. I can name dozens of politicians who switched sides in order to harm a political rival. Think about the politicians who based their election campaign on repealing Obamacare and then refused to vote for repeal after being reelected just because the President supported repeal.

The representatives who flip flopped on repealing Obamacare made it known that they refused to vote for repeal because the President supported it. They didn’t care if repealing Obamacare benefited people. They only cared about opposing a political rival. In my personal opinion, Republicans never intended to repeal Obamacare. They just used it to get reelected.

In addition, conservatives see the Republican party as weak and timid because too many of them are Republican In Name Only (RINO). Romeycrats are RINOs, and they will never rock the boat or stand up for what’s right, unless they benefit from it or it furthers global communism. They can’t be depended upon to stand up for what’s right unless the alternative harms them personally.

And, I’m sorry to say that Congress is full of politicians that are willing to allow false testimony (false evidence) to be used in order to convict a political rival of a crime they didn’t commit. The only thing that matters to Democrats and Romneycrats is stopping the President from advancing his goal of making America the greatest nation in history. They are willing to do despicable things to further the global communist agenda because their sworn oath of allegiance isn’t to the U.S. Constitution.

On the contrary, their allegiance is to global communism. They owe allegiance to globalist power brokers like George Soros. They are loyal to Soros and globalist organizations like the Council on Foreign Relations. Proof of this comes from the fact that Democrats and Romneycrats always come together to further the globalist agenda, and globalists are behind the drive to remove the President from office.

Furthermore, the impeachment trial should have been dropped before it started because the charges are totally false and everyone in Congress knows that. The impeachment trial is a miscarriage of justice because there was no crime, nor was there any evidence that a crime had been committed. The real reason Democrats want the President thrown out of office is because he’s a nationalist and opposes global communism. He’s a real American patriot, and they hate him as much as they hate America.

Finally, it appears that Sen. Schumer found enough Romneycrats to move the globalist agenda forward because the Democrat’s impeachment scam was taken up in the Senate. That should scare all patriotic Americans because the impeachment scam opens the door for future patriotic presidents to be thrown out of office by corrupt globalist politicians, and that endangers America’s independence as a nation. A nation can’t remain independent when corrupt, globalist representatives have the power to depose patriotic leaders. Every American should be calling and emailing their representatives demanding that they acquit the President of the crimes he has been falsely accused of.