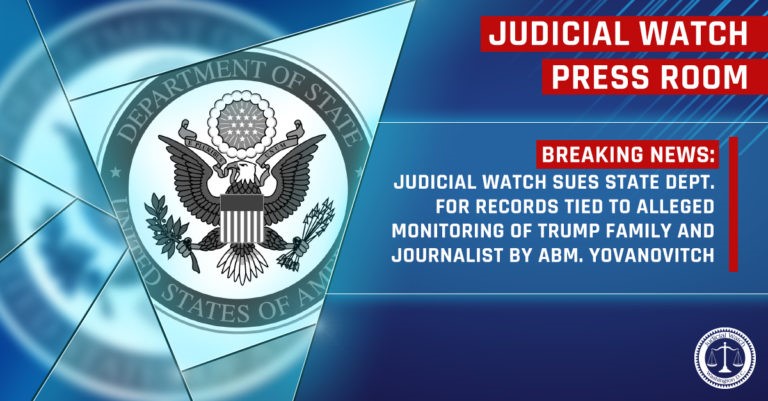 In October 2019, Judicial Watch began its investigation into the alleged monitoring, via CrowdTangle and other means, of journalists and persons linked to President Trump. Ambassador Marie Yovanovitch is alleged to have ordered State Department entities to conduct the monitoring. The list of the alleged targets includes:

Prior to being recalled as ambassador to Ukraine in the spring Yovanovitch reportedly created a list of individuals who were to be monitored via social media and other means.  Ukraine embassy staff made the request to the Washington D.C. headquarters office of the department’s Bureau of European and Eurasian Affairs. After several days, Yovanovitch’s staff was informed that the request was illegal and the monitoring either ceased or was concealed via the State Department Global Engagement Center, which has looser restrictions on collecting information.

“This is not an obscure rule, everyone in public diplomacy or public affairs knows they can’t make lists and monitor U.S. citizens unless there is a major national security reason,” according to a senior State Department official. If the illicit operation occurred, it seems to indicate a clear political bias against the president and his supporters. Yovanovitch, a career diplomat who has also led American embassies in Kyrgyzstan and Armenia, was appointed ambassador to Ukraine by Obama in 2016. She was recalled by the State Department in May and remains a State Department employee in Washington D.C.

The two Judicial Watch FOIA lawsuits were filed after the State Department failed to respond to October 9 and October 23, 2019, requests for documents about both “the monitoring of any U.S.-based journalist, reporter, or media commentator by any employee or office of the Department of State.” and the CrowdTangle social media monitoring program.

On October 10, 2019, Congressman Devin Nunes told Sean Hannity on his program that, “What I’ve heard is that there were strange requests, irregular requests to monitor not just one journalist, but multiple journalists…” Hannity followed this statement by adding, multiple sources also told him that they, “believe there is evidence that government resources were used to monitor communications” of U.S. journalists and that Yovanovitch may have been involved. Yovanovitch was questioned on the issue during the impeachment proceeding in the House and seemed to deny any illegal monitoring took place.

Q: Could you help us understand how the embassy and the State Department back in Washington collects information on social media?

A: I can’t really answer the question, because I don’t know all the inner details of how the press section works to gather information. But they provide us with a press summary, or they used to provide me, I mean. They provide the embassy with a press summary and it goes out to other people at the State Department as well.

Q: And is part of that monitoring social media accounts from …

A: Yeah. I mean, in today’s age, yeah, social media is really important.

“Was the Ukraine Embassy illegally monitoring American critics of Ambassador Yovanovitch?” stated Judicial Watch President Tom Fitton. “It is disturbing that the State Department stonewalled Judicial Watch’s requests for information on this controversy until after the impeachment of President Trump.”

Also in November 2019, Judicial Watch filed a lawsuit against the State Department seeking documents related to a reported “untouchables list” given in late 2016 by Yovanovitch to Ukraine Prosecutor General Yuriy Lutsenko. Lutsenko told The New York Times that Yovanovitch “pressed him not to prosecute anti-corruption activists.” Lutsenko reportedly said earlier the do-not-prosecute list included a founder of the Ukraine group Anti-Corruption Action Centre (AntAC), which was funded by Soros foundations and the U.S. federal government, and two members of the Ukrainian Parliament who vocally supported the Soros group’s agenda.