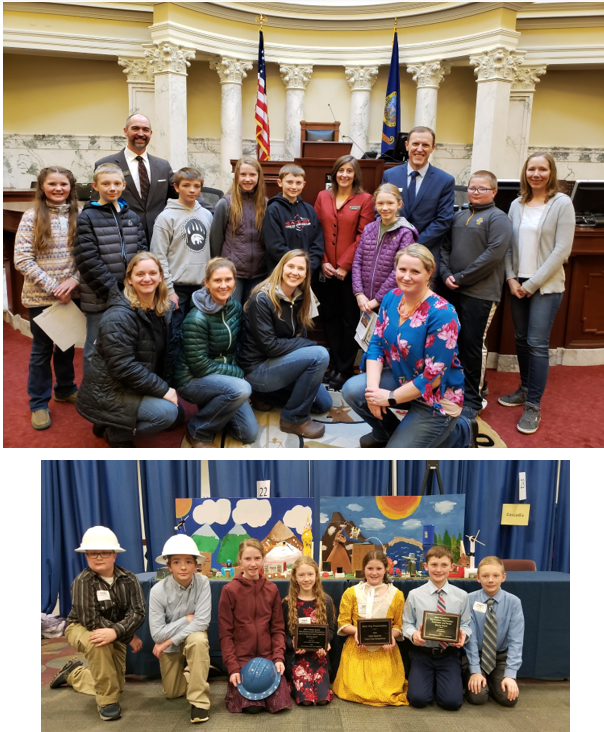 We have just finished our third week of the Idaho legislative session. I have spent the majority of my time reviewing proposed rules, working on legislation and discussing bill language with bill drafters, citizens, legislators and agencies. It was great to have an energetic group of students from Bonner County visit the capitol last week. They are finalists in a building Future Cities competition and won three awards! As things are really moving swiftly in the legislature, here are a few of the notable things that are occurring:

Please call the executive branch with concerns on these three issues and educate your legislators on your specific concerns.

Refugees: The Trump administration released Executive Order #13888 on September 26, 2019, titled “Enhancing State and Local Involvement in Refugee Resettlement” The intent of this order was to “resettle refugees only in those jurisdictions in which both the State and local governments have consented to receive refugees under the Department of State’s Reception and Placement Program (Program).” The feds want to cooperate and consult with State and local governments, take into account the preferences of State governments, and to provide a pathway for refugees to become self-sufficient.”

This order offered each state the opportunity end bringing refugee into their state. I have had many emails and phone calls from angry Idaho citizens concerning the governor’s behind-the-scenes decision to support more refugees into Idaho with little input from citizens. Currently the governor is supporting bringing more refugees into Twin Falls and Ada counties. If you don’t like this decision, I urge you to call his office and make your opinions known.

Red Tape: Many citizens have grumbled about the lack of real progress the executive branch has made in reducing red tape in Idaho government. This has been promoted as a great accomplishment, but to date it is not clear at all what actual reductions have occurred for the citizens. Consolidating and deleted obsolete codes does not reduce regulations on the average hardworking citizen. Time will tell if this promise will show any fruition in 2020.

Reducing state codes by inserting federal codes should not be counted as an acceptable form of red tape reduction. Why? Because once inserted, State legislators will not be able to change federal code and thus we are stuck with the cumbersome federal codes. In my Environment Energy and Technology committee, Idaho DEQ appeared to just remove pages of state law and replace it with links to federal laws. While it reduced the number of pages from the state code, it created an even more cumbersome quagmire. If you click on the links, you are led to hundreds of pages of federal laws which the state will now be enforcing. If you have issues with water quality, air quality, environmental standards, call the executive branch now, not your state legislators. This is happening in many other areas such as agriculture, transportation, healthcare and education. Pretty soon, the Idaho executive bureaucrats will merely be extensions of the federal machine if this practice isn’t stopped soon.

Grocery Tax: Some citizens remember campaign promises to remove the grocery tax before elected and now are discouraged that promises seem to be forgotten. Heading into the second year of a new governor, comments have shifted from removal of tax, to reform of the tax, to more credits and no removal. It appears that some in the legislature may heed to these wishes and we might go another year without a grocery tax repeal. 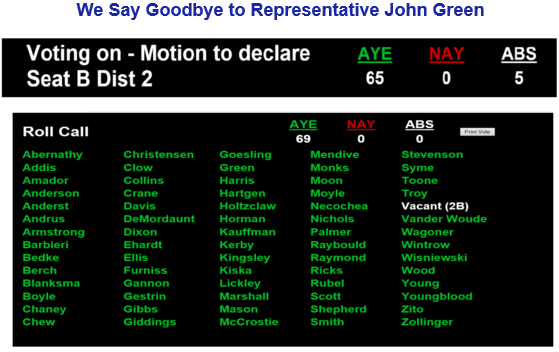 In their typical fashion, almost every news agency reporting on Rep. John Green got it wrong. This was likely an attempt to create headlines to sell papers and dupe more readers. Fake news reported that the Idaho House expelled a member. This is untrue. Expulsion is a punitive process. The House took a vote to “declare the seat vacant.” According to Article 6, Section 3 of the Idaho State Constitution and Idaho Statute 59-901 “the seat was vacant upon the happening of… the conviction of an incumbent officeholder of any felony.” The motion we made was merely affirmation of the fact that the office had already become vacant as the House had no authority to expel a person who is no longer in office.  But that might not have been as juicy of a headline.  I will miss John as he was a solid conservative who helped many of us navigate through the tricky world of legal language. He voted like a true conservative and honored the Republican party platform. My hope and prayers are that he finds contentment and peace on his road ahead wherever it leads.

Update on My Bills:

Obama-Car-It is illegal to drive without insurance. It is not illegal to not have insurance on a vehicle. Last year Idaho passed legislation that says that anyone who doesn’t have insurance on a vehicle and doesn’t notify the Department of Motor Vehicles (DMV) by filling out a form, will have their registration dropped by DMV.  Reinstatement of the registration would be a $75 fee paid to the Idaho Transportation Department (ITD). I believe this legislation targets citizens who are not breaking the law. Many citizens in my district are snowbirds who don’t drive certain vehicles in the winter months, or swap their coverage on various vehicle depending on which one is seasonally needed. The real problem isn’t the responsible citizens, but the ones who decide to knowingly drive without insurance. Driving is a privilege and we all share the responsibility of doing it safely. Anyone who has been hit by an uninsured driver knows the pain of paying for the other driver’s irresponsibility. I have been working overtime with many others to find a fix to this problem legislation. A proposed bill should be released in the next few weeks that will hopefully work for all. Please contact your legislator and ask them to support this revised legislation.

Pre-emption-I have been working with Representative Christy Zito and the Idaho Second Amendment Alliance on a bill to stop localities from infringing on our second amendment rights. We are still working through the best language for the bill. 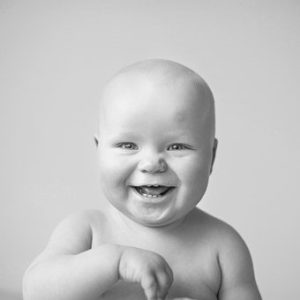 Abortion Human Rights Act (AHRA)-HB361: Only two counties in Idaho perform abortions. 38 babies a week are murdered in Twin Falls and Ada counties. The AHRA would end this practice completely and has been filed as a personal bill. After several discussions with the Committee Chairman, we believe much more education is needed for legislators. Remember, federal court opinions have been telling citizens and lawmakers for 50 years that murdering babies is ok, as long as the mother and her doctor are doing it.  Many state legislators believe in judicial supremacy over state sovereignty. Established Boise-based “pro-life groups” who regularly lobbying at the capital do not support our bill to completely end abortion and are actively working to undermine it. Much education is needed for the leaders of these groups and I would encourage you to make sure you are supporting a group that is working to end all abortion in Idaho and not give you lip service while their hand is out. The division between various pro-life lobby groups is hurting efforts to make abortion truly illegal in our state.

Three CPS Bills: Last year I ran a bill to have CPS workers notify parents of their rights when they initially contacted a parent to investigate any issue. The Idaho Department of Health and Welfare (IDHW) fought tooth and nail to stop my bill, but must have had a change of heart. This summer they created their own pamphlet to notify parents of their rights and their complex investigation assessments. In response, citizens have set up a new website to let parents know what their rights are before the knock on the door comes (LINK to cps website). I would encourage you to share this website with anyone you know who has children, especially if they are home schooled. This year I have three more ideas to help reform this leviathan of a system. I will keep you posted on the progress.  On Friday I met with the IDHW Welfare Director, Dave Jeppesen to share my bills. Director Jeppesen is committed to improving the department and is reviewing the bills with his staff. I have hope for more reform in this agency with his committed leadership.

Bond Election and Election Cycles: I will present HB 347 on Monday that says if a bond fails at an election, it cannot be put back on the ballot for 11 months. I am also working with another legislator to limit school bond and levy elections to two times a year instead of four!

Idaho Fish and Game Disabled Tags and Fees: I am working on a bill to allow a discount on hunting tags and licenses for all types of legally confirmed disabled citizens.

I will continue to expose wasteful spending. Idaho state government currently spends approximately $ 5 million dollars a year for various club and organization memberships and dues and subscription for various agency employees. Some of these dues are over $100,000/year to be a member!  Many of these “non-profits” do not have “the Idaho way” on the top of their lists and are deeply connected with the deep state in Washington DC. They are large lobby organizations that push their national or global agendas in our state and on our state employees. I have brought this list of 700-line items to the attention of the Governor’s office, the Lieutenant Governor, the Speaker of the House, and House and Senate members. Please educate yourself on this issue and let your legislative, judicial and executive elected officials know if you think this type of spending is inappropriate.

Biased media outlets are collaborating in an organized effort to silence the ideas of those they do not agree with. While they continually try to label and discredit me, there are many others across the country that this is happening to. Here is a link to my recent public statement on this issue in an attempt to counter their narrative and explain why they are doing what they do. It would be helpful if you read the statement and watched the video link in it. When you understand the “why”, all their narratives will start to make sense. Remember, facts are your best friend when it comes to correcting the “parrots” who repeat misinformation they see on TV or read in regional biased newspapers.

Together with your help, I hope to make Idaho government and politics an arena for ALL ideas and beliefs to be discussed in the open civilly. We can disagree but let us never try to suppress the ideas and beliefs of others and deprive them of their unalienable right to freedom of thoughts and beliefs. Here is a link to an in-depth video on the political weaponization of words and a whitepaper presented to Congress on the topic. 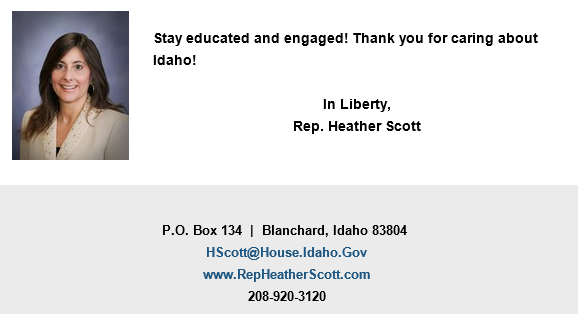