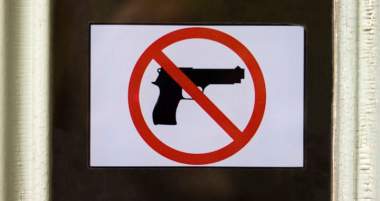 Following the third shooting in Seattle in as many days, Mayor Jenny Durkan said on Thursday, “We will not allow this to be the new normal. We know gun violence is preventable and are taking urgent action.”

A similar statement was issued by Representative Democrat Pramila Jayapal, who pointed to the need for stronger gun control.

The shooting Wednesday night in front of a McDonald’s located in Seattle’s high-crime area was gang-related. One of the three thugs was wounded, while the other two bolted but were later apprehended by police. Seven bystanders caught in the crossfire following an argument were either killed or wounded.

The thug who was wounded, 21-year-old Jamel Jackson, was booked into jail for unlawful possession of a firearm following being treated at a local hospital. The other two who bolted from the scene were captured shortly afterwards. Between the three of them, they have a history of more than 65 arrests for numerous felonies and misdemeanors and yet, despite Seattle’s strict gun controls, they were able to obtain the firearms they used in the gang war.

Police Chief Carmen Best said the shooting was “not a random incident. There were multiple people involved. There was a dispute that happened in front of the McDonald’s, people pulled out their guns, shots rang out [and] people ran in all directions.”

The Seattle Times’ editorial following the shootout blamed local politicians for ignoring the real problem while threatening to strengthen the city’s already toxic infringements of the Second Amendment on law-abiding citizens:

A chorus of progressive politicians responded to Wednesday’s shooting by calling for stricter gun-control laws … but there are already strict laws against felons having guns.

In this case, blaming guns sidesteps hard questions about why the city isn’t better protecting people from known dangers of the drug epidemic and related crimes. Mayor Jenny Durkan said gangs are involved, but gangs are primary traffickers of illegal drugs.

“The fact that a gun was involved here … isn’t the principal issue,” said Scott Lindsay, a former mayoral police adviser. “The principal issue is an out-of-control drug market the city has just not been able to take care of for 30 years.”

The editorial ended by demanding that “there should be clear and significant consequences for criminal behavior. Addicts and the public at large aren’t helped by the current system’s leniency.”

The State of Washington already boasts some of the most egregious infringements against law-abiding gun owners’ rights, including a law that requires an individual to be 21 before being able to purchase a semi-automatic rifle and show proof that he has completed a “recognized” firearm safety course. Retail gun dealers must record and report all retail sales of handguns to the local police or sheriff department. The state also has in place the unconstitutional red flag law and prohibits the private transfer of a firearm between consenting individuals. Instead the transfer must be conducted through a licensed gun dealer who must conduct a background check on each individual and keep a record of the sale for the ATF. And the state has banned the sale of so-called bump stocks.

The state has a preemption law prohibiting Seattle from enacting even more draconian gun laws, but the city has managed to push the edge of that envelope. It has passed tax levies on the purchase and sale of firearms and ammunition and requires all gun owners to keep their firearms locked up when they aren’t being carried, whether in their vehicles or at home. The mayor has even threatened to use local police to search residences of homeowners suspected of leaving a firearm out in the open.

It didn’t take long for the 650,000-member pro-gun organization Citizens Committee for the Right to Keep and Bear Arms (CCRKBA) to unleash an attack on politicians over the shooting Wednesday night:

“In 2014,” recalled CCRKBA Chairman Alan Gottlieb, “we opposed Initiative 594 with its so-called ‘universal background checks’ and warned that it would not prevent bad guys from getting guns. A year later, we warned the City of Seattle that adopting a tax on firearms and ammunition would create a false sense of accomplishment, but wouldn’t prevent violent crime, and Wednesday night proved us right on both counts.”

One woman is dead and seven other people were injured in the horrific incident. Police have identified two suspects, both with extensive backgrounds that include arrests and convictions, according to published reports. There were reportedly outstanding warrants on both suspects at the time of the shooting. They are considered armed and dangerous, according to Seattle Police.

“Yet,” Gottlieb observed, “here we are, making national news for a terrible incident that these gun control laws were supposed to prevent. And what’s happening right now in the state legislature? Seattle-area lawmakers are busy pushing even more gun control proposals that will only impact honest citizens and do nothing to stop criminals who misuse firearms.”

“It’s being reported both suspects have extensive records with multiple arrests and convictions,” he added. “Instead of complaining about guns on the street, why aren’t officials in Seattle and Olympia working to keep people like these two suspects off the street? One of these guys reportedly has at least 44 arrests and 20 convictions, and the other has at least 21 arrests and 15 convictions. That’s just outrageous!”

What’s particularly outrageous is the automatic knee-jerk reactionary response by anti-gun politicians to such shootings, seeking to wreak further vengeance on law-abiding gun owners who had nothing to do with the continuing drug-related gang wars that left people dead and wounded in downtown Seattle Wednesday night.