In the recent 9th Circuit Court of Appeals, Columbia Riverkeeper V. Wheeler case, the 12-20-2019 decision is being touted by the print media and non-government organizations (NGO) as a decision that will require dam removal on the Snake and Columbia Rivers, contending that water in the dams during upstream migration of Salmon is too warm when the fish are returning to the spawning grounds. 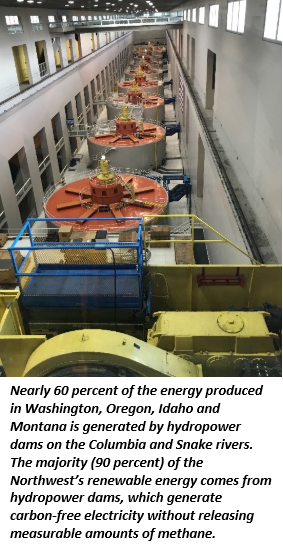 The press incorrectly reported the issue, the decision does not remove the dams.  The court decision directs the Environmental Protection Agency (EPA) to complete a Clean Water Act (CWA) requirement that both Washington and Oregon have failed or refused to develop.  This is a standard and required report on pollution in water.  As neither state produced the report the court has directed the EPA to complete a report on pollution within the Columbia and Snake Rivers.  This standard report is entitled “Total Maximum Daily Load” (TMDL).  Water temperature is considered and identified as a physical pollutant under the CWA.

The apparent pretense of this suit is establishing that water in both the Snake and Columbia River dams is too warm by EPA standards for Salmon survival (68F+).  The intent is to lay the legal background for future court action after the TMDLs are complete and to ensure water temperatures are cooled enough to allow salmon survival and passage through the dams to reach the spawning grounds.

Unfortunately, the presiding fact is that the Plaintiff’s “intent” is not only prevented by atmospheric and natural upstream conditions, it is a physical impossibility to cool the water in these rivers.  Dam removal cannot resolve the water temperatures in these rivers.

The temperature problem is not new, it is an environmental and a natural atmospheric condition.  Data supporting this opinion is acquired from U.S. Geographical Survey (USGS), the authoritative source for river data in the United States.  This site will also identify the flow of any U.S. river, temperature, and in most cases the pollutant content of any river presently monitored.  Historical data is available upon request. 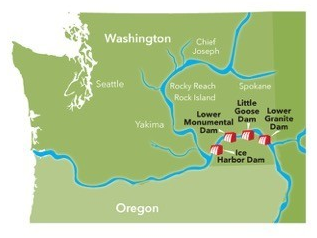 USGS monitors site conditions on the Snake and Salmon Rivers.  These rivers provide the water that fill the dams being targeted for removal, the Ice Harbor, Little Goose, Lower Granite, and Lower Monumental Dams.  These USGS sites have continuously recorded water temperatures in these rivers up to and exceeding 23.9C (75F) during the warm months when spawning is occurring.

Water at this temperature is deadly for Sockeye Salmon.  Approximately 97 miles of lake or slack water lie in the dam reservoirs which are filled with the naturally preheated water from the Snake and Salmon rivers. Temperatures this high are proven hazardous and deadly to Sockeye salmon.  Warm water fish thrive in such temperatures.

Unfortunately removing the dams cannot cool the water in the rivers.  NGO objectives for removing these dams for cooling water has no validity, as the water temperature will remain at those levels even if the dams are removed.  The only advantage of removal is it would provide a flowing body of water which would keep the fish oriented, with the downside that it would devastate agriculture, barging, and warm water recreation in this area.

What are the natural and actual conditions of the Snake and Salmon River?

The following records establish the recorded natural water temperatures in the rivers above the dams.  Historically, temperatures exceed 15.56C (70F) during the spawning periods.   Under the CWA, the EPA has arbitrarily established an unsupportable and unattainable temperature for Cold Water Salmonid Spawning (CWSS) of 13.5C (56.3F) in all the rivers, including some irrigation conduits in the Boise River Valley.  Such temperatures are not supportable or attained other than in the headwaters at river elevations exceeding 6,500 feet in the Stanley Basin of Idaho.  Not even at the historically touted Red Fish Lake spawning ground for the Salmon River Sockeye can attain that temperature.  It has been recorded as averaging 17.8C (64F) during spawning.

To establish the data and clarify the physical impossibility of cooling the river and dam water, two recording sites operated by USGS, and located upstream from the questioned Snake River Dams, clearly record the temperatures in the natural flowing river channels during the spawning season exceed 21C (70F).

The second selected site is located on the Salmon River at White Bird, Idaho.  This USGS site was selected to exhibit the historical water temperatures during the spawning season at 23C (75F) recorded in this section of the free-flowing Salmon River prior to the confluence with the Snake River and upstream of any dams.

“When temperatures get above 68 degrees, salmon have problems”, according to Dennis McLerran, an attorney with Cascadia Law Group, who is a former regional administrator for the EPA in the Northwest.

The USGS monitoring sites clearly identify the temperature of the water flowing into the Snake River dams and subsequently downstream exceeds 70F during the summer months.  The water is also clearly the source of heat in the reservoirs.  No amount of work or expenditure will lower the water temperature in the Snake, Salmon or Columbia Rivers to the degree the litigators and EPA desire.  This established historical data indicates that this has always been the condition, even prior to immigrant settlement, as the atmospheric temperature worldwide according to NOAA has only risen 1.4F in the last 135 years.

The question we must consider is with the effect of warmer temperatures due to Global Warming, is it practical to try to cool the rivers to meet arbitrary temperatures set by the EPA? 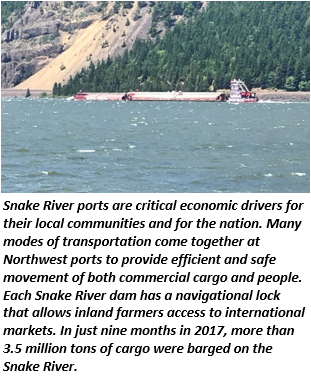 There is a solution, a solution that will keep the Columbia and Snake River economies in place, achieve the same result as removing the dams, and allow the salmon to reach their historical spawning grounds. The solution is constructing a bypass system of continuous flowing water through or around the dams similar to a canal. This can be designed with riffles and shading to effectively cool the water and simulate a natural flow.  Each segment of this artificial river should start in the flowing rivers above each dam and extend to the natural river channel below the dams. Doing this will maintain a consistent flow of running water around the dams from the spawning grounds to the ocean.  It will certainly be more economical to cool a bypass, if needed, than the entire river.  Such a by-pass system could be constructed around these four dams for around $3.4 million per mile. The 97 miles needed to bypass the slack water should cost approximately $330 million.

However, there is a caveat.  Ownership of each section of such a by-pass would have to be held in private ownership, or under their treaties the Tribes would have full fishing rights on the water.

It should also be recognized a major part of the Salmon problem is in the ocean and that both the free running Fraser and Skeena Rivers in British Columbia, without dams, were also closed to Salmon and Steelhead fishing in 2016 and 2019 due to the lack of returning fish.

It appears the EPA defendants did not present the complete and correct evidence to the 9th Circuit court and it also appears to be another ill-conceived plan to justify removing dams.

It is important to save these fish.  We must stop using outdated studies, non-supportable EPA records, or previous flawed court decisions based on incorrect data and DO THE RESEARCH.  Over $17 billion has been spent on salmon recovery efforts, what is the purpose of spending another $17 billion?