The Big Money behind Doug Okuniewicz 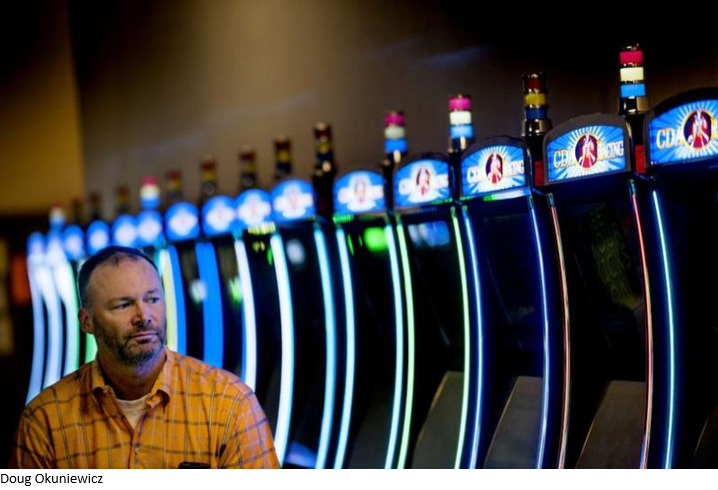 The Big Money behind Doug Okuniewicz

In this exposé, Boise Leaks reveals the power and money behind candidate Doug Okuniewicz.

From 2008 until just before he ran for the LD2 Legislative seat in 2016, Doug Okuniewicz was Chairman of Winning For Idaho. A complete summary of WFI’s contributors and expenditures from 2009 through 2018 can be found here (from www.PlatformAdherenceCommittee.org* cash tracer.)

The WFI expenditure summary reads like a Who’s Who of Idaho Legislators, including numerous contributions to Idaho Democrats. Here is a partial list of Democratic Legislators and organizations that WFI has contributed to…

Political Action Committees are often used to shield donors from direct involvement in an organization or political campaign. Donors can contribute to a PAC and enjoy some limited anonymity from politically risky campaign contributions to controversial groups or candidates. There are also numerous instances where PACs were used to defraud the public, as was the case with former State Senator, Dan Schmidt (D-Moscow.)

Dan Schmidt is the former treasurer of the Idaho Democratic Legislative Campaign Committee (IDLCC.) In 2014, the IDLCC staged a fraudulent mail campaign utilizing a fraudulent PAC called Patriot PAC in an attempt to disrupt the Republican Primary in Legislative District 5. The IDLCC funded the fraudulent effort with two donations totaling $1,266.69 to Patriot PAC. Donations from Winning For Idaho to the IDLCC in 2013 and 2014 total $2,500.

We used the Platform Adherence Committee’s Cash Tracer to find the donations, then went to the Idaho Secretary of State’s Office to pull the PDF copies of the Sunshine Reports listed below. 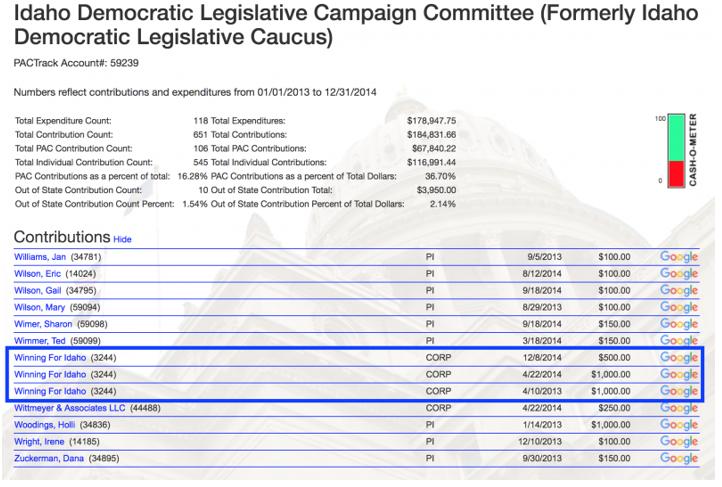 PACs are also prohibited from directly conferring with political candidates, which is presumably why Doug Okuniewicz resigned his position as Chairman of WFI in 2016.

It should be noted that the Idaho Sunshine Report must contain both the name of the political action committee and the name of the chairman. Conspicuously, Doug Okuniewicz’s name is omitted from several sunshine reports.

Coeur d’Alene Racing, LTD was established in 1987 initially as a business to operate one or more pari-mutual racing facilities in Coeur d’Alene Idaho. Paul Bryant Jr. of Alabama/Idaho, Inc. was the signing General Partner. That changed over the years to include Doug Okuniewicz as General Partner. Its secondary function is the expansion of the gambling and related industries in Idaho through political action committees and lobbying activity.

Doug Okuniewicz’s filing as a lobbyist for Coeur D’Alene Racing, LTD, can be found on page 3 of this document.

Coeur d’Alene Racing LTD, 2019 Annual Report. This document shows Alabama as the state of incorporation and that Alabama/Idaho, Inc. as the General Partner.

At the top of it all is The Greene Group. 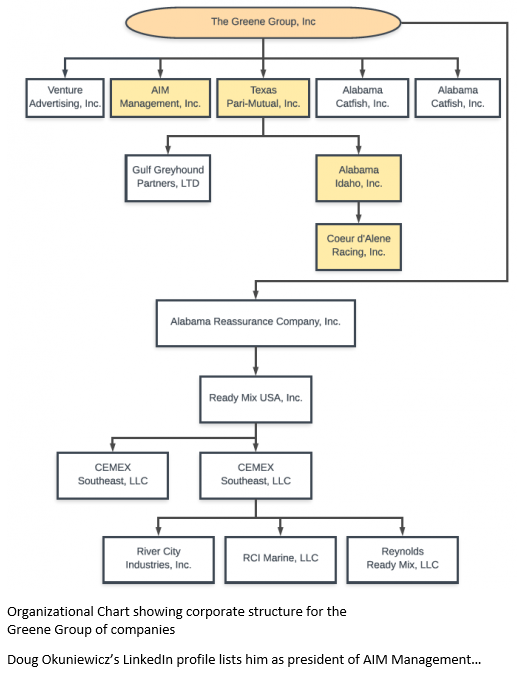 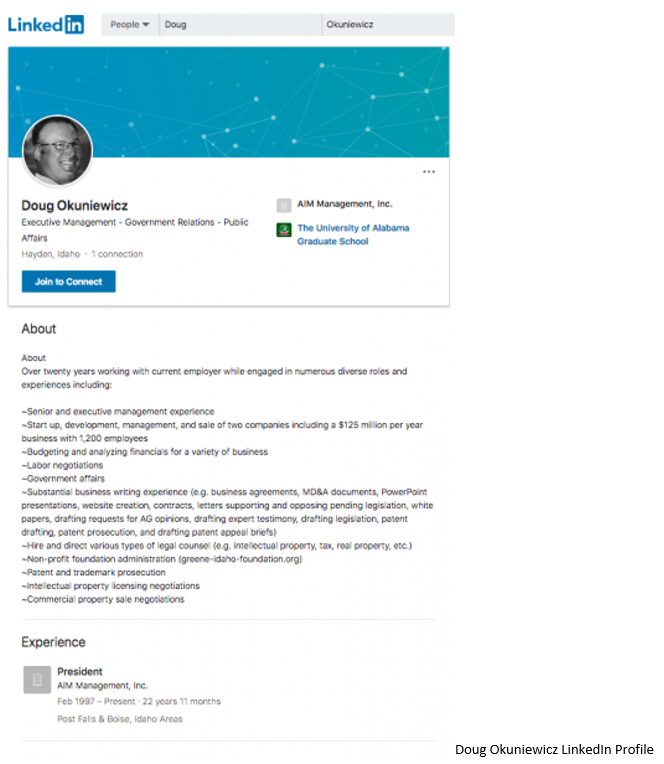 The Greene Group was the subject of an investigation by then Ada County Commissioner, Sharon Ullman.

Highlights of Commissioner Ullman’s investigation include references to a 1995 article in the Spokesman Review detailing acts of animal cruelty at the Coeur d’Alene race track, which was and is owned by The Green Group, Inc.

According to LegalSchnauser.com, another Greene Group subsidiary, Alabama Reassurance Company, Inc., “was implicated in a $15-million fraud scheme involving a Philadelphia lawyer and entrepreneur named Allen W. Stewart. Stewart was convicted in December 1997 on 135 counts of racketeering, mail and wire fraud, and money laundering.” Allen W. Stewart is named alongside Alabama Reassurance Company in a legal memorandum (see page 17) indicating that the parties “defrauded the people of Kentucky in certain arrangements in order to inflate their financial statements.”

Comments on a website which desires to end dog racing, www.grey2kusa.org, seem to indicate that one of the goals of the Greene Group may have been to secure state subsidies for dog racing and potentially other gambling enterprises, similar to the state subsidies available to the industry in other states. 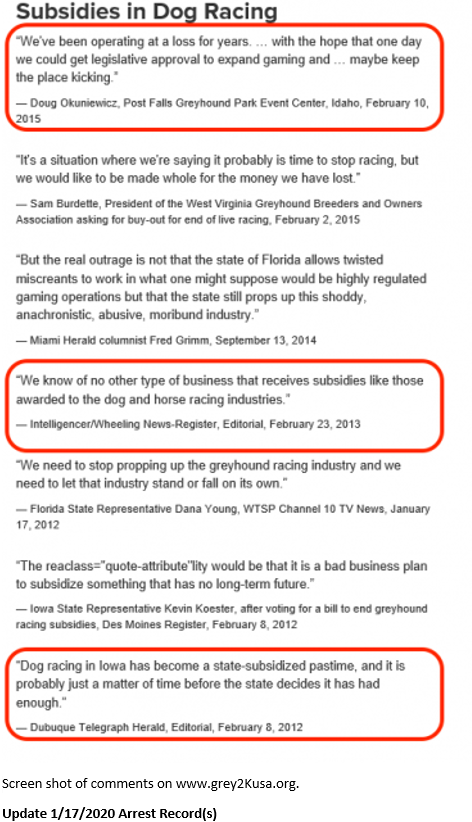 This document is a court motion to dismiss the case, filed by the City of Spokane based on a plea negotiation.

A 6/8/2019 Annual Report for JH Benefits, LLC, shows candidate and racing/gambling lobbyist, Doug Okuniewicz is currently a member of an organization managed by “current” Racing Commissioner, James C Hammond. According to the Idaho Racing Commission website, James Hammond’s term as commissioner expired as of 1/1/2019. As of this report, Governor Brad Little has not replaced Commissioner Hammond or extended his tenure. 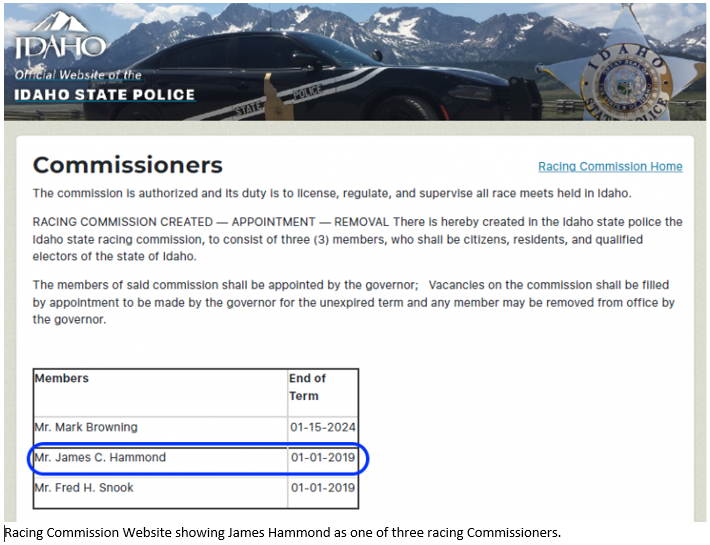 Other members of JH Benefits, LLC include Randy Oaks of the Alabama based, Greene Group. The Green Group owns the Coeur d’Alene racing park, which is managed by Doug Okuniewicz.

The Greene Group is a foreign corporation relative to the State of Idaho, as are most of its subsidiaries. While Idahoans should welcome out-of-state investment as one method for creating jobs, Idahoans should be cautious when special interests seek to use tax dollars to subsidize their ventures or buy the allegiance of our politicians.

Dog racing is known to be a taxpayer subsidized, recreational activity in certain other states, with the gambling industry lobbying state governments to subsidize it. Doug Okuniewicz’s heavy involvement in the gambling/gaming industry and his connection to the Greene Group in particular is irrefutable. As a registered lobbyist for a potentially taxpayer subsidized gambling industry, Okuniewicz’s ability to fairly represent the Idaho taxpayer is highly suspect.

What better way to “expand gaming,” “get legislative approval” or secure taxpayer subsidies for your gambling enterprise than to become a state legislator?

If true, the reported animal cruelty issues surrounding the Green Group’s Post Falls dog racing track should be enough to cast a doubt on the intentions and integrity of every organization and individual involved.

Illegal conduct involving “mail fraud,” as with the case against Allen W. Stewart and his associates at Greene Group subsidiary, Alabama Reassurance Company, should not go unnoticed.

Idaho Code 74-402 provides the Policy and Purpose of Ethics in Government. 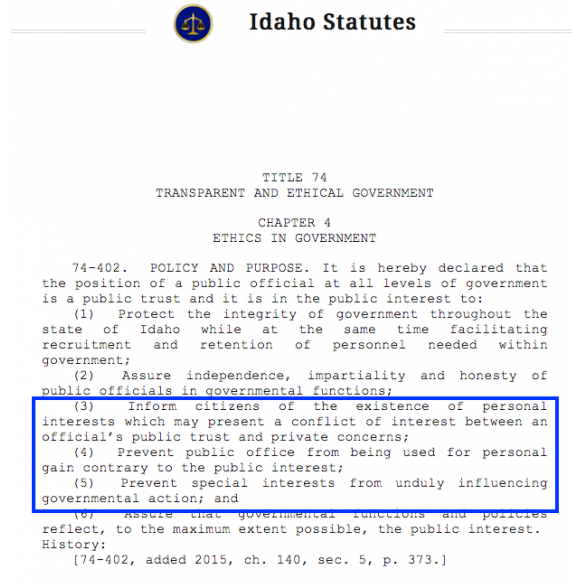 Since publishing the above, we have received additional information regarding how certain northern Idaho Republican precincts/districts previously censured Republican Gubernatorial candidate, Tommy Ahlquist, who ran as a Republican with a history of donating to Democrats.

This document is a reprint of an article written by Betsy Z. Russel, published by the Spokesman Review on October 9, 2017. Several Kootenai County Republican Central Committee members are quoted in the article, including high-ranking party officers, Bjorn Handeen, Duane Rasmussen and 2020 Idaho Senate Candidate, Alex Barron. Duane Rasmussen is quoted as saying that, “it is a cardinal sin to contribute to Democrats.” Bjorn Handeen’s comments even include a swipe at donations to “moderate Republicans.”

The resolution censuring gubernatorial candidate, Tommy Ahlquist, can be found on Page 3 of this document.

It will be interesting to watch the reaction of Kootenai County Republican officials to these revelations about Doug Okuniewicz.

Idaho Code 74-402 provides the Policy and Purpose of Ethics in Government.

Idaho Code 74-402, guards the public from conflicts of interest.

Paragraphs 3, 4 & 5 focus on personal interests, public trust and special interests unethical influence on government. IC 74-402 was put in place to guard against conflicts of interest.

The Greene Group of companies already has a tarnished history regarding issues of public trust. Doug Okuniewicz is a racing/gambling industry lobbyist. Considering Commissioner Hammond’s existing relationship with Doug Okuniewicz, it could be considered a conflict of interest when legislation involving racing, gambling or other forms of gaming are involved. 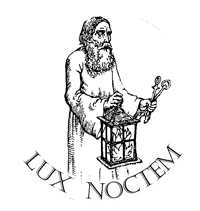 *The Platform Adherence Committee is a Republican organization created to enforce Republican candidate compliance with the Republican Party Platform. We are not affiliated in any way with the Platform Adherence Committee and we neither oppose nor endorse them. We tip our hat and applaud their efforts to expose the flow of campaign funds through their cash tracing software. Their cash tracing software was used extensively in researching this report.