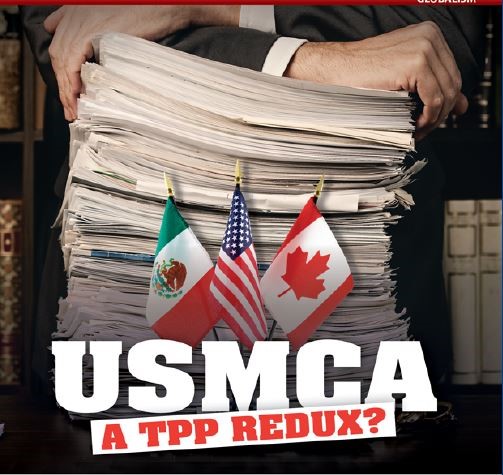 The USMCA passed the Senate today 89-10, with Sen. Pat Toomey the only Republican Senator to vote against it.  Senate Inhofe did not vote as he was not there.  The agreement now goes over to the President to sign.

As disappointing as it is, let’s throw some perspective onto it.

During the first battle to stop the North American Union (NAU), we won!  The battle ran about five years, so we had plenty of time to pull together support.  It certainly helped that the globalists then were audacious enough to reveal their plans on websites, books, and other publications.  It was fairly easy to expose as we pointed directly to their own words.  Others caught the graveness of the matter and helped us expose the enemy.

Prior to the USMCA battle, we were thrilled that then-candidate Trump raised the level of awareness of the trade agenda by slamming NAFTA, TPP, and TTIP.  We were cautiously optimistic, but had no targets to aim at.  Once the text was available in Nov. 2018, we quickly moved ahead with the limited resources we had and did the best we could.  Trade Promotion Authority (TPA) or Fast Track certainly aided the globalists on this one, setting up a scenario that rammed through the text in record time.

If it were not for the TPA or for impeachment, the USMCA might still be languishing in the House with Democrats fighting to add in their changes.  Speaker Pelosi may have sat on it until after the election or perhaps even until the next President.  However, as Art pointed out, the impeachment rallied the base of Republicans around Trump, so much so that there was nearly zero opposition on the “right” while the “left” plunked in many of the goodies they could not have gotten through Congress on its own.  Even the AFL-CIO was in favor of it, and it rarely likes trade deals.

Tonight the globalist elites are smiling.  But even they know that the war is not over.

When we lost the NAFTA battle, again as Art pointed out, we made the mistake of dropping it like a hot potato.  We won’t make that same mistake this time.

Instead, we know where the problem spots lie in the agreement, so Research will be focused on following the progress of the creation of the Free Trade Commission, and the ramifications that will come about due to its 19 or so committees.  We’ll track the progress to the NAU and expose all the details that directly affect the liberty of Americans and our independence.  The enemy does not get to enjoy a cloak of darkness this time.

Don’t let this setback get you too down.  It could be that this is the beginning of something that will awaken the great sleeping giant and fill him with great resolve.  And with all the Birching we did on the USMCA, it created a foundation to help launch the Stop the Globalists’ Trade Agenda.

Regardless of the outcome, please know that the work you did on the USMCA is very much appreciated!  This is just one more instance of The John Birch Society standing tall for the truth, all while having to battle our friends and others who should know better.  As our national field director has pointed out in the past, don’t be too discouraged as we know that in the very end, we win.  The back of the Book proves it!

One of our hurdles to overcome is to find better ways to connect with our fellow Americans.  To better understand their hot buttons, so we can create the urgency needed that demonstrates their hot buttons will be taken away as our liberty fades.  How can we get them to care about our intangible projects?  By making these intangibles into something tangible that are felt by every American.

As we lick our wounds and steel our resolve, let’s find a way to pass that resolve along to our unsuspecting fellow Americans who think that today we just got a great deal.

If you don’t know why JBS opposes the USMCA and wish you did, we have made it easy to understand. Please feel free to click here to download the Issues Index that will give you all the evidence you need that is linked directly to the USMCA trade agreement itself!

If you are still inclined to contact your congressman and senators, I would review the sheet and send it to them asking if they have any idea what they have done.