If Passed, the USMCA Is a Bigger Threat to America Than Russia, China & Iran Combined! This Will Be the End of America! 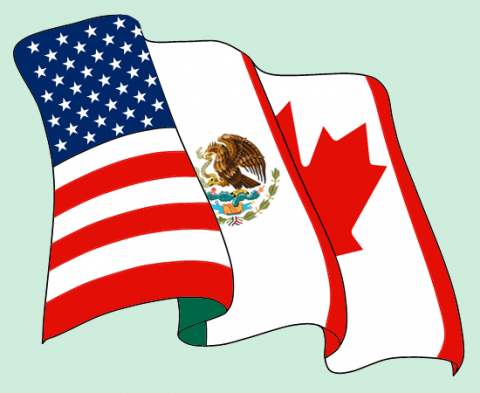 If Passed, the USMCA Is a Bigger Threat to America Than Russia, China & Iran Combined! This Will Be the End of America!

America better wake up! Americans are about ready to lose their country in perpetuity and the amazing thing about this major challenge to individual freedom and national sovereignty, is that President Trump is taking the word of his advisors and is in favor of this legislation which gives away all aspects of our government and individual liberty with no concessions from the globalists who have hand-crafted this communist legislation.

They call it the USMCA and this behemoth sovereignty-robbing legislation is 1,809 pages and contains 1,572 pages for the treaty chapters, 214 pages for additional annexes, and 23 pages of side letters which will serve as the administrative “rule of law.”  There can be no question that all of America will be forced into the Agenda 2030 UN program with its controlling ‘Sustainable Development’ 17 Goals.

There is one big, very big red flag for all conservatives, especially conservative Christians. The baby killing political party, the terrorist (Soleimani) supporting party, the deconstruction of the American culture political party, the Democrats, are in favor of the USMCA, and this should be enough to sound the alarm that the America that you know, is about to be thrown upon the junk heap of history.  Most Democrats supported the NAFTA, CAFTA, FTAA as well as the Trans-Pacific Partnership when those agreements were totally supported by the globalists and their minions from Democrat Presidents Bill Clinton, Barack Obama and the very liberal, John McCain.

Free trade agreements are all about handing off government power from duly elected representatives and their subsequent appointees, to unnamed and unregulated bureaucrats who are wholly opposed to national sovereignty, guaranteed liberties and personal freedom including fundamental precepts such as property ownership.

NAFTA, as its called, instantly put 3 million illegal aliens into the United States. This was the #1 goal of this free trade agreement. The reason that we are seeing unbridled and out of control immigration around the world, in first world countries, is that the globalists want to destroy the economic, political and cultural standards of each first world country. Why? Because the resulting desperation will promote the universal acceptance of a new world order as an alternative to the resulting chaos.

NAFTA put 3 million illegal aliens in America, because NAFTA policies bankrupted the farmers in Northern Mexico. These poor people felt that they had little choice. The Mexican farmers were sold out in this deal because the balance of trade with China was upside down, just like it was with America until President Trump reversed these policies, at least until the USMCA came along.

NAFTA destroyed parts of our agriculture by imposing Agenda 21 policies, thus causing many American farmers to go bankrupt, especially in places like California where extreme environmentalism forced many farmers from their land. The restrictions would be temporarily removed and people like Diane Feinstein’s husband, Richard Blum, would buy up the land and sell it to the Communist Chinese Party along with the food.

NAFTA gave the Chinese a foothold in Mexico. Since that time, Mexico’s main government-owned oil company, PEMEX, fell under CHICOM control. Additionally, Mexico was able to fully assert its power and authority into Mexico’s lucrative illegal drug trade by controlling the cartels and treating them as a subsidiary of the Communist Chinese Party and tribute was paid to Mexican Presidents’ such as Pena, who is a business partner of Nancy Pelosi.

NAFTA unsuccessfully attempted to eliminate the natural health care industry through a practice perfected in the European Union, called Codex Alimentarius.  The EU subscribes to Code Alimentarius and in places like Germany, it takes a prescription and about $100 to get a supply of vitamin C. The US narrowly missed falling victim to this pro-big-pharma policies which would have required everyone to get a prescription for literally everything used to treat anything. Under the USMCA, Codex is back with a vengeance

Transportation was to be totally controlled by NAFTA. The NAFTA superhighways which stole, through eminent domain and its underpricing valuations of farm land in Texas, the victimized farmers in Texas along the I-35 corridor lost nearly everything. This corridor was to stretch from Mexico to Canada. NAFTA proponents hired an Australian firm (McClatchy) to buy up much of local media along the planned I-35 route so that the victimized locals could not protest. Any I-35 competing right of way road, under NAFTA was ineligible for funding for maintenance, thus causing many roadways to become unusable through the implementation of these non-compete clauses. Many farmers were forced off of their land for mere pennies on the dollar. Because of the non-compete roadway clause, lucrative toll roads lined the pockets of the international bankers.

Alex Jones’ previous guest host, Bob Dacy, was actually my very first radio guest on KBSC. I found Bob on the internet as he was fighting against the Trans-Texas Corridor (NAFTA super highway). My community was falling victim to a new free trade agreement called the Central American Free Trade Agreement (CAFTA). Bob’s expertise was invaluable. I credited both Bob and my friend, Ernie Hancock for their role in saving my community northwest of Phoenix in unincorporated Maricopa County. Bob provided me with the knowledge to successfully combat CAFTA in the media and Ernie overcame McCain’s role in obstructing my group from obtaining legal representation, as we were eventually successfully represented by the Goldwater Institute where we forced the globalists to back down.

It should also be mentioned that the North American Union was running parallel to NAFTA. This was to be the blending of our currency, our economic policies, our business policies and our political policies with that of Canada and Mexico. If this agreement had reached the implementation stage, most Americans would be living a lifestyle and standard of living similar to the present-day people of Mexico. In parts two and three of this series, it will be made clear how these nation-destroying policies will once again rear their ugly head under the USMCA.

This is where Dave Hodges came into the picture. CAFTA was the creation of Ted Kennedy and John McCain (what could possibly go wrong?).

The CAFTA forces wanted to build a multi-modal hub in our spread-out community in order to serve the CAFTA highway that was to run through our area in the eventual build-out. The globalists also needed us off of our land because we sit on the Arizona’s largest underground water supply.

CAFTA expanded regionalism to include not just Canada and Mexico, but expanded it to all of Central America. Unbridled immigration was the official policy with no tariffs. Just like NAFTA, say goodbye to American manufacturing and related jobs. Essentially, CAFTA was NAFTA on steroids. It is also the agreement that created alliances that resulted in creating organizations to organize for a one-day Red Dawn invasion of the United States.

After an eight year battle, our group, the Arizona Coalition to Protect Personal Property Rights, was successful as we defeated the CAFTA forces and saved our community. At least we defeated them for now.

The Free Trade Area of the Americas (FTAA)

The Free Trade Area of the Americas (FTAA) was essential NAFTA + the North American Union + CAFTA on extreme steroids. This agreement contained the same principles as the previous two agreements. For example, there would be unlimited migration, one uniform currency among all nations. Can one only imagine what the dollar would have been worth as you traded it in for the regional currency? Your money value, as an American would have plummeted as currencies such as the Peso and the Dollar would have been equalized at a midpoint. Some of you Americans would have lost 70% of your purchasing power, but would have retained the same tax rates (eg property taxes). The FTAA has been abandoned in favor of the current USMCA.

The TPP expanded trade agreements from this hemisphere into the Pacific Rim and Asia. The policies of the TPP were egregious. Congress was prepared to pass this agreement without being permitted to even read it. The TPP established an international corporate dictatorship over the member nations including the United States. It was to be the end of civil liberties, judicial oversight and political sovereignty. This would have been a total dictatorship imposed upon the people of this country with no, and I mean no civil liberties or economic freedom.

As an aside, the TPP was to eventually plug into EU. The direction of these agreements should be clear, it is encroaching globalism and the creation of a satanically inspired New World Order. Oh, did I not mention, religious freedom was among the first causalities of these agreements, especially the TPP.

While you are worried about Iran and domestic terrorism, as you should be, you also need to worry that your country is very close to being given away to the globalists. Our nation’s ability to even defend itself is even in question. By the way, this is exactly what Jade Helm 15 & 16 were all about. These 2 years of drills were about subjugating an America in rebellion against this New World Order takeover!

In part two of this series, I will be detailing the loss of individual freedoms which will be experienced under the USMCA. Christians, you better prepare to go underground with your religious practices. This agreement is not just a free trade agreement, it is the return to high tech feudalism.  Prepare your hands, because here comes the Mark of the Beast.

Dave Hodges has been publishing the Common Sense Show since 2012. The Common Sense Show features a wide variety of important topics that range from the loss of constitutional liberties, to the subsequent implementation of a police state under world governance, to exploring the limits of human potential. The primary purpose of The Common Sense Show is to provide Americans with the tools necessary to reclaim both our individual and national sovereignty.