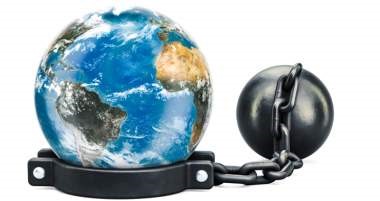 Under the guise of saving the planet from supposedly dangerous humans, plastics, and free markets, governments and dictators attending the Fourth United Nations Environment Assembly in Nairobi, Kenya, adopted declarations to hijack control of the global economy and “transform the way we live.” Among the key goals of the UN’s “bold blueprint for change,” as the agreement was described, is a “new world order” that makes consumption and production “sustainable.” But in reality, as this magazine has documented extensively, the UN-backed ideology of “sustainable development” has less to do with protecting the environment and more to do with restricting the freedom of human beings. This global “green” new deal makes that clear, too.

While UN globalists typically use opaque language to disguise the real agenda, in this case, UN bosses celebrated the emergence of a “new world order” in which the UN’s ideology of “sustainability” will reign supreme. “We are delighted that the world has responded here in Nairobi with firm commitments to build a future where sustainability will be the overarching objective in everything we do,” said UN Environment’s Acting Executive Director Joyce Msuya. “If countries deliver on all that was agreed here and implement the resolutions, we could take a big step towards a new world order where we no longer grow at the expense of nature but instead see people and planet thrive together.”

The latest conference, held last week under the guidance of the UN, was based on the claim that the planet is in danger due to human activities. In particular, the summit revolved around a new report — conveniently produced by the same UN “environmental” agency hosting the gathering — claiming that environment is doomed unless humanity submits to global controls and regulation. All sorts of discredited hysteria and boogeymen such as predictions of “sea-level rise,” plastic pollution, and “climate crisis” were touted to justify the radical policies being advanced by governments and tyrants at the summit.

Leaders of the UN conference were hardly shy about revealing the scope of what is being proposed. “The world is at a crossroads but today we have chosen the way forward,” gushed Siim Kiisler, president of the Fourth UN Environment Assembly and the Estonian government’s top environmental official. “We have decided to do things differently. From reducing our dependence on single-use plastics to placing sustainability at the heart of all future development, we will transform the way we live. We have the innovative solutions we need. Now we must adopt the policies that allow us to implement them.” (Emphasis added)

The controversial ideology of “sustainable development,” which underpins everything the UN Environment Assembly does, claims to be about preserving the planet for future generations. However, critics frequently refer to proponents of this ideology as “watermelons,” because they are “green on the outside, but red on the inside.” And indeed, the 2012 UN Conference on Sustainable Development in Rio de Janeiro made this clear. In fact, it was literally chaired by a Red Chinese Communist. And it took place to promote what the UN and countless officials described as a “green” world order in which central planning and government control of the economy would be crucial.

More recently, the UN’s member governments and dictatorships agreed to the Agenda 2030 “Sustainable Development Goals.” Essentially, these goals would re-organize human society, with governments ordered to redistribute wealth within and among nations, indoctrinate all children into the “sustainable development” ideology, seize control of production and consumption, and much more. After the UN scheme was accepted by governments and dictators around the world, the mass-murdering Communist Chinese dictatorship boasted that it played a “crucial role” in creating the UN scheme. Fortunately, despite being signed by Barack Obama, it has never been ratified by the U.S. Senate.

Heads of state at the latest UN meeting openly demanded a global regulatory regime. Politically toxic French President Emmanuel Macron, a globalist who has virtually no support among his own people, celebrated the exploitation of children as pawns to promote the agenda. “We believe that what we need, given the situation we live in, are real laws, rules that are binding and adopted internationally,” he declared at the UN summit in Nairobi. “Our biosphere faces total devastation. Humanity itself is threatened. We cannot simply respond with some nice-sounding principles without any real impact.” He demanded “faster, more forceful action” to supposedly save the planet from humanity.

With the American media largely missing in action, the UN body adopted a variety of “declarations” and “resolutions” advancing totalitarian policies and wealth redistribution. For instance, in keeping with the UN Agenda 2030, the UN Environment outfit adopted a “final declaration” demanding that “unsustainable” patterns of “consumption and production” be changed. Of course, governments control production and consumption in totalitarian societies such as Cuba, North Korea, Venezuela, and so on — ironically, some of the most poverty-stricken and polluted nations on the planet. In free societies, private-property owners and consumers — free people — make decisions on consumption and production.

That same UN “declaration” also called for governments to manage the “natural resource base of economic and social development.” In other words, centralized control of natural resources is called for, with private-property owners cut out of the picture. Again, societies based on private property and free markets such as Switzerland, the United States, Japan, and others are among the wealthiest and cleanest, while nations where government controls resources are among the filthiest and most polluted. But according to the UN declaration, said government management and control “are the overarching objectives of, and essential requirements for, sustainable development.”

In the same UN declaration approved by some 170 governments and dictatorships, the UN called on all governments to develop strategies for controlling and managing resources. “We will improve national resource management strategies with integrated full lifecycle approaches and analysis to achieve resource-efficient and low-carbon economies,” the resolution declared, as if governments were needed or even useful in achieving resource efficiency. In the real world, private economic actors in the market have a vested interest in efficiency, while governments and bureaucracies are unimaginably wasteful. The whole “low-carbon” agenda is based on the demonstrably absurd premise that carbon dioxide — the gas of life — is somehow “pollution.”

Another one of the key pretexts underpinning the whole UN environmental agenda advanced at the summit was the notion that the world’s oceans are chocking on human waste — especially plastics. But as with so many other environmentalist fear-mongering tactics, the facts show that the scare is largely bogus. In a report for the non-profit Heartland Institute, a coalition of prestigious scientists found that the hysteria, mostly promoted by fringe extremist groups such as Greenpeace, “is largely fabricated, and is based on cherry-picked distortions of the scientific literature.” Indeed, the alleged crisis simply is not real, the scientists found.

And yet, despite being based on fraud and baseless fear-mongering, the UN Environment Assembly adopted a resolution demonizing plastics and committed to create a “multi-stakeholder platform within UN Environment to take immediate action towards the long-term elimination of litter and microplastics.” Another resolution adopted by the UN outfit called on governments and dictators to address the alleged problem of marine litter by waging war on plastics that consumers and producers use to do everything from packaging and transporting food to delivering crucial healthcare supplies. Among other demands, the declaration called for “significantly reducing single-use plastic.” As usual, the poor will be the most hard-hit from the UN’s war on markets, low-price goods, and efficiency.

The UN deal comes shortly after the environmental movement in the United States, which has received funding and support from the Kremlin to undercut U.S. energy production, became a global laughing stock with the “Green New Deal” proposed by Representative Alexandra Ocasio-Cortez (D-N.Y.). Among other absurdities, the proposal, which has strong support among radical Democrats in Congress, calls for eliminating “farting cows” and air travel within the next decade. Unfortunately, this “green” agenda represents a global movement to expand the size and scope of government, restrict human liberty, undermine Western civilization, and centralize power at the regional and global level. Americans must continue to resist.

Alex Newman, a foreign correspondent for The New American, has been at many of the UN climate summits over the last decade. He can be reached at anewman@thenewamerican.com. Follow him on Twitter @ALEXNEWMAN_JOU or on Facebook.